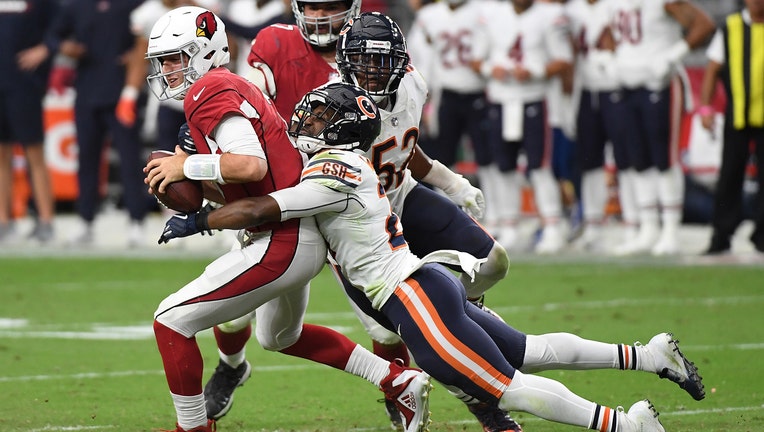 GLENDALE, Ariz. (AP) - Another opportunistic day by the Chicago defense has the Bears at 2-1 and alone in first place in the NFC North for the first time since late in the 2013 season.

The Arizona Cardinals, meanwhile, have joined the parade of teams with a rookie quarterback on the field.

Cody Parkey kicked his third field goal of the game, a 43-yarder with 4:31 to remaining, to rally the Bears to a 16-14 victory over the winless Cardinals on Sunday.

"It doesn't take a rocket scientist to realize we are winning games because of our defense," Chicago coach Matt Nagy said. "They are playing fast right now."

The Bears forced four turnovers on four consecutive Arizona possessions in the second half.

Sam Bradford threw two first-quarter touchdown passes to put the Cardinals up 14-0, but was replaced by rookie Josh Rosen after fumbling the ball away deep in Chicago territory late in the game.

Rosen, the 10th overall pick in this year's draft out of UCLA, drew a standing ovation from the Cardinals crowd as he jogged on the field.

"I just told him to go get the win," Bradford said, "be him, go out there and do what he is capable of, lead this team."

Rosen drove Arizona past midfield, but on fourth-and-5 from the Bears 45, his pass was intercepted by Bryce Callahan with 1:10 to play.

Arizona got the ball back one more time. Chicago picked off Rosen again, this time returning it for a touchdown, but an offside penalty negated the play and the game ended with Rosen sacked by Sherrick McManis, who also had one of two of Bradford's interceptions.

Coach Steve Wilks said he made the quarterback change because "I felt like we needed a spark."

As for the starter next game, "We're going to evaluate Josh as well as Sam. We're going to watch the tape and we'll see exactly what I want to do as far as moving forward with that."

Clinging to a 14-13 lead, the Cardinals drove to the Chicago 21 early in the fourth quarter but the scrambling Bradford was tackled by Khalil Mack. Bradford fumbled and Danny Trevathan recovered at the Bears 16.

"I knew he was going to have the ball in his right hand, got my head out of the way because that's a big part of the rules nowadays, and tried to make a play," Mack said. "It was what we worked on all week."

Chicago, with the help of an unnecessary roughness penalty on Tre Boston, drove downfield and got the go-ahead field goal.

With a good share of the crowd cheering them on, the Bears (2-1) intercepted three passes and recovered one fumble. Arizona is 0-3 for the first time since 2004.

But it was the Cardinals getting off to a fast start.

Arizona's offense, which had scored a total of six points in two lopsided losses entering the game, took the opening kickoff and went 75 yards in just five plays.

The Bears responded with a run-oriented drive to the Arizona 13. But on third down, Bene Benwikere and Budda Baker, blitzing from each side, dropped Mitchell Trubisky for a 15-yard loss and Parkey's 46-yard field-goal try was wide right.

Arizona went three-and-out but on the next series, Robert Nkemdiche stripped the ball from Trubisky and Corey Peters recovered at the Chicago 21.

On the next play, Bradford threw 21 yards to David Johnson in the end zone to make it 14-0.

The Bears used 5:27 on an 11-play drive that stalled on the Arizona 2 and Chicago settled for a 20-yard field goal by Parkey to cut the lead to 14-3. The driving included roughing-the-passer calls against Nkemdiche and Markus Golden that had Wilks livid on the sideline.

The Bears finally got in the end zone on Howard's 1-yard run that cut Arizona's lead to 14-10 with 6:16 left in the third quarter.

Chicago went for it on fourth-and-1 at the Cardinals 19 and barely converted on a 1-yard shovel pass to Allen Robinson II.

Mack had another impressive day for the Bears with two sacks, a tackle for loss, a forced fumble and three quarterback hits.

Chicago cornerback Prince Amukamara left the game in the third quarter with a hamstring injury.

Bears: are home against Tampa Bay on Sunday.