The former President is in the Valley to campaign for various Democratic candidates in Arizona. The event is taking place as polls show a tight race for a number of federal and statewide offices. FOX 10's Stephanie Bennett reports.

He made a stop at Cesar Chavez High School, located at 3921 W. Baseline Road, on Wednesday, Nov. 2.

"Arizona elected and community leaders will also participate in the program. At the event, President Obama will rally voters, encouraging them to turn out and vote early for Democrats up and down the ballot," the Arizona Democratic Party said in a news release on Oct. 30.

Doors opened for the event at 5:30 p.m., and Former President Obama spoke following Sen. Kelly's speech, at around 7:45 p.m.

While Arizona's electoral votes did go to Joe Biden in the 2020 election, Former President Obama himself failed to win Arizona in 2008 or 2012. Now, Democratic Party supporters hope their best communicator can help push undecided voters into the blue column.

"I believe he will have an effect, but it’s actually going to take the people to make that effect happen," said Lynnfred Smith.

"I'm not looking for miracles, but anything that we can do in a tight election to bring just a few more people onboard is worth the effort," said Jamie Horton of Gilbert.

Republicans among those who attended event

During his speech, Former President Obama touched on various subjects, from education, the economy, to the COVID-19 Pandemic. He also called on people to go out and vote.

"You got to go and vote," said the former president. "You got to pull them up. Make sure they are voting early or take them with you in person on Election Day."

"I hope and pray that someday I can cheer for Republican candidates again, but not this year, because the party that I know has been lost, and this has become an election to save our country and great state," said Giles.

There have been known cases of Republicans supporting Former President Obama. The GOP nominee for Arizona governor in this election, Kari Lake, supported Obama during his campaign. She ultimately switched sides, however.

There were many young people at the event, including students at Cesar Chavez High School, who say they couldn't believe their school was selected for the event.

Some students were standing in line since 12:45 p.m. in order to be the lucky first few to get into the venue.

"It’s just a monumental experience that I couldn’t miss," said Lynae Berry Hill. "I was, like, how am I going to call out of work?"

"Whether it’s a canvass or going to our house or Obama coming and talking to a bunch of adoring fans, he reminds people what we are fighting for," said another event attendee, identified onl as ‘Jaimie.’

Obama was not the only former president to have made a campaign stop in Arizona.

2022 Arizona General Election voter guide: What you need to know 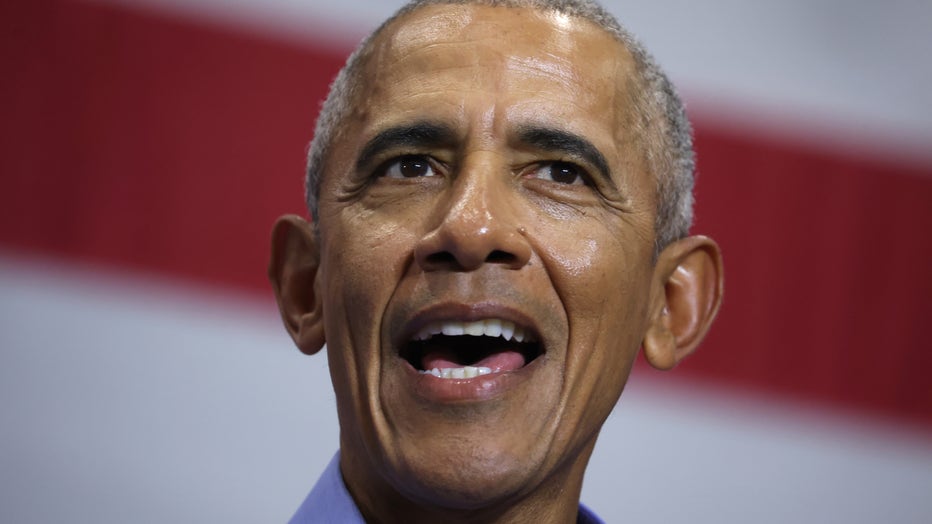 Newsmaker: Blake Masters and Mark Kelly race to the Senate

In a highly contended race, Blake Masters and Democratic incumbent Mark Kelly are vying for a seat in the U.S. Senate to represent Arizona. We're hearing from both candidates as the polls show Trump-endorsed Masters and Kelly neck and neck. In the second part of this episode, Matt Towery, chairman and founder of InsiderAdvantage, talks with John Hook. His company is exclusively doing the polling for FOX 10 this election cycle.

A new FOX 10 InsiderAdvantage poll shows the race for Governor - widening a bit. But the race for U.S. Senate is turning into a dead heat.

Campaigning for political power in Arizona is heating up as the midterm elections are now less than a month away, and candidates from both sides spent the weekend trying to win over voters.