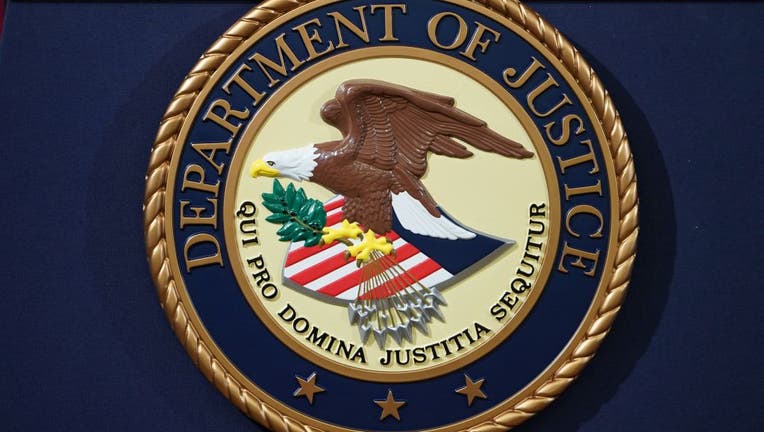 The Department of Justice seal is seen on a lectern. File photo by Mandel Ngan/AFP via Getty Images.

PHOENIX - Nine people in Arizona have been indicted on allegations they fraudulently obtained more than $23 million in government pandemic assistance.

Federal prosecutors allege Jason Coleman, 40, and Kimberly Coleman, 38, of Mesa conspired to prepare and submit about two-dozen fraudulent applications seeking $30 million in loans under the Paycheck Protection Program (PPP). They received $13 million from 10 of their applications, according to prosecutors, who say the couple submitted fake employment data and fictitious payroll.

The PPP program gave employers billions of dollars in low-interest loans that would be entirely forgiven if the money was used for specific purposes such as payroll costs. The program was created early in the COVID-19 pandemic as officials ordered many businesses to close and urged people to stay home.

Authorities alleged the Colemans used the money to purchase four properties including a $3.8 million home, luxury vehicles, furniture and investments.

Jason and Kimberly Coleman pleaded not guilty on Dec. 15 to charges of conspiracy, bank fraud, wire fraud and transactional money laundering. A magistrate ordered both detained pending trial, ruling they are a flight risk and a danger.

A lawyer for Kimberly Coleman, Joshua Kolsrud, declined to comment. Jason Coleman's attorney could not be reached, but a receptionist said the firm doesn't comment on cases.

Meanwhile, a grand jury also issued eight other indictments of seven people from the Phoenix area accused of conspiring to defraud the pandemic relief program:

"Indictments are only accusations, and a defendant is presumed innocent unless and until proven guilty," stated the U.S. Attorney's office.

The cases were investigated by the FBI with assistance from the Internal Revenue Service - Criminal Investigation, Homeland Security, and the Small Business Administration-Office of the Inspector General. The U.S. Attorney's Office says District of Arizona-Phoenix attorneys are handling the prosecutions.