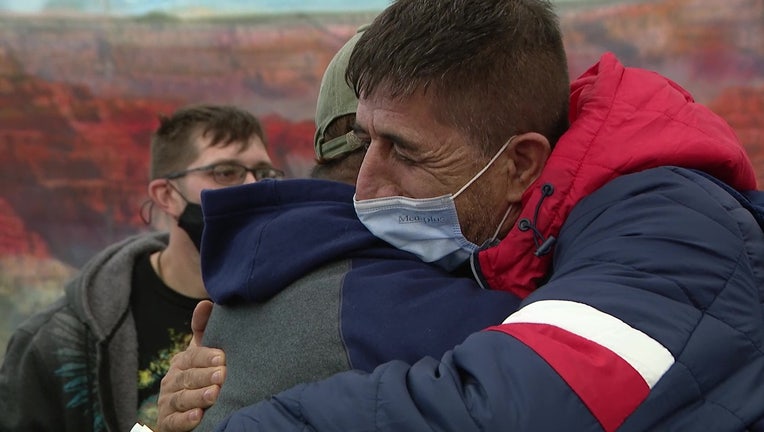 Mhammad Armin Khalili hugging a person who helped get him out of Afghanistan at Sky Harbor.

PHOENIX - In August, an Afghan interpreter spoke out when he called on President Joe Biden to get him out of Afghanistan as he was hiding from the Taliban.

Almost six months later, that interpreter is now in Arizona with his family, thanks in part to some Arizona military members he worked alongside.

When we first reported on the story, the interpreter was identified only as ‘Mohammad’ for safety reasons. At the time, Mohammad was still in Afghanistan, and could become what his Arizona friends call a ‘trophy.’

Now that he is safe, we have learned that Mohammad's full name is Mohammad Aman Khalili.

The mission to get Mohammad and his family out of Afghanistan involved the state department, safe houses, and code names. His squad mates never stopped living out the motto ‘leave no man behind’ as they coordinated efforts to get him to safety.

"They took us to a safe house. We were there 15 days. After 15 days, another guy came and took us to Mazar-i-Sharif. It was very scary for me and my family," said Mohammad.

At the end of Mohammad's long journey, Brian Genthe, an Arizona National Guardsman and Purple Heart recipient who worked alongside Mohammad, was there to greet Mohammad, along with other squad members.

"It’s finally ending. It hasn’t hit me yet," said Genthe. "We spent all morning getting the apartments ready, but we’ve been in total communication. As soon as he hit LAX, he called. It’s a very special moment for us."

Mohammad and his family were granted a special immigrant visa, and spent the last two months going through various health screenings leading up to this moment. He says, if at all possible, he’d like to meet President Biden to show appreciation and talk about a rescue back in 2008.

Mohammad's initial request to the president came more than a decade after he helped rescue Biden.

"To leave an American interpreter in Afghanistan is a death sentence," said Cpt. Dennis Chamberlain (Ret.) back in August 2021, who was with the Arizona National Guard's 1st Battalion, 158th Infantry Regiment.

13 years ago, President Biden, who was a senator at the time, along with Sens. John Kerry and Chuck Hagel, were stranded in a remote valley of Afghanistan. They were on board two helicopters forced to land in a snowstorm. Eventually, Chamberlain and his platoon made the trek to rescue the Senators.

To this day, Chamberlain remembers how Mohammed helped them.

"Two Black Hawk helicopters sitting on the mountain in Afghanistan would draw a certain amount of attention. He was key in communicating our military mission to the local nationals away from our security perimeter and away from the VIP helicopters," Chamberlain said.

While Mohammed stood with other Afghan soldiers on one side of the helicopters, the 82nd Airborne protected the other side. 30 hours in the freezing temperatures passed until the U.S. military got the helicopters back in the air.

Arizonans helped get Mohammad to safety

An Afghan interpreter who aided a mission to rescue a group of U.S. Senators 13 years ago, including current President Joe Biden, is now safely out of Afghanistan after getting stranded in the country for weeks after the Taliban retook the country. FOX 10's Matt Galka reports.

For more than a month, Chamberlain helped coordinate an effort to make sure his old ally was safe.

"We had to get him out. We were up late at night talking to a multitude of people, seeing if they could really help him out, someone who could actually get him out of there," Chamberlain recalled.

They worked with the Human First Coalition, a group helping people out of the country. Since Mohammad would have been a marked man if people knew about his association with the President, secrecy was key.

It took more than 24 hours of ground transportation, dodging Taliban checkpoints, until Mohammad was able to reach the border to get into Pakistan. From there, he was taken to a military base to safety.