Arizona Democrats Sens. Kyrsten Sinema and Mark Kelly are warning President Biden against ending Title 42 border restrictions without a "comprehensive plan" in place to ensure order at the southern border -- a sharp contrast to the stance of Senate Majority Leader Chuck Schumer.

"We write to you to express great concern about the lack of a specific plan from your Administration with respect to potential changes to the Title 42 Public Health authority, which the [DHS] has relied on at the border during the coronavirus pandemic," the senators write.

"Given the impacts that changes to Title 42 could have on border communities, border security, and migrants, we urge your administration not to make any changes to Title 42 implementation until you are completely ready to execute and coordinate a comprehensive plan that ensures a secure, orderly, and humane process at the border," they say.

The Biden administration is widely reported to be considering ending Title 42 -- a Trump-era order implemented in March 2020 that allows for the quick expulsion of migrants at the border due to the COVID-19 pandemic -- when it is due for renewal next week.

RELATED: Phoenix activists call on Biden administration to end use of rarely-used policy to expel migrants

The Biden administration has kept the order in place, with some limitations, and has used it to expel about half the migrants coming to the border each month. While both administrations claimed it was a public health order, in reality it has been used as a key immigration policy -- particularly during the 2021 migrant surge.

That has infuriated immigration activists and some top Democrats -- including the Senate majority leader.

"Title 42 has been nothing short of disastrous for immigrant families seeking asylum from the horrors in their own countries," Schumer said in a call this month with reporters, according to Border Report. "It is unacceptable that this policy continues to be used indiscriminately to remove migrants with valid refugee claims from our Southern border."

"I continue to be disappointed, deeply disappointed in the administration’s response. Title 42 goes against everything this country stands for," Schumer said.

But others -- including reportedly those within the administration -- are concerned that the country is facing another migrant surge in the spring and summer months that could outpace the already massive numbers seen last year.

"A sharp end to Title 42 without a comprehensive plan in motion would significantly increase the strain on DHS, border communities, and local nonprofits that are already near or at capacity," Sinema and Kelly say.

There were 164,973 encounters in February, compared to 101,099 encounters in February last year. The Washington Post reported this week that preliminary Customs and Border Protection (CBP) data indicates that authorities are on track to have encountered more than 200,000 in March and that officials fear a "mass migration event."

Fox News reported last week that DHS has put out a call for volunteers, while on Wednesday a top Pentagon official confirmed that DHS had asked the Department of Defense for additional support due to a potential increase in numbers.

Sinema and Kelly tell Biden that so far they have not seen evidence that DHS has developed a plan to "maintain a humane and orderly process" if Title 42 ends.

While they say that the emergency authority "should not be in effect indefinitely," they also warn that "chaos at the border in a post-Title 42 scenario also negatively affects migrants’ safety and could further strain an already overwhelmed health care system at the border."

"Given the prolonged reliance on Title 42 and continued high numbers of migrants crossing the border, any changes to the authority require robust and pragmatic preplanning, clear communications with border communities and stakeholders, and advance deployment of additional resources," they say.

The lawmakers add that local government leaders and community organizations in Arizona have not been consulted about any changes to the order:

"Until the Administration does that type of consultation with local government leaders and nonprofits along the border, it is premature to consider changes to Title 42 authorities," they say. 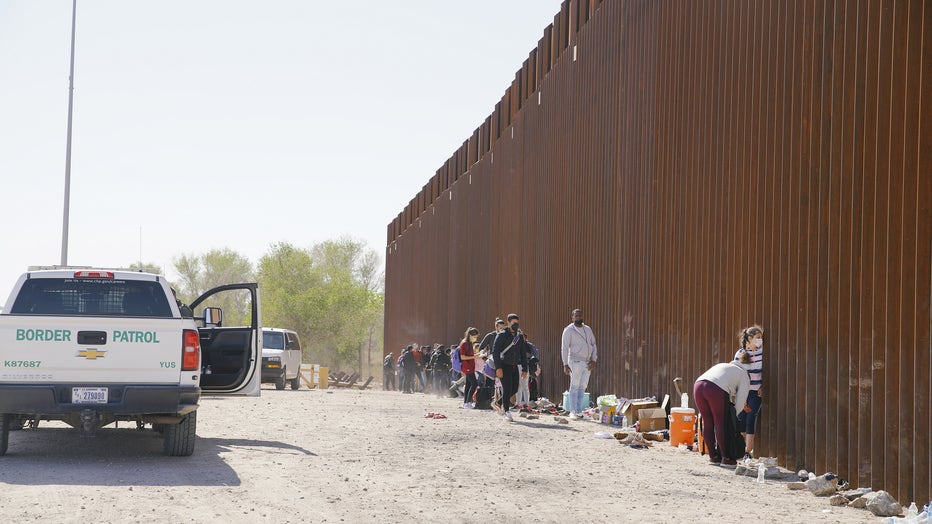 Asylum seekers from Colombia, Venezuela, and Cuba wait next to the USA border wall with Mexico, to be processed by CBP on February 21, 2022 in Yuma, Arizona, United States. (Photo by Katie McTiernan/Anadolu Agency via Getty Images)