Arizona's superintendent of schools is pushing back against a new sex education bill that's expected to get a hearing in the state senate. FOX 10's Nicole Garcia reports.

PHOENIX - A Republican state senator wants to ban sex education from some classrooms in Arizona.

Senator Sylvia Allen from Snowflake has filed a bill that would prevent sex education from being taught before the 7th grade.

There are concerns from parents about whether the new sex education curriculum is appropriate for the classroom.

Allen has scheduled the bill for a January 14 hearing in the Senate Education Committee, which she chairs.

Besides aiming to ban sex education before the 7th grade, SB1082 would, in its original version, delete the term "homosexuality" from the definition of "sexual conduct", a move that would appear to ban any discussion of homosexuality in the classroom.

State Sen. Allen, however, says people are misinterpreting the language of the bill. She says the goal of the measure is to provide parents with transparency about what's being taught to their children.

"In the entire bill, there was nothing saying homosexuality cannot be taught, so it can be, so we need to go on with what the bill is about, transparency in helping our parents know what is being taught," said State Sen. Allen. "Parents have a right to know what their children are being taught in school, and that includes everything, and if they go through the proper process, of course they can discuss that at school. I have no problem with that all. Parents should make that decision."

Democratic lawmakers have been vocal in their opposition of the bill.

"Lets the keep the law as is, because this would be a huge step backwards for Arizona kids and for all people in our public school system," said State Rep. Daniel Hernandez.

In a statement to FOX 10, Arizona Superintendent of Public Instruction Kathy Hoffman says, "While we are still analyzing Senator Allen's bill to determine what the ramifications would be for schools, districts and the Arizona Department of Education, I am appalled that it could take us backward as a state. Parents should always have a choice in what their child learns, but students deserve medically accurate, age-appropriate information to keep themselves safe and healthy." 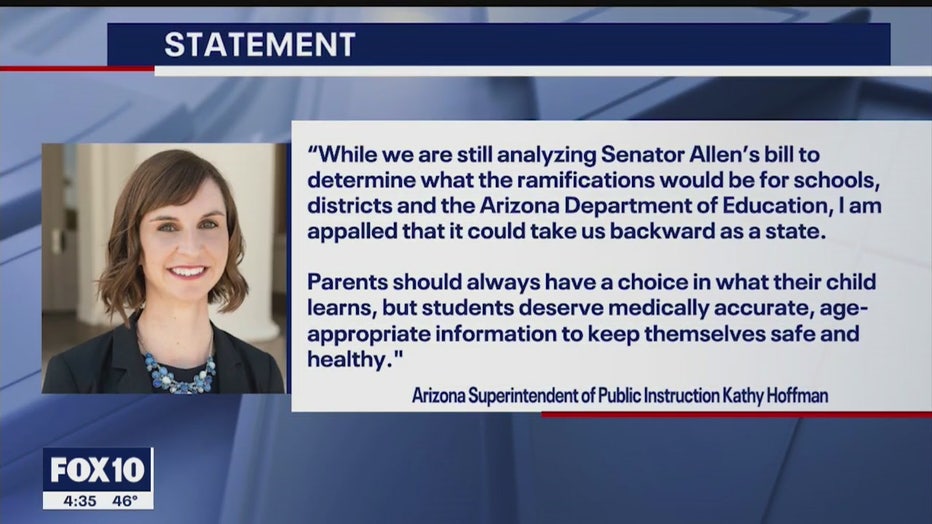 In 2019, a 28-year-old Arizona Arizona law that blocked public school instruction from "promoting a homosexual lifestyle" while teaching about HIV and AIDS ended, after the state was sued in Federal court.

On Friday, Gov. Doug Ducey refused to comment on the bill.

"I'm not going to have any more comment on bills that are going to be presented," said Gov. Ducey.

The Arizona legislative session starts on January 13. SB1082 is scheduled for a hearing on January 14.