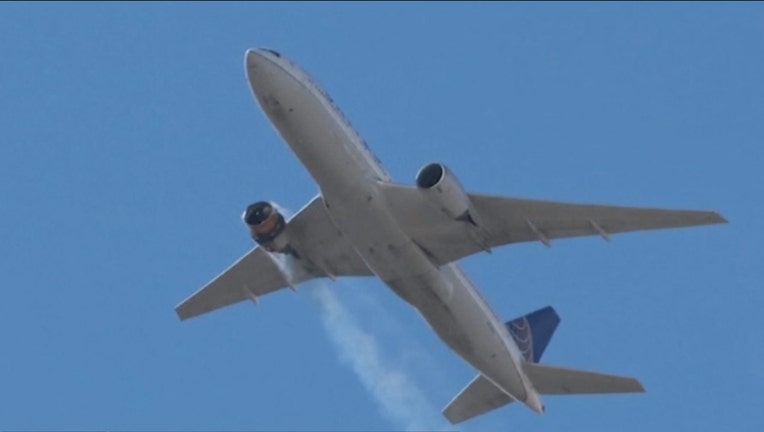 PHOENIX - As investigations into a near disaster involving a United Airlines plane in Colorado continues, an aviation expert in Phoenix is speaking out about the type of plane that was involved in the incident.

The incident happened on Feb. 20, as United Flight 328 was making an emergency landing in Denver. According to officials with the Federal Aviation Administration, a Boeing 777-200 returned to the airport after experiencing a right-engine failure shortly after takeoff. The plane was flying from Denver to Honolulu when the incident occurred.

Pieces of the casing of the engine, a Pratt & Whitney PW4000, rained down on suburban neighborhoods.

Several passengers were able to get video of the engine fully engulfed in flames mid air.Us regulators now ordering united airlines to step up inspections of those planes.United has said it will temporarily remove the aircraft from service.

On Feb. 22, Boeing recommended that airlines ground all of 777s with the same type of engine involved in the incident. Officials with the airplane manufacturer say there were 69 777s with the engines involved in service, and another 59 in storage.

In the United States, United Airlines is the only company with the engine in its fleet, according to FAA officials, with 24 of the planes in service.

"The 777 is a twin-engine aircraft," said Ed Coleman, Director of the Robertson Safety Institute with Embry-Riddle Aeronautical University-Prescott. "It's used mostly for international flights, so it’s the long-haul that they use that for. It’s reliable, it’s been around for quite some time. I think it came out in the mid 90s."

Coleman Director says this plane is meant to fly long distance over water.

"The plane is designed to fly on one engine. So that’s a plus," said Coleman. "They are designed to do that for a long time, so they can. This one here looking out and seeing the cowling missing and stuff that would’ve been a little disheartening. I’m sure the airplane was rocking and rolling because the engine was at a balance. You can think of that is driving down the road with a flat tire."

Similar incidents have happened in the past

According to the Associated Press, there have been similar incidents in recent years.

Hours before the Denver flight, a Boeing 747 cargo plane in the Netherlands suffered an engine failure that resulted in engine parts falling to the ground. Although the plane has Pratt & Whitney engines, they are different from those on some Boeing 777s, and nothing yet shows any similarity to the problem on the United plane, said Janet Northcote, a spokeswoman for the European Aviation Safety Agency.

Other mishaps appear to be closely related to the Denver incident, however.

In December, a Japan Airlines Boeing 777 with the same series Pratt & Whitney engines suffered fan blade damage and lost a large panel but was able to land safely.

In 2018, another United Airlines Boeing 777 suffered an engine failure that caused parts of the housing to break off and fall into the Pacific Ocean as the plane flew from San Francisco to Honolulu. In a report last year on the incident, the NTSB said Pratt & Whitney missed signs of cracking in previous inspections of the fan blade that broke, and it faulted the company’s training. The company told the NTSB it was fixing the shortcomings.

"There’s been a couple of other instances with the 777, with this particular type of engine, where they’ve had a blade fail like this and cause a problem. The most recent one I know it happened in 2015 in Hawaii. It was a United flight there. If you look at the pictures from that one, it looks very similar to this," said Coleman.

As far as an investigation as to exactly what happened, that could take up a year to be completed by the FAA.