SCOTTSDALE, Ariz. - A body that was recovered from a Scottsdale canal during the morning hours of July 19 has been identified as a man who went missing in the downtown area.

According to police, a passerby spotted the body which was found in a canal near Scottsdale and Camelback Roads. The body was identified by the medical examiner as 23-year-old Robert Cuillo.

"The Maricopa County Medical Examiner’s Office report has ruled the death as an accidental drowning. The report also indicates Bobby’s blood alcohol level was over the legal limit for a person to legally operate a motor vehicle. Scottsdale Police were able to acquire the GPS and tracking information from the scooter Bobby rented with his phone. Based on that evidence, it appears Bobby drove the scooter into the canal north of Chaparral Rd. The rented scooter was recovered from the canal where the GPS indicated it had entered," Bolin said.

Officials also said that flyers circulating on social media offering a reward for information about his death were not created or shared out by Scottsdale Police.

Following Cuillo's disappearance, frantic family and friends posted all over social media, asking for the community's help to find Cuillo.

"Scottsdale Police would like to remind the public to be very cautious when traveling along canals, waterways, and when using wheeled conveyance devices if they choose to consume alcohol, prescription, or recreational drugs," Bolin said.

After a detailed investigation, there are no signs of foul play, Bolin added. 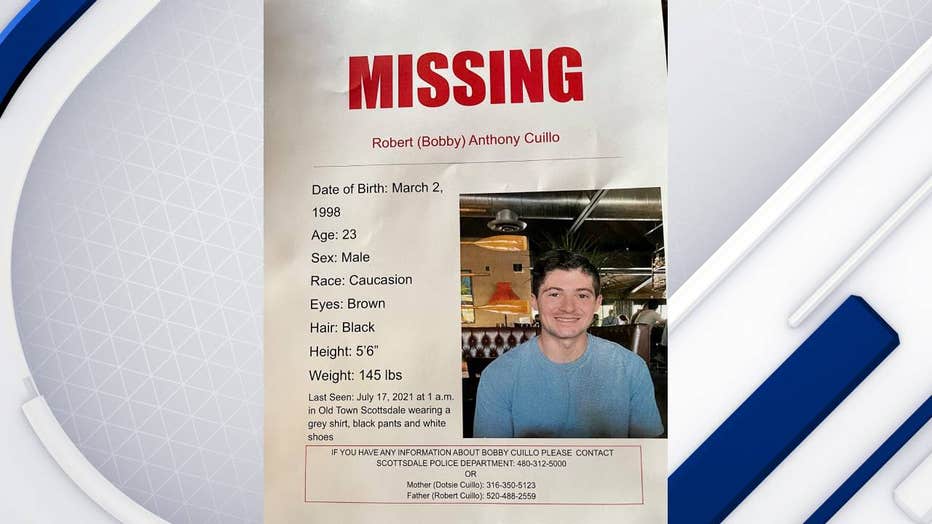 The body was found in the same area where a missing man was last seen over the weekend. FOX 10's Jennifer Martinez reports.

Cuillo was last seen on surveillance video at a nearby business called Wasted Grain and at Glass Monkey Smoke Shop.

At 11:19 p.m. Friday, two hours before Cuillo was last seen, surveillance video obtained by FOX 10 from the smoke shop shows Cuillo walking inside the smoke shop, hugging one of his buddies, and chat with friends. The whole encounter lasted about three minutes.

An hour and a half later, Cuillo walked into the smoke shop, alone. That was the last time he was seen.

An employee at the smoke shop says he saw Cuillo the night he went missing.

"Nothing seemed off. He seemed like he had it together. He wasn't drunk, wasn't going crazy, wasn't loud. He was just buying a vape," said Ryan Milosevich, who was working at the smoke shop on Friday night. "It's sad, He was a nice dude. He would come here quite often and pick up some of the vapes we had, and it's just sad. He seemed like he just came out here having a good time with his buddies, and it's just really sad."