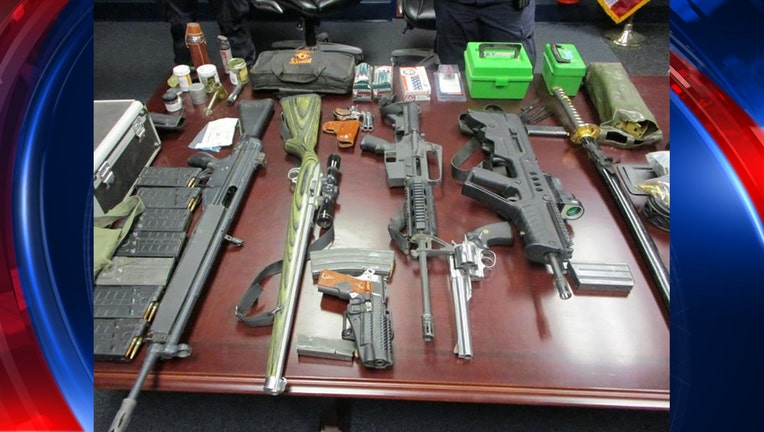 Officers seized several firearms as well as nearly 2,000 rounds of ammo inside of a smuggling vehicle. (U.S. Customs and Border Protection)

TUCSON, Ariz. - Six people were arrested for separate alleged attempts to smuggle 321 pounds of methamphetamine and marijuana through Arizona Ports of Entry over the weekend, according to U.S. Customs and Border Protection, and one of the cases involved a cache of loaded weapons and ammunition.

At the Lukeville Port of Entry on Friday, officers say a 60-year-old man from Fort Mojave, Arizona driving a Chevrolet SUV attempted to enter. He was referred for additional inspection. While officers searched the vehicle, they found a cache of eight loaded firearms and nearly 2,000 rounds of ammunition. The items were seized, along with just over a pound of marijuana worth $350.

Earlier that day at Lukeville, a CBP canine alerted to a scent on a Dodge sedan when a 29-year-old male and his 22-year-old passenger, both Phoenix residents, attempted to enter the U.S. Officers discovered nearly 50 packages hidden inside the vehicle's fuel tank.

"The contents were determined to be 65 pounds of meth, worth more than $58,000," stated CBP's Robert Daniels.

On Saturday, a CBP canine alerted to a scent when a 21-year-old driver from Sonora, Mexico in a Ford truck attempted to enter the U.S. through the Port of Douglas. Officers found over 90 packages under the vehicle's hood and back wall of the cab.

The following day, officers at the Dennis DeConcini Crossing in Nogales referred a 33-year-old Mexican female of Phoenix for an additional search of her Nissan SUV. Daniels says the search led to the seizure of nearly 132 pounds of meth, worth over $118,000.

CBP says the subjects were arrested and turned over to U.S. Immigration and Custom Enforcement's Homeland Security Investigations. Their names were not released.