People are normally aware of the homeless crisis in a number of West Coast cities, but homelessness is also a problem in the Valley. FOX 10's John Hook reports.

PHOENIX - We’re all aware of the homeless crisis in places like Los Angeles, San Francisco and Seattle, but did you know there is a huge encampment in Downtown Phoenix?

We were stunned to see the numbers of people camping out on the street. How do they end up in this circumstance? What is it like living on the street?

We often hear from officials about the problem, but rarely from the people themselves. 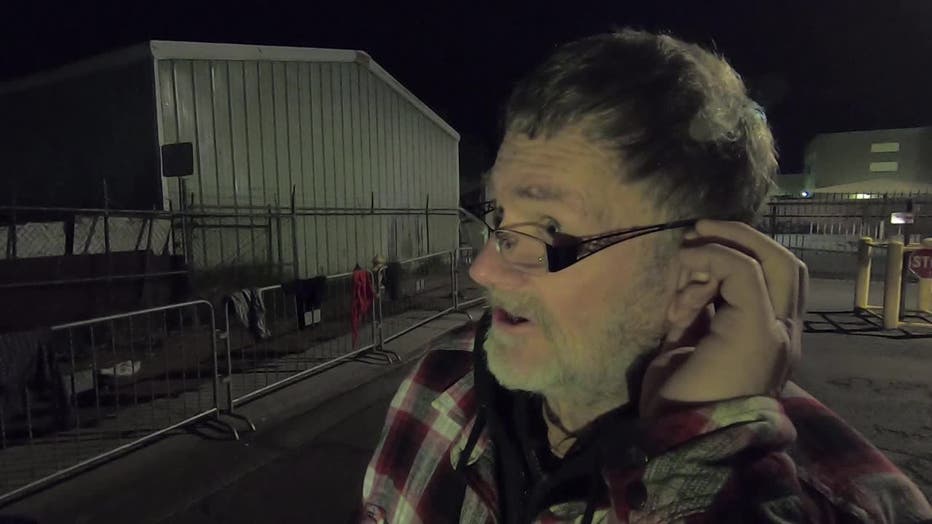 In the hustle and bustle of the city, they are almost invisible, but just a few blocks from Arizona’s shiny capitol dome, you make a left turn into a four, square-block, pocket of misery. A patchwork of tents and tarps, home to some 400 people. It looks like something out of the third world.

“At 69 years of age, it’s kind of tough being on the streets for the first time in your life,” said Glen Mareen.

“I’ve been in Phoenix for two days, but I’ve been on the streets for three months.”

Mareen was an accountant years ago and worked on a ranch. Now he survives on social security. He’s one of the many seniors out here.

“They won’t give me a bed, so I end up sleeping on the ground,” he said.

Some offer their name, while others don’t.

“How long have you been out on the street?” FOX 10’s John Hook asked.

“This is my third night,” the person replied.

“I got released from prison in October,” the person replied.

By Choice or No Choice 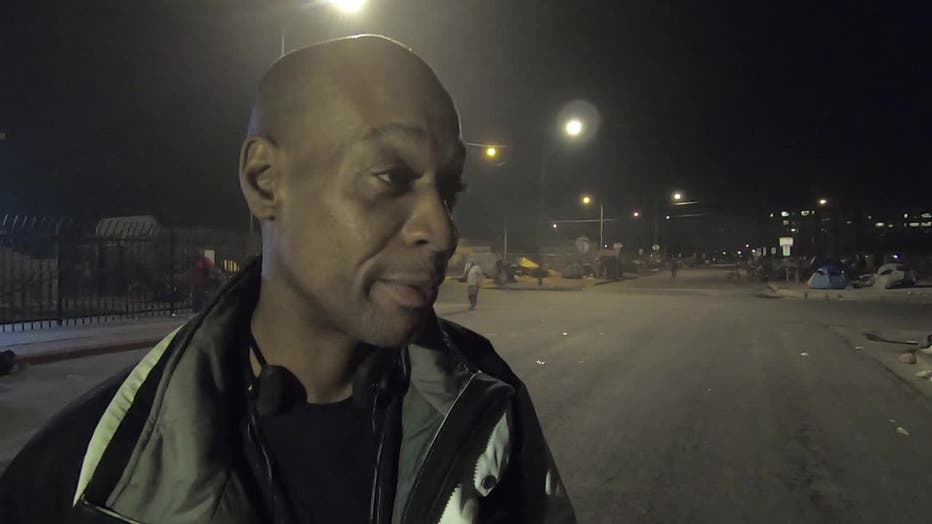 Some are out of options, others are here by choice.

“The majority of the people out here choose to be out here?” one man said.

“Do they work?” Hook asked.

“No, most of them don’t. They’ll just go around panhandling,” the man replied.

“How much drugs?” Hook asked.

“Oh, there’s a lot of drugs out here,” the man replied.

“Do you think that’s part of the reason?” Hook asked.

“Yeah, it’s a good part of the reason,” the man replied.

George Mashatt took a bus from Detroit to Phoenix to stay with family. Once here, they refused him because he has warrants.

“They were scared that they would be harboring a fugitive, which I am not,” he said.

“Is it dangerous out here?” Hook asked.

“George, does this look like America to you?” Hook asked.

“No, this surprised me right here. This shocked me,” Mashatt answered.

Mashatt never expected to see this in Phoenix.

“What I saw here, when I got off the Greyhound bus, this is not it,’ Mashatt answered.

Just down the street, Hook met a woman named Maria, who is from Mexico.

“How long have you been living out here?” asked Hook.

“For about a year and a half,” she said.

“My ex-husband sold everything and cheated, and he threw me out,” said Maria. “It is really bad. All the homeless are like criminals and violent.”

Then, there were two women from California.

“How long have you been out in the street?” asked Hook.

“Is it different than L.A.?” Hook asked.

“To me, I feel like it’s worse because I ended up getting on drugs out here. I feel at home I wouldn’t have gotten on drugs,” the other woman replied.

Hook then asked about the drugs, to which the woman replied:

Adapting to the Environment 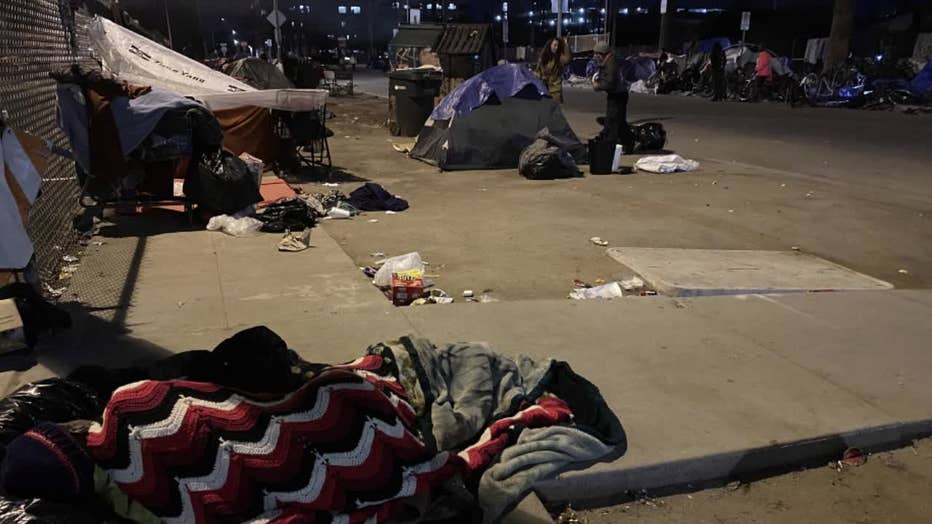 One thing that strikes you: some of the tents are very nice. For many, who’ve spent years out here, it’s proof that humans can adapt to anything.

“Are you comfortable in here?” asked Hook.

“Yeah and my bed is in there,” one woman replied. She has been out in the streets for five years.

The woman says her addict husband spent all of their money on drugs.

“Did you ever think you’d end up here?” Hook asked.

“No,” the woman replied. “There’s a lot of people out here just like me. Average people who are looking for a break.”

She says she’s troubled by the growing number of young people here.

“They say I choose to be homeless and I ask them. I say so your life has just started and you just give up.”

“Why do they give up?” Hook asked.

“I think here it’s a little bit glorified,” said the woman. “The homeless here are spoiled when it comes to having what they need. As far as the donations that come, your hygiene, your meals are all provided here.”

Blast from the Past 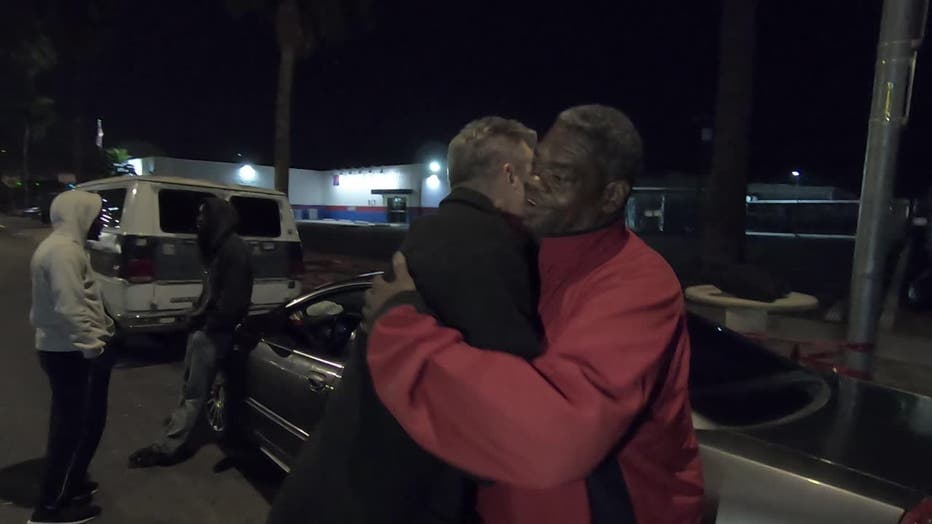 You can’t help but wonder, could it be you? Could it be any one of us?

That point was driven home when Hook came across Gary Goodman.

“Yeah, I’m getting myself together,” Goodman replied.

Goodman and Hook once worked together at FOX 10.

“The meth got me into trouble,” Goodman said. “A majority of the people down here are on meth.”

“Do you feel safe down here?” asked Hook.

“I do because they look out for each other because they’ve got their own laws, standards and stuff like that,” said Goodman.

Goodman estimates half of the people want to be here.

“They’re making good money down here and I think they’re just so used to this lifestyle. I don’t want to say they don’t want the responsibility, it seems safe and comfortable. You get used to it,” said Goodman.

Currently, the shelter has 470 beds, and an overflow shelter was closed several years ago after the Fire Marshal deemed it unsafe.

In all, there are not enough shelter beds for the number of people living out on the streets.

As the area continues to deal with a homeless problem, residents are business owners say they've had it.

"We have to get these people off the streets for their own health and safety because there could be a fire, a disease, anything could happen, and help the businesses so the businesses can function down here," said Joel Coplin.

Coplin owns an art gallery and moved into the neighborhood two years ago. His group is demanding the city open an overflow shelter to get the homeless off the street.

“To get a temporary place for these people to be until we can figure out a long-term solution, which will include everything from drug counseling to mental health counseling to all the things that are at the CASS Center right now,” said Coplin.

Bill Morlan owns an electrical supply company in the area. His business has been in the area since the 1970s, but Morlan has never seen it this bad.

“I have employees who have worked for me for 30 years, and customers who have been with me for more than three decades who are nervous coming down here in a way they never were before,” said Morlan.

Morlan, however, is a compassionate man.

Dirk Foster knows this lifestyle well. He once lived it.

“I was homeless for 13 months until just a couple of months ago,” said Foster. “She gave me a job and a place to live, and I would do work for her in exchange for rent.”

The Citizens' Group is has petitioned the City of Phoenix to do the following:

· Conduct an environmental and safety assessment.