37-year-old Christopher Pelkey was rushed to the hospital Saturday afternoon and shortly after, he died, says the police department. It stemmed from an apparent road rage incident and 50-year-old Gabriel Paul Horcasitas was arrested.

CHANDLER, Ariz. - A Chandler shooting victim was rushed to the hospital Saturday afternoon after an apparent road rage incident and soon after, he died from his injuries, says the police department.

The shooting happened in the roadway of Gilbert and Germann roads, says Sgt. Jason McClimans on Nov. 13.

The man who was shot died. He's identified as 37-year-old Christopher Pelkey. His family says he was a veteran of the U.S. Army.

"We are treating this as a homicide and we are interviewing the suspect," Sgt. McClimans said.

The suspect is identified as 50-year-old Gabriel Paul Horcasitas.

37-year-old Christopher Pelkey was rushed to the hospital Saturday afternoon and shortly after, he died, says the police department. It stemmed from an apparent road rage incident and 50-year-old Gabriel Paul Horcasitas was arrested.

"The investigation determined an altercation occurred while Horcasitas and Pelkey were driving northbound on Gilbert Road. Upon stopping for the red light at Germann Road, Pelkey exited the driver's seat of his vehicle and walked back towards Horcasitas' vehicle, which was stopped directly behind Pelkey's vehicle," McClimans said.

Horcasitas honked his horn at Pelkey, Pelkey got out of his truck, he threw his hands in the air, then Horcasitas opened fire, police further explained.

Horcasitas fired his gun several times, striking Pelkey. Pelkey was not armed with a gun or another kind of weapon.

"One of these rounds from Horcasitas' firearm also struck a nearby vehicle occupied by a family of three," McClimans said.

Horcasitas will be booked into the Maricopa County Jail on suspicion of first-degree murder, drive-by shooting and endangerment. 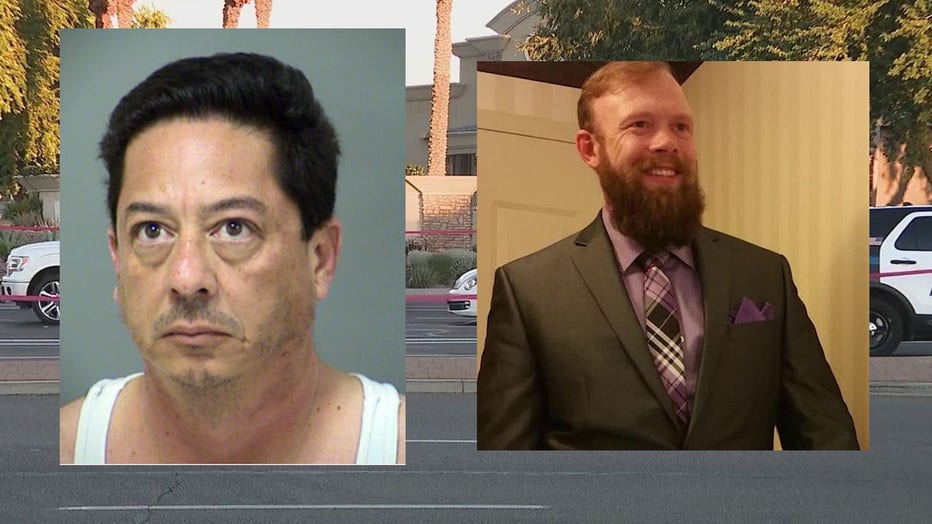 The family whose car was struck spoke about the near-deadly incident.

"I came very close to losing my family today," Matthew Joneschild said. He, his wife and their two sons were on their way to see a movie when their car was hit by a stray bullet.

"He slammed the car door then he walked back and said, ‘Do you want a piece of me?’ and then all of a sudden I heard pop, pop. Thought they were shooting at each other and realized they were actually missing each other and hitting our car," Kimberly Bakker said.

The bullet, they found, went through the back window, missing one of their boys by inches.

They say they are just thankful to be alive.

"We're just grateful that we're still a family and together," Bakker said.  "I understand the world is hurting right now but we're not going to come together, being mean and with violence, we need to understand to love and to have empathy."

Police want to emphasize that in any type of road rage situation, do not get out of your car and to call the police for help.

Pelkey survived three tours in Iraq and Afghanistan. His family is shocked he would be shot and killed so close to home.

"He was senselessly gunned down," said Stacey Wales, Pelkey's sister. "Shot with intent … in the heart."

His family is still processing their loved one's violent death.

"He was blown up a number of times, shot at all the time. We expected it then, and he survived that," his brother, John Pelkey, said. "Never in a million years would he have thought that he would play church softball and get in an altercation and get shot. That was not how this story was supposed to go."

Family says Horcasitas has left destruction and pain in their lives.

"The decision to respond to words by shooting another person, to take their life, just leaves so much destruction and so much pain. The message is, violence is not the answer, absolutely not," Stacey said.

John added, "We believe in people’s right to carry firearms. We’re not anti-gun, we’re anti-bad decisions, and that’s what this was. Chris, if he had survived this, he would have been the first person to forgive this man."

You can donate to the victim's GoFundMe here.

In Phoenix on Oct. 21, a man was shot in the head during a road rage incident while on the way to work with his baby and girlfriend in the car. A woman was later arrested in connection to the shooting.

A day before that, 40-year-old Adam Scott Delk, reportedly shot at a driver in Glendale.

Members of family that nearly missed shooting struggling with trauma

Meanwhile, a family who literally dodged a bullet during the shooting is still struggling to come to terms with what happened.

The Bakker family's car was hit by a stray bullet from the incident. The bullet went through their back window, and narrowly missed two boys.

"It was very traumatic, and I think I actually did not understand what was happening until after it happened," said Kimberly Bakker of Gilbert.

Kimberly was driving her two sons to the movies on that day. She heard someone yelling, followed by a series of shots.

"All of a sudden, pop pop, and then it continues, pop pop pop," said Kimberly.

Kimberly and hew two children were not hurt. However, Kimberly said in the weeks following the incident, she and her kids over sought help with Chandler Victim Services, which connects victims to counseling and help to cover needed treatment.

"People don't know how their bodies are gonna react to trauma, so being able to get in touch with appropriate individuals to help them work through that and find correct coping skills is what we look to do in cases like this," Chandler Police Victim Service Specialist Lacey Rojas.

Bakker said these services have been influential in their healing. She wants other people to know that those dealing with any kind of trauma, be it from a shooting, accident, domestic violence or any other kind of incident, it is OK to seek help.

"I think as a society, we're very good at pushing things under the rug 'cause we don't want to appear weak, but sometimes in order to be strong, we have to show our vulnerability," said Bakker.