PHOENIX - Flood warnings and severe thunderstorm warnings were issued across the Phoenix metro area and in other parts of central Arizona on Aug. 18, as another monsoon storm system swept through the state, bringing hail and winds of up to 60 miles per hour in some areas.

Globe residents clean up after devastating floods that hit the area

In Globe, residents were assessing damages and taking part in cleanup efforts on Aug. 19.

"Water was up to our windows, to where it would’ve busted through the windows if it went any higher," said resident Dedra Spurgeon.

Spurgeon and her family live on Russell Road, where rainfall turned the street into a raging river, with floodwaters spilling into dozens of homes.

"Since the sunken living room took in most of the water, the rest of the water in the house was about ankle deep. The couches are ruined," said Spurgeon.

At a mobile home park along Russell Road, the force of the waters tipped over trailers, and sent cars flowing down the street. Emergency officials say at least 50 homes in the area were damaged of destroyed.

For a time, the US 60 was closed in both directions in Globe as a result of the flash flooding. 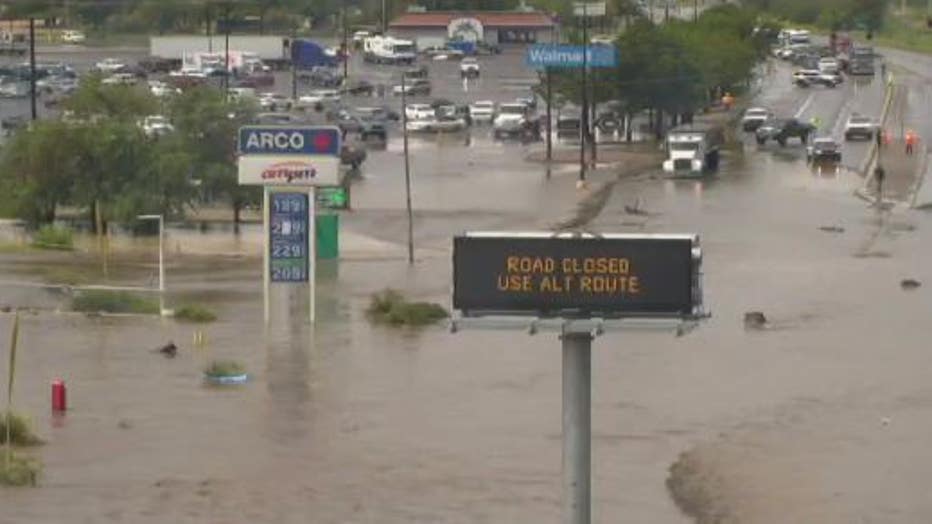 "I've been crying all morning, it was scary," said Joe Stapleton, who owns a pizza place in the area.

Stapleton said Globe residents were not prepared for this type of severe flooding, and many are still on edge, as they wait and see what the rest of the Monsoon season has in store.

"You see a big cloud, and it's like, ‘oh no,’" said Stapleton. "We don’t want to hear anymore flood alerts. Everyone is on pins and needles because every time, someone, somewhere gets damage."

Thunderstorms are expected to continue through the beginning of the week across the state, and with that comes the possibility of flash flooding.

Toward the end of the week, we're expected to see drier and warmer weather.

The storms didn't come without destruction as a North Phoenix church was destroyed, a man's car was struck by lightning in San Tan Valley and a 105-year-old tree toppled to the ground in an Arcadia neighborhood.

In Flagstaff, a man rescued a family from their home after floodwaters broke through and nearly trapping them inside.

Many warnings were issued

We should get a break from the rain today in the Valley with mostly sunny skies and a high near 97°F.

At 8:58 p.m., NWS says a Flood Warning for a dam floodgate release in Maricopa County was issued. The warning was extended until early Thursday morning.

At 6:37 p.m., NWS says strong thunderstorms are expected to continue in Maricopa and Gila counties through 7:15 p.m.

NWS at 6:22 p.m. says Flash Flood Warnings in Globe, Miami and Claypool were extended through 8:45 p.m. Maricopa County's warning is through 9:15 p.m.

At 5:43 p.m., storms were tracked moving northeast with possible wind gusts up to 60 mph, potentially causing damage to homes and trees.

At 5:25 p.m., NWS says there is a Severe Thunderstorm Warning for the Gilbert, Tempe and Guadalupe areas until 6:15 p.m.

By 5:15 p.m., rain began falling over the central Phoenix area again, as well as Goodyear. The Goodyear area received nearly an inch of rain within half an hour.

At 4 p.m. FOX 10's Kristy Siefkin updated us on the latest weather conditions across Arizona.

Safety and transportation officials warn drivers to be mindful of flooded roadways and to not cross them as heavy rain pours across Arizona cities.

By 3:55 p.m., the Greenway Road and I-17 area was left flooded, as it was the last few days after major storms. 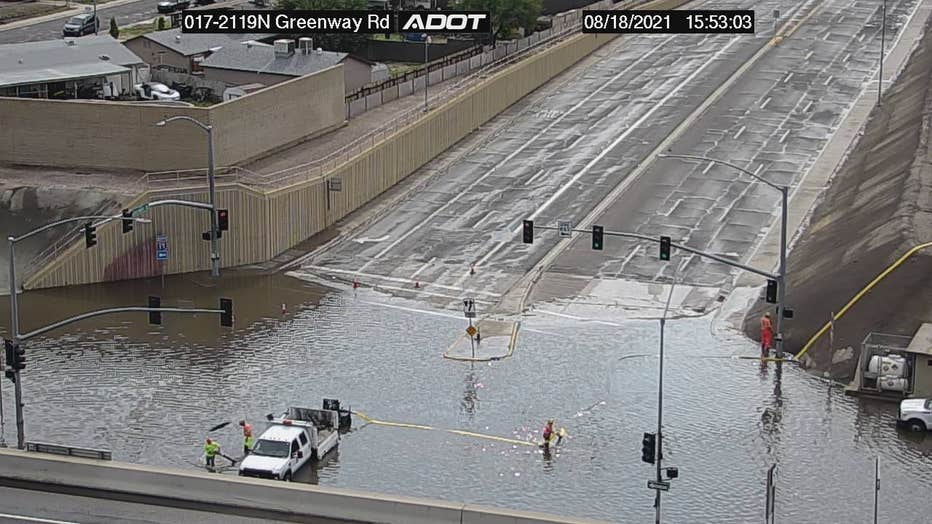 By 2:45 p.m., strong thunderstorms made their way over the central Phoenix area.

As rain continued to fall hard and fast over the Valley, the Flood Control District of Maricopa County warned it takes only six inches of water to sweep a person away and about two feet of water to carry away a car.