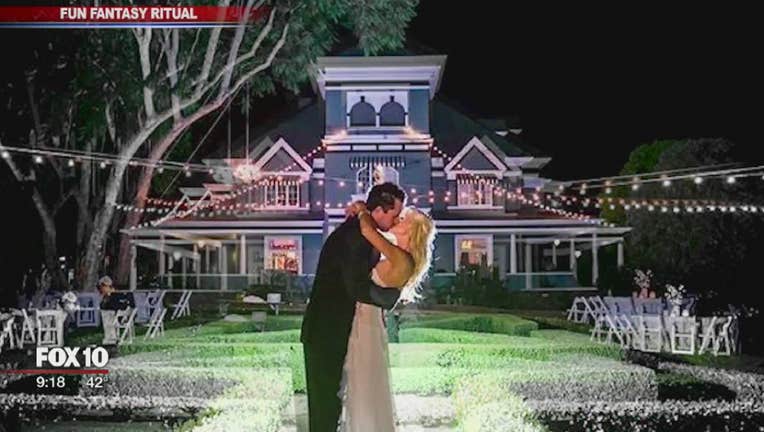 PHOENIX, Ariz. (FOX 10) - In a marriage or dating relationship it's easy to lose the spark. Most of us fall into the day to day tasks and forget about the romance. This was true for one couple until they did something about, and now they're helping other couples one date at a time.

"It was just the same old dinner and a movie every time we would go out so we wanted to spice things up, change things up," said John Stanfield.

Changing things up is exactly what John and Shiloh Stanfield are now committed to. Tonight, one of their monthly dates includes climbing up and flying high on the trapeze here at I-Fly at the Phoenician.

The two have been together for eight years, married four of those years and have two kids. They, like most couples, fell into a dating rut, so they took action and turned to Fun Fantasy Ritual for a little help. The dating concierge service planned this high flying date.

"You kind of get those butterflies again like you did when you were first dating and most times you don't know what you're getting yourself into so it adds excitement back," said Stanfield.

"It's really all about taking the ordinary and making it extraordinary," said Martin Kupper, Co-Founder of Fun Fantasy Ritual.

When founders Martin Kupper and Dana Lam started dating, they put it in writing they would each plan a surprise date once a week. Dates as simple as a camp out-style movie night to as different as goat yoga and an acrobatics class.

It's made a difference in their relationship, so they wanted to pass it on. They now plan dates filled with mystery, surprise and adventure for other couples.

"It's really for couples who have a good relationship already that really just want to take it to the next level and so some of the comments we've had from one couple that had been together 15 years, that she always did the date planning and he never planned the dates so she would always plan things that she liked to do, so now not only does he plan dates, but she also plans things that she knows he'll enjoy, but she still enjoys them," said Dana Lam, Co-Founder. "It just fills up that love bank account for one another."

Kupper and Lam believe if couples set aside time for date night they will be stronger and happier. They're hoping to take away the stress of planning dates, but their main goal is to help couples be the happiest couple they know, one date at a time.

Fun Family Ritual is now in the works. The service will plan family outings so the entire family can get in on the fun.