Officials with the Democratic Party in one southern Arizona county are dealing with controversies surrounding a tweet that promotes a women's march in Tucson on July 7.

NOTE: Due to use of objectionable language in some of the tweets featured, discretion is advised.

PHOENIX - Officials with the Pima County Democratic Party are dealing with fallout stemming from a social media post promoting an event on July 4 that features foul language.

The Twitter post, which was since deleted, advertises a women's march in Tucson. The graphic features the words "f*** the 4th." 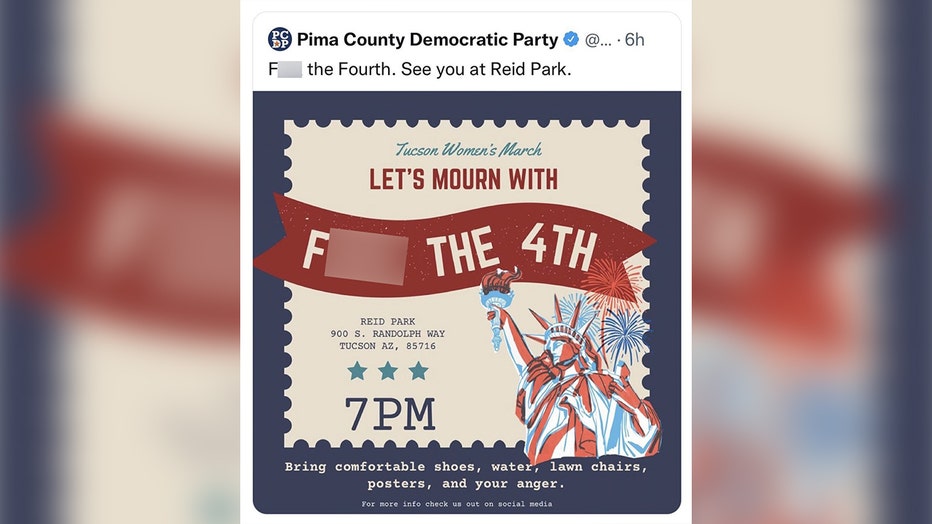 The tweet attracted criticism from the Arizona Republican Party. In a tweet, they called it a "disgraceful rallying cry."

"The Democrats aren't even trying to hide the fact they are the party of radicals anymore," read a portion of the tweet.

Officials with the Arizona Democratic Party have also criticized the post.

"We believe there can be room for both celebration and criticism. That is at the core of American freedom," read a portion of the tweets made by Arizona Democratic Party officials.

Later, via a series of tweets, officials with the Pinal County Democratic Party said in their haste, they used a graphic that was provided by an event organizer.

"That was a mistake, and we will do better," read a portion of the tweets.

Officials with the Pima County Democratic Party, however, did not withdraw their support for the women's march.

"Make no mistake, however. We support the event which will be on July 4 at 7 pm at Reid Park. The event was organized to help women in our community grieve for the loss of their bodily autonomy, which we consider an elemental right," read a portion of the tweets. "Our posting of the graphic upset some people. We urge you to save your outrage for the women in this state who will die of botched abortions. Arizona is not a good place to be a woman right now."