Loved ones and community members extended their support for the Peoria Police Department and Officer Jason Judd's family after he was killed in a crash.

PEORIA, Ariz. - A drive-thru fundraiser is being held to benefit the family of a Peoria Police officer who died after a crash.

According to a post made by the Peoria Police Officers Association, a fundraiser for Officer Jason Judd will take place at a Chick-fil-A location in Peoria, located near the intersection of Bell Road and 83rd Avenue, from 6:30 a.m. to 10:00 p.m. on Monday, July 6. 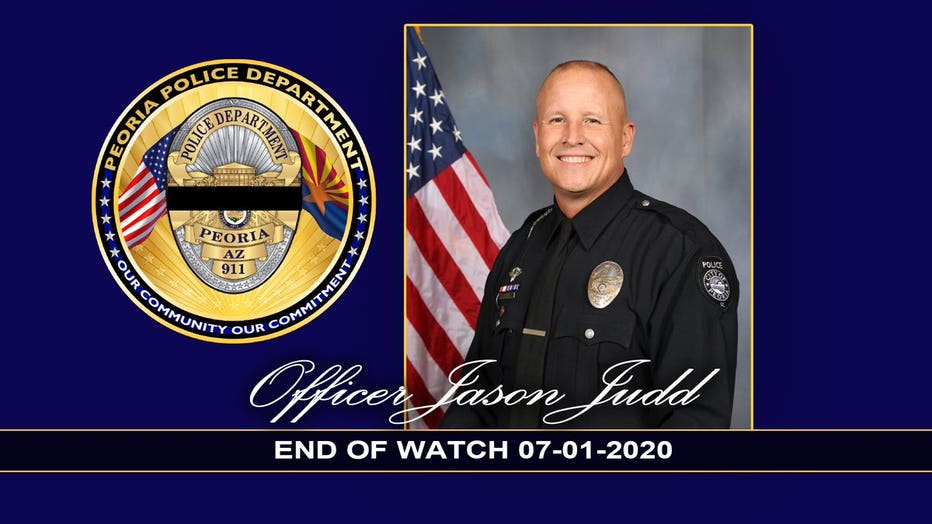 In a statement released by Peoria Police, officials say drive-thru and curbside donations, in the form of cash, check and credit card donations, will be accepted. One-hundred percent of the donations received will benefit Officer Judd's family, and a portion of the food sales at the Chick-fil-A will also be donated to the Survival Assistance fund benefitting Judd's family.

FOX 10 reported on Judd's death of July 1. He died in a motorcycle crash at Liberty High School while hosting a youth camp.

Judd was performing a demonstration for the students at the program, and the children went back into the building after the demonstration. When Judd was leaving, his motorcycle came out from under him. However, the department is unsure of how this happened.

Judd, 52, died after being transported to the hospital. He was with the department for 21 years, and he was a motorcycle officer for 17 years. He was also an Air Force veteran.

Peoria Police officials also say people can make a direct donation to a memorial account set up for Judd.