PHOENIX - Three people were killed and another two were injured in a fiery crash near 60th Avenue and Thomas Road on Saturday night.

Phoenix police said the collision happened at around 10:14 p.m. after a car speeding down Thomas Road rear-ended a pickup truck.

The truck burst into flames during the crash, but by the time firefighters put out the flames, the three unidentified occupants trapped inside had died.

The car that caused the collision had two men inside, officials said. One is in critical condition and the other sustained minor injuries.

"The collision remains an ongoing investigation pending toxicology results for the at-fault driver and further analysis of the collision," officials said.

Ring Doorbell footage from a home across the street shows the exact moment two cars collided.

"In panic … he was trying to rev and get his truck out of the way. It exploded underneath the truck one time, and then the second time, all of the gas just completely shot out of the gas tank with a second explosion and there was a fire all inside of the truck," said Izaiah Barela, who was working just feet away from where the crash happened.

"I was standing right there, and it was literally like a couple feet from where I was because I was in the lobby trying to clean, and it just happened right there. I opened the door and I could feel the heat hit me after the second explosion," he said.

Another employee immediately called 911 and Barela says he ran out to help.

"I grabbed a fire extinguisher and I tried putting out the fire to get to his truck and I could hear him screaming inside the truck. I broke the window and I tried opening the door, but the door was too hot. It was stuck and I couldn’t help him," Barela said.

Of course, it's not easy to witness a tragedy like this one.

"I think about it, because, I don’t know, I’ve never seen anything like that before. It was just a lot to see," he said.

Phoenix Police is reviewing a toxicology report on the at-fault driver.

GoFundMe for the victims' families: https://www.gofundme.com/f/support-the-family-of-adrian-and-efrain-luna 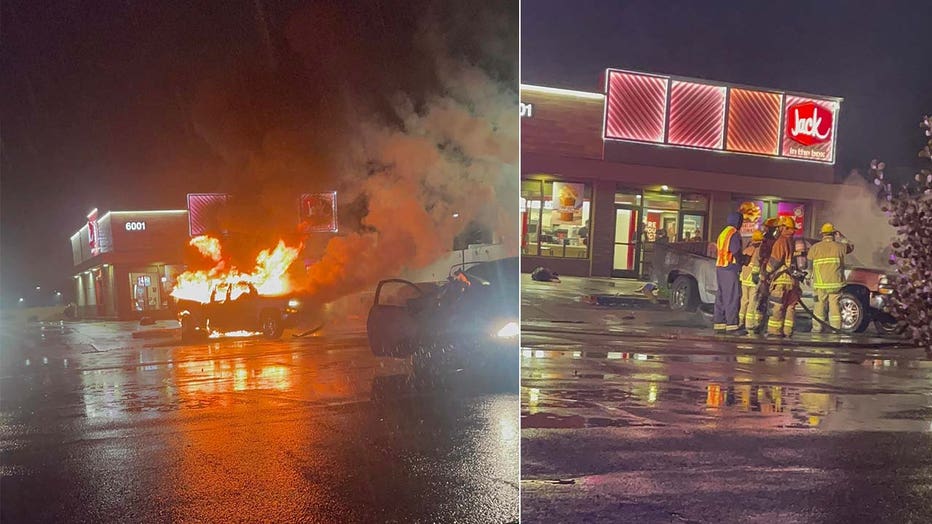