The crash, which involved a Greyhound bus that was headed to Phoenix, happened in the area of Cabazon, which is located about 20 miles west of Palm Springs.

CABAZON, Calif. - At least 12 people were injured following a multi-vehicle collision in Cabazon at around 11 a.m. on Interstate 10 near Malki Road. The area is about 20 miles away from Palm Springs.

According to the California Highway Patrol, a Greyhound bus was heading eastbound in the number two lane when its front tire popped, causing the vehicle to veer to the left. The bus hit a Mitsubishi, then hit the center divider.

Just after 1 p.m., Cal Fire Riverside said there was a total of 12 patients, reducing that number from what they originally reported as 20 patients hospitalized.

"We can confirm there was an incident involving Greyhound schedule number 1418 traveling from Los Angeles to Phoenix. Multiple passengers and our driver were transported to the hospital via ambulance with minor injuries. A relief bus is on the way for remaining passengers. Our primary concern is ensuring we care for our passengers and driver at this time. We are working closely with highway patrol and we have no further comment."

This is a developing story. Stay with FOX 10 News for details. 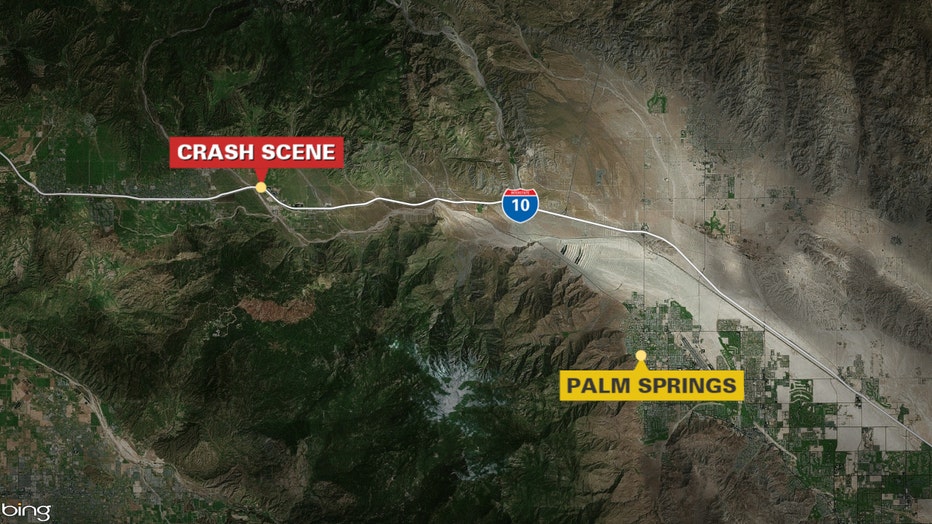 A map showing the scene of a crash involving a Phoenix-bound Greyhound bus in Cabazon, which is located to the west of Palm Springs.