PHOENIX - Halloween is a time to ditch your everyday get up and get into character. One local makeup artist turned her love for art and the holiday into a month's long event.

Professional makeup artist Meagan Emerson spends most of her time beautifying brides for their big day. Her looks are whimsical, modern, soft and pretty, but come October, she's all things spooky and dramatic. She uses her artistic ability to transform herself into dozens of characters. She calls it, 31 days of Halloween.

"It's usually end of August, beginning of September when I start painting so usually by the time October comes I like to have about 15 done so about half of them done and then I usually plan about 10 and then I leave some open for suggestions for if I get recommendations and people are like oh do this and I'm like I love that idea," said Meagan Emerson.

Meagan has been doing this spooktacular challenge for four years now.

"Every year it's really grown and I've tried to push myself to get more into the costume and paint my chest and do the wig or hat," says Meagan. 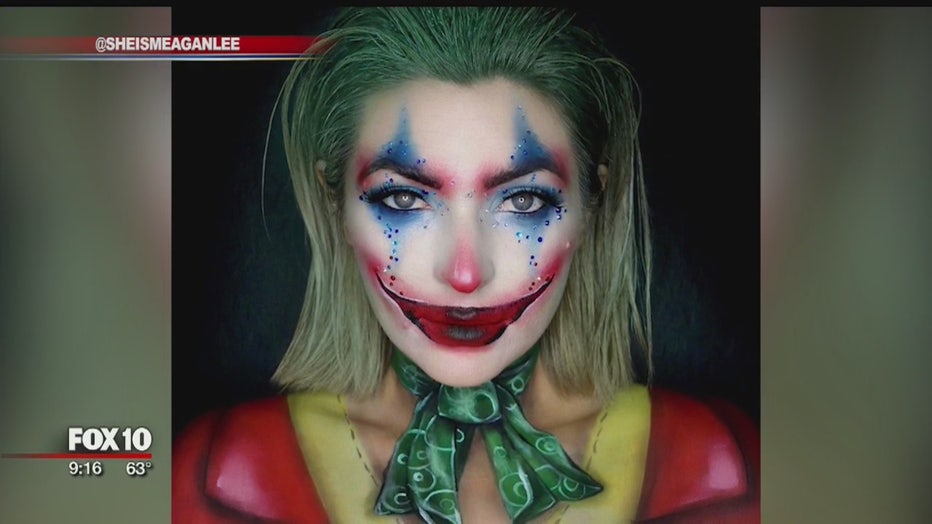 Every day, Meagan posts a new Halloween look on her Instagram page for 31 days leading up to the holiday. This year her looks include Jafar from Aladdin, the clown from It, the joker, her traditional half skull look, Ursula from The Little Mermaid and FOX 10 got to see her work her magic for her Maleficent look.

"Sometimes I'll go off of a movie that's coming out like the Joker came out, Maleficent came out so I'll be doing those looks then also just other artists on Instagram or I'll recreate even my own looks," explained Meagan.

With the prep work, priming, sculpting, contouring and painting it took Meagan about two hours to fully transform. Some days her work takes longer.

"I've had ones that go upwards of six hours and then afterward I'm like get this off of me and then I shower it right off," said Meagan.

Every year her costumes are different.

"I always try to not replicate something exactly and put my own twist on it, so I can do three Jokers, but they're all going to look different," said Meagan.

Because of her elaborate ghostly makeup looks, Meagan has gained quite the following on Instagram. She says most of her clients for Halloween makeup and wedding applications come from the social media platform.

Although Meagan loves helping brides look their best while saying I do, Halloween is her time to get extra creative and tap into her artsy side.

Check out all of Meagan's looks here.