PHOENIX - Cleanup efforts are underway after a massive fire at a Phoenix recycling yard led to the largest firefighter response in the department's history.

About 200 firefighters were deployed to battle the flames on Saturday.

A neighboring lumber company, tire shop and recycling center were among the businesses lost due to the fire, Fire Capt. Todd Keller said.

"In this situation, wind was a major factor," Keller said. "That wind was blowing east and continued to catch each bale, cardboard pallet on fire.

Now, Friedman Recycling is taking over operations as they sort out the damage.

"They are pulling apart scrap buildings that have come down and taking them to the disposal site, and removing structures that have collapsed," according to Keller.

"As you are aware, there was a fire at our Phoenix recycling facility on Saturday. We are very thankful that no one was injured, and the Phoenix Fire Department was quick to respond. Even though our plant is damaged, our service infrastructure remains intact and we are open and servicing every single customer today. The cause of the fire has not yet been determined by the Phoenix Fire Department."

Phoenix fire officials say a sixth alarm fire at a recycling yard near 35th Avenue and Buckeye prompted the largest response in the department's history on June 5.

"I can't remember the last time we had a sixth alarm," said Phoenix Fire Captain Todd Keller. "We've had a couple two, three alarms in the last couple of months, but this is a big one."

The fire was originally a first alarm early Saturday afternoon, but it quickly escalated, maxing out the alarm system and triggering the type of response that would normally only be seen with wildfires.

Residents say that the smoke could be seen from as far as Mesa and Ahwatukee. Meanwhile, fire officials say 150 residential and commercial customers were without power for about 10 hours.

Fire officials say multiple businesses adjacent to the recycling yard were lost, including a recycling center, a lumbar company, and a tire shop. Winds had caused the flames to spread to other buildings and even across the street.

Phoenix Fire officials say 35th Avenue will be closed until further notice from Buckeye to Van Buren. Officials also say over 200 firefighters and 10 different agencies were involved in firefighting efforts. One of the firefighters suffered a leg injury, and is now in the hospital in stable condition.

More than 50 firefighters remained at the scene on Sunday to extinguish any remaining hot spots.

The smoke plume from the fire was so large, it even showed up on National Weather Service radar and could be seen from space.

According to Phoenix Fire officials, the fire started at around 12:30 p.m.

By the time firefighters arrived, Officials say they found multiple pallets of cardboard and paper on fire.

Besides the massive blaze, firefighters also had to deal with 108°F temperatures.

"We have to layer our resources. we keep upgrading assignments so we can recycle our crews. Our firefighters train for situations like this. This is not their first time in the summer," said Cpt. Keller.

Residents were evacuated and returned to their homes on Monday.

"Went out to get the mail and we just pretty much saw, like, a cloud of smoke," said Cindy Ramirez.

"I could see it from miles away out my window, and I’m like ‘I better go check that out,’" said Jason Feder.

Balthazar Barreras remembers watching the flames spread as he looked out of his window Saturday afternoon. He's lived on the same street since the early 1980s and says he keeps hoses accessible in his front yard, worried about the fires that spark at the recycling yard.

"I think this is the sixth fire," Barreras said after being asked if many fires have sparked in his area.

Friedman Recycling has history of fires

Phoenix fire officials say they have responded to several fires at this yard for years.

There is a history of fires at Friedman recycling yards across Arizona and New Mexico.

Crews battled a blaze at the company's Tucson location in 2018, and two fires broke out at a New Mexico site in 2020.

Meanwhile, the Phoenix yard remains open as fire officials plan to turn over the scene to the company.

Friedman Recycling has its own water truck, and its employees will put out remaining hotspots.

What caused the fire to grow out of control

The fire involved compressed cardboard and compressed paper, where the fire can hide inside.

A day after the flames first erupted at the recycling facility, Phoenix Fire Captain Todd Keller explained the way the materials are compacted hid the fire.

"We have a couple front end loaders that are going to go in there, and separate these cardboard bales," Keller said.

One by one. Each bale was torn apart, but the work was especially challenging at the fire' peak because of the building's metal roof.

The roof had collapsed on top of some of the bales, protecting the flames from the water assault above.

"Once these structures fell down on these bales, it made it a little more difficult," Keller explained. "It doesn’t mean we’re not going to put it out, it just means it’s going to take us a little bit longer." 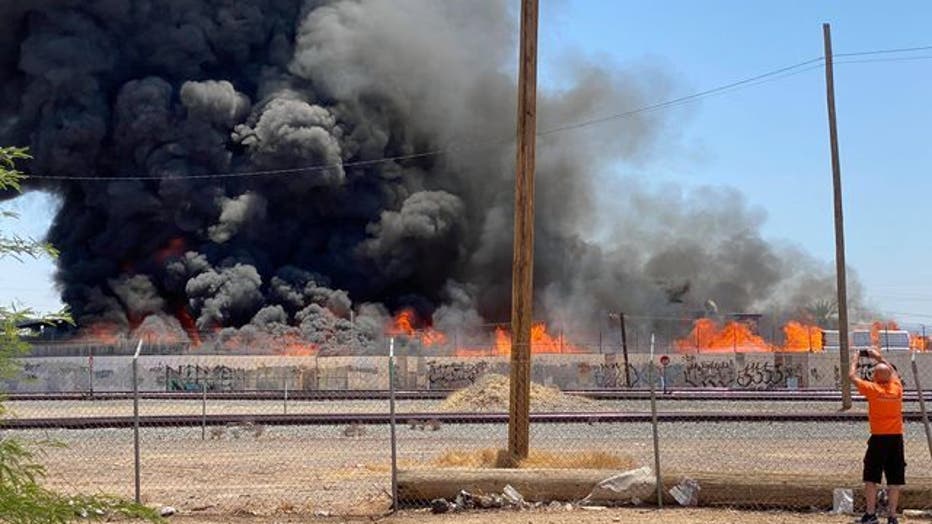 Phoenix Fire officials initially classified the fire as a 1st alarm fire, but it later became a 6th alarm fire.