PHOENIX - A Phoenix man has been arrested after reportedly being involved in a road rage shooting on Interstate 10 near 43rd Avenue back in April.

According to the Arizona Dept. of Public Safety, the victim driver and passenger had been driving down the eastbound lanes of I-10 when they saw a white Kia driving erratically and swerving through multiple lanes of traffic.

The Kia then cut off the victim's car, nearly causing a crash, authorities said.

"The driver of the Kia then slowed down, allowing the victims to catch up to his vehicle," officials said in a statement. "The suspect then fired several shots, striking the victims’ vehicle."

Arizona DPS detectives arrested the suspect driver, 30-year-old Quinten Davis, on July 1 after executing a search warrant on his home.

Authorities say they found loaded assault-style rifles, an Uzi, handguns and ammunition, along with some drugs packaged for sale.

Davis faces charges involving aggravated assault, being involved in a drive-by shooting, and other weapons and drug charges. 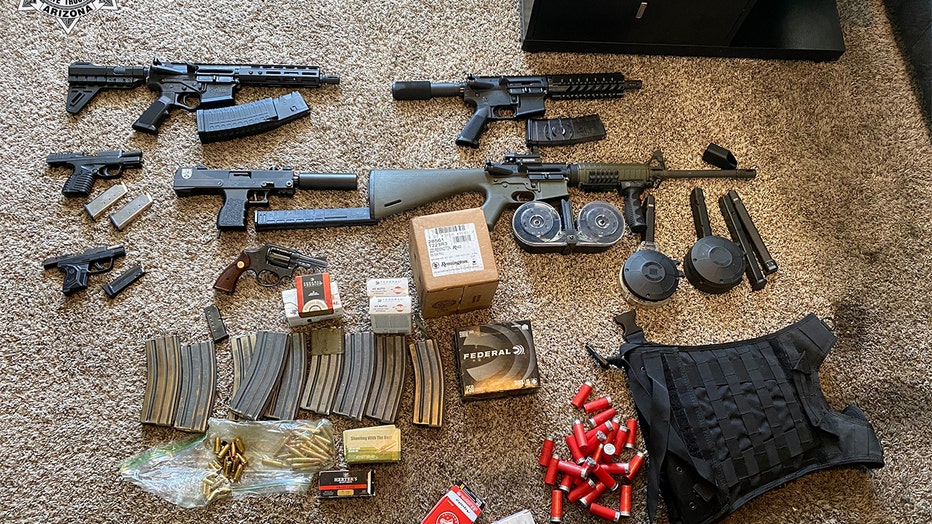 A photo showing all of the weapons found in Davis' home. (Arizona Dept. of Public Safety)