According to police, the suspect entered the backyards of several homes between March and June and stole the vacuums.

TEMPE, Ariz. - Police in Tempe are looking for a man accused of stealing swimming pool vacuums from several backyards in the Valley.

According to police, the suspect entered the backyards of several homes between March and June and stole the vacuums.

So far, 9 vacuums are believed to be stolen.

The suspect is described as a white man in his early-20s, with an average build, brown hair, facial hair, and black clothing. He has a large tattoo on his right forearm.

Jennifer McPhee said she turned her pool on and heard an odd noise. "I happened to hear the pool turn on and it sounded really weird, I looked over, I realized the hose to the vacuum was all piled up on the floor and I just knew that it was gone," she said.

Det. Natalie Barelas with the Tempe Police Department said the thefts are mostly happening in an isolated area.

"It’s really that McClintock southern corridor that it’s happening. It appears the suspect is jumping the fence through the back alley and entering the yards, grabbing onto those pool vacuums, leaving the hoses behind but taking the vacuum," Barelas explained.

The vacuums can resale for $250-$500 each, Barelas said, and thieves can also make money selling the parts.

McPhee said she spent several hundred dollars and a new pool vacuum and it was stolen within months.

"I was mad because we didn’t want to spend the money on this nice pool vacuum but then we did, we were so happy because it makes the pool so clean. Because it was a high-cost item, it was worth jumping the fence and taking," McPhee said.

Barelas says if possible, take the vacuum out of your pool when it's not being used to prevent it from being stolen.

If you have any information, you're asked to call Tempe Police at 480-350-8311. You can also submit a crime tip at www.tempe.gov/police. 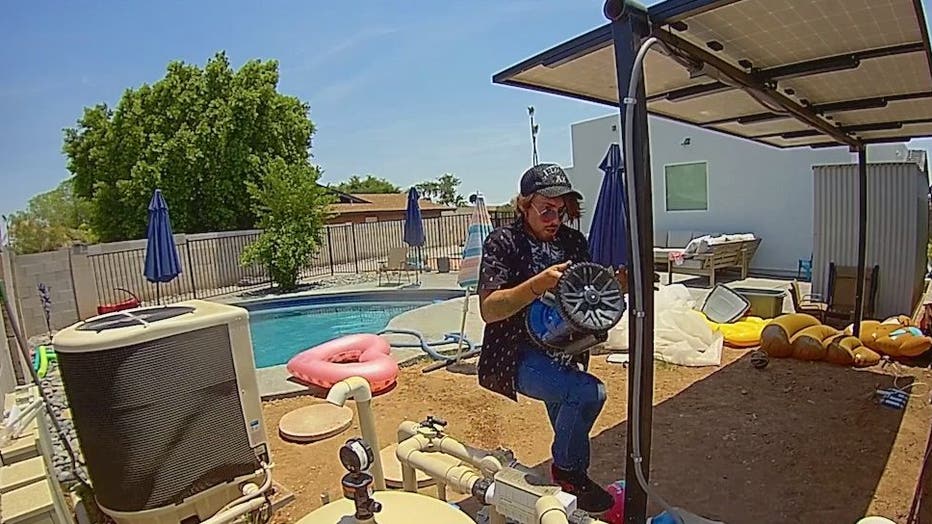 Police in Tempe are looking for a man accused of stealing swimming pool vacuums from several backyards in the Valley.