According to the Phoenix Fire Department, the man used his Life Alert pendant to contact 911 when the fire sparked at the vacant home near First Avenue and Lincoln Street.

PHOENIX - A man and his dogs who live in a trailer on the property of a downtown Phoenix home are safe after a fire burned the house during the early-morning hours of Nov. 2.

According to the Phoenix Fire Department, the man used his Life Alert monitor to contact 911 when the fire sparked at the vacant home near First Avenue and Lincoln Street at around 5:40 a.m.

Once at the scene, firefighters made sure the man and his dogs were safe before attacking the flames. The fire was upgraded to a first-alarm incident as crews worked to prevent it from spreading to nearby homes. 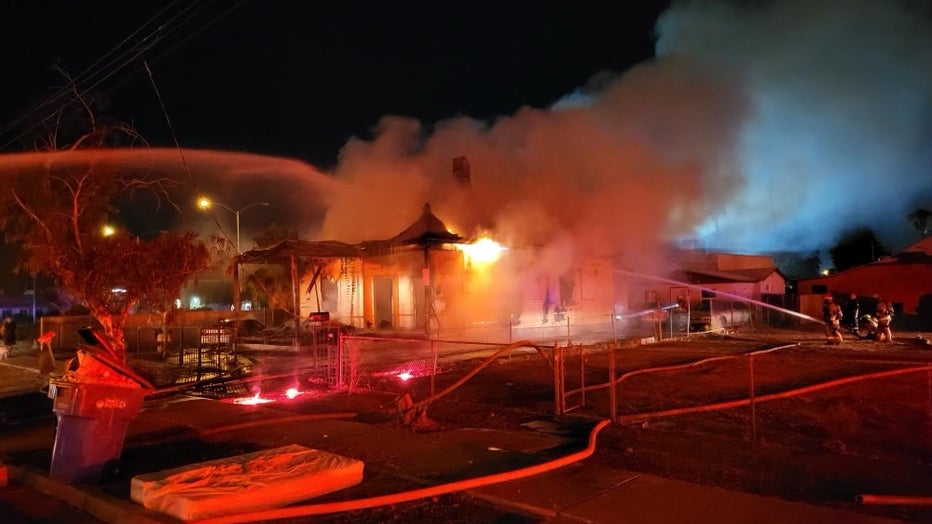 A man and his dog who live in a trailer on the property of a downtown Phoenix home are safe after a fire burned the house on Nov. 2. (Phoenix Fire Department)

"Both were able to get out safely, we were able to evacuate them from their trailer, just get them to a safe distance," said Capt. Evan Gammage. "We also have our crisis units in route, basically to help them with any needs since their electrical and power will be out this morning."

A quick-thinking man who lives on the property jumped into action with the help of a life-saving device.

"I was getting up anyway and I walk out and saw the awning of the house on fire and I just couldn’t even think. I didn’t know whether to get out, so I finally got myself out," said Linwood, a resident who lives in a trailer on the property.

He was wearing a Life Alert monitor. He pushed the button and called for help.

"I just couldn’t believe it and my next thought was, 'Am I gonna get out of here … I have animals and they didn’t want to leave and finally I got everything out. I’m just so sorry that this happened," he said.

Linwood, along with his pups Mercedes and Hush Puppy, were able to escape unharmed. The house, which was unoccupied, is a total loss.

His trailer has some damage, but he says looking on the bright side, things could have been much worse.

"I’m grateful for the good Lord to be with me and help me out, I sure am," Linwood said.