PHOENIX - 'Tis the season to grab the family and cruise around neighborhoods to check out holiday light displays across the Valley.

Big or small, Phoenix residents celebrate the festive season with plenty of options aside from your typical Christmas lights, like inflatables, projectors or even syncing up music with the display. Others, like Lee Sepanek, take it to another level and hand out hot chocolate and treats.

Every week, FOX 10 will be featuring decked-out houses and their Christmas-loving owners throughout the season, and we've aggregated a list of those below.

It's a holiday tradition Steve Hoffman started in his neighborhood years ago. That snowballed into anything bigger than he thought possible.

A dazzling light display stretches several city blocks, each home dressed up with thousands of lights, inflatable, and luminarias. All of the lights sync together with music, and it all runs from Hoffman's computer. He starts everything in September.

Hoffman says they get well over 100,000 visitors each year.

The Lewis Family is in its fourth year of going all-out for Christmas lights. They try to make it bigger and better every year, and it took two weeks to set up their display. It features over 40,000 lights, over two dozen inflatables and it's all synced up to holiday music. There's also a projector in the window that shows Santa or yule logs burning.

Visitors can check out their house every night from 6 p.m. to 11 p.m. until January 1. Every Saturday until Christmas, Santa will be there to greet children, and they also offer hot cocoa.

What started as a toy train more than 40 years ago has turned into so much more for Polimene family. Frank Polimene decided to turn the unused toy into an elaborate holiday display that now includes an even bigger train with an automated candy cane dispenser and hot cocoa car.

The community has found a way to show their appreciation that has now turned into a way to give back every year.

"They started leaving money in the candy cane car, they left money up by the front door, we found money in the caboose car, so we decided to give that money to charity," said Frank. "This year we have a new charity set up, it's the Miracle League of Arizona. They're a group that works with children who are disabled."

The display is up until 11:00 p.m. every night from Thanksgiving until New Years Day. It will also be featured on HGTV's "Outrageous Holiday Houses" on Thanksgiving night.

Jessica and Frances Brown get together with friends during the summer and plan out their display before it's set up end of September. The couple loves Halloween and Christmas, so why not decorate for both? Their biggest inspiration is from the Nightmare Before Christmas.

They collect toy donations for Sojourner Center, which is an organization that helps families impacted by domestic violence and human trafficking. And the donation box grows each year.

While this is the third year for the Halloween Christmas House, the HOA met with their neighbors about the elaborate display on November 19, but the show will go on nightly until January 3rd.

Every June, Patti Tasker and her husband start to work on their dazzling holiday light display that attracts droves of people. There are over 300,000 lights, 35 light-up zoo animals, 456 cartoon characters, and other unique features for the kids.

"There are three Waldos and six emojis that we hide every Friday for the kids and we change them around so kids can walk it," Tasker said.

The display can be seen from the road, and over the years, it's become a huge attraction. You can either walk it or drive it, but on some nights, be prepared to wait in line because they can get up to 700 cars an hour.

The Tasker House is free of charge, and you can enjoy the display until January 5th from 6 p.m. to 1 a.m. every night.

For 33 years, Lee and Patricia Sepanek have been lighting up their Arcadia neighborhood with an incredible holiday display. Sepanek uses over 250,000 lights, a massive tree, a bubble-machine, decorated window displays and plenty of music.

He also emphasizes that his decorations are non-religious, and he invites anyone and everyone to enjoy his holiday tradition.

In the past, Lee had issues with the city of Phoenix and had to get a permit to give out sweet treats like hot chocolate and cookies. Donations of just a $1 are always welcome to help pay for electricity costs.

Their house is open every night from Thanksgiving to January 1 from 6 p.m. to 10 p.m.

We'll be updating our list of top Christmas light displays as we feature more homes on our broadcast. If you'd like to get your house or a house of someone you know featured on FOX 10, email Fox10HolidayLights@foxtv.com. 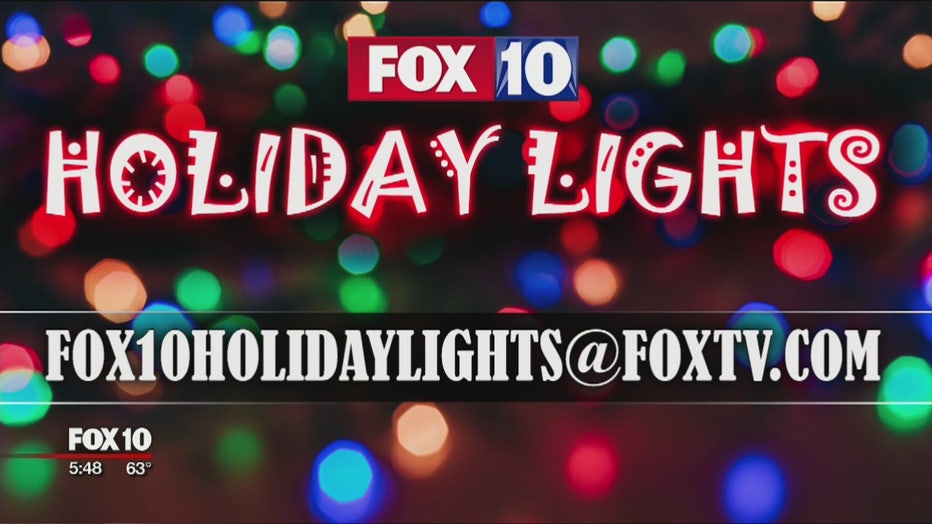