HOUSTON - Coronavirus hospitalizations and caseloads hit new highs in over a half-dozen states as signs of the virus’ resurgence mounted, with newly confirmed infections nationwide back near their peak level of two months ago.

After trending downward for six weeks, the U.S. caseload has been growing again for over a week, particularly in the South and West. Some 34,700 new cases were reported nationwide Tuesday, according to the count kept by Johns Hopkins University. The number was higher than any other day except April 9 and the record-setting date of April 24, when 36,400 cases were logged.

While new cases have been declining steadily in early U.S. hot spots such as New York and New Jersey, several other states set single-day case records Tuesday, including Arizona, California, Mississippi, Nevada, and Texas. Some of them also broke hospitalization records, as did North Carolina and South Carolina.

“The question of how we’re doing as a nation is: We’re not doing so well. How are we doing as a state? Not doing so well,” said Dr. Jeffrey Smith, the county executive in Santa Clara County, California, home to Silicon Valley. Nearly 5,600 people have died of the virus in California, the most populous state.

Cases are also surging in some other parts of the world. India reported a record daily increase of nearly 16,000 new cases. Mexico, where testing rates have been low, also set a record with more than 6,200 new cases.

But China appears to have tamed a new outbreak in Beijing, once again demonstrating its ability to quickly mobilize its vast resources by testing nearly 2.5 million people in 11 days. 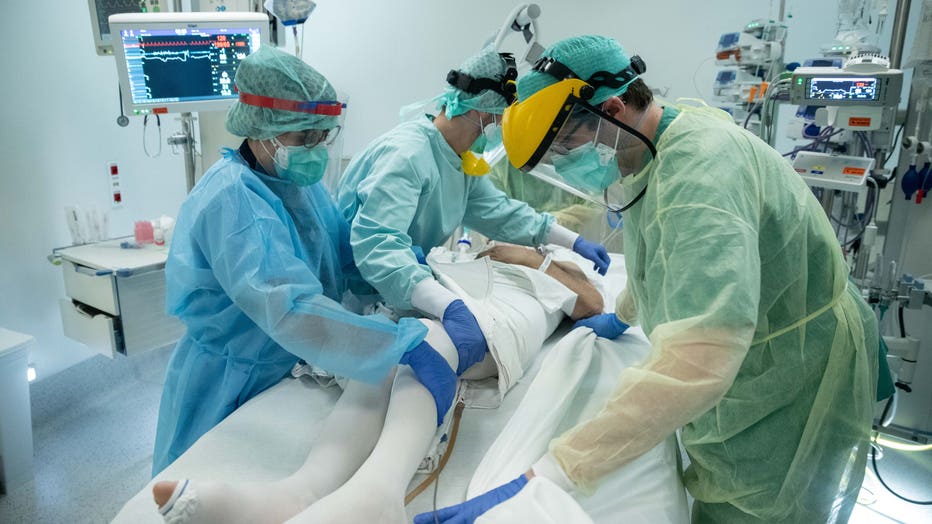 Nurses and doctor tend to a patient inside the negative pressure room during the night shift of April 10 to 11, 2020, in the intensive care unit exclusively for COVID-19 patients at the Ixelles Hospital in Brussels, amid the COVID-19 pandemic, caused

In the U.S., the nation’s top infectious-disease expert, Dr. Anthony Fauci, told Congress that the next few weeks are critical to tamping down the surge and that people should avoid crowds or at least wear masks in them.

Hours later, President Donald Trump rallied hundreds of young conservatives in a megachurch in Arizona as the state reported a record 3,600 new infections.

Ahead of the event, the Democratic mayor of Phoenix, Kate Gallego, made clear that she did not believe the speech could be safely held in her city, and she urged the president to wear a face mask. He did not. Trump has refused to wear a mask in public, turning it into a conservative-vs.-liberal issue.

Phoenix Police officials released additional details surrounding a protest that was later declared an unlawful assembly near a Phoenix megachurch where President Donald Trump made an appearance at an event Tuesday afternoon.

In China, an outbreak that has infected more than 200 people in the capital this month appeared to be waning. China on Wednesday reported 12 cases, down from 22 the day before. Beijing reported seven new cases, down from 13.

Officials in Beijing said they tested more than 2.4 million people between June 12 and June 22. That’s more than 10% of the capital’s population of about 20 million.

Authorities began testing people in and around food markets, then expanded the initiative to restaurant staff and the city’s 100,000 delivery workers. China also said it used data to find people who had been near markets for testing. It did not elaborate.

South Korea, which tamed its first wave of infections, is seeing another rise — this time in the Seoul region, where most South Koreans live. Authorities reported 51 cases Wednesday. The country has reported 40 to 50 new cases a day over the past two weeks.

In India, with a population of more than 1.3 billion, the capital city of New Delhi is a rising concern, with the government criticizing its poor contact tracing and a lack of hospital beds. India has reported more than 450,000 cases of the virus, including more than 14,000 deaths.

Mexico reported nearly 800 new deaths on Wednesday. The country has recorded more than 190,000 cases and over 23,000 deaths, though officials acknowledge both are undercounts because of extremely low testing rates. Mexico has performed about half a million tests, or one for every 250 inhabitants.

In Europe, countries are both easing and increasing restrictions as the outbreaks evolve. Slovenia reintroduced mandatory use of face masks in public transportation and other enclosed public spaces after cases spiked in recent days, while Belgium said theaters and swimming pools could reopen next month. Infections there have nosedived over the past two months.

In Africa, African Centers for Disease Control and Prevention chief John Nkengasong said the outbreak is “picking up speed very quickly,” with a steep increase in cases and deaths as more countries loosen lockdowns. Africa has seen nearly 325,000 cases and over 8,600 deaths.

Worldwide, more than 9.2 million people have been confirmed infected, and close to a half-million have died, by Johns Hopkins’ count.

Across the world, health workers are applauding older individuals who've recovered from the novel coronavirus.

Right now there's one big difference between flu and coronavirus: A vaccine exists to help prevent the flu and it's not too late to get it. It won't protect you from catching the coronavirus, but may put you in a better position to fight it.