The U.S. Fish and Wildlife Service has announced that Sonoran desert tortoises native to Arizona no longer need protection.

TUCSON, Ariz. - Federal officials have concluded that Sonoran desert tortoises native to Arizona have a relatively stable population that doesn’t need protection from environmental threats, but conservation groups say they’re still not convinced that the reptiles’ well-being is a sure thing.

The U.S. Fish and Wildlife Service announced Monday that the tortoise doesn’t warrant protection under the Endangered Species Act because a scientific study "determined that it is not at risk of extinction in the foreseeable future."

While threats such as development and drought "may increase in scope or severity over time, the species and its associated habitat are projected to remain at levels that do not threaten the survival of the Sonoran desert tortoise in the foreseeable future," the agency’s Southwest regional office said in a statement.

The agency’s decision capped a review ordered by a federal judge after conservationists sued to block a previous decision in 2015 against listing the tortoise as a threatened species.

The tortoises are native to the Sonoran Desert that stretches across much of Arizona and in northern Mexico. In Arizona, they’re found in suitable habitat in all Arizona counties except for Apache, Coconino, Greenlee and Navajo, according to the federal agency.

Conservation groups reacted to the latest development by saying they remain concerned that the tortoise’s habitat is being degraded by invasive species, livestock grazing, fire risk, housing development, off-road vehicles and other factors that deplete vegetation, hinder the tortoise’s movement and directly injure the reptiles.

"A decision to forego ESA listing must be based on the best available science, and we will make sure the (Fish and Wildlife) Service complied with that duty here," said Joe Bushyhead, endangered species policy advocate for WildEarth Guardians.

"We worry that the Service has put the tortoise on a collision course with extinction by minimizing the threats from livestock grazing throughout the tortoise’s habitat," said Cyndi Tuell, the Arizona and New Mexico director for Western Watersheds Project.

A representative of the Arizona Cattle Growers Association welcomed the decision.

"We always want the Fish and Wife Service to make decisions based on the facts and science and too often in our view that is not the case. So we are gratified that the evaluation of the information led to this conclusion and we just hope it will be supported by the facts and science and it will be sustainable in court," Jeff Eisenberg, a lobbyist for the livestock group, told the Arizona Daily Star. 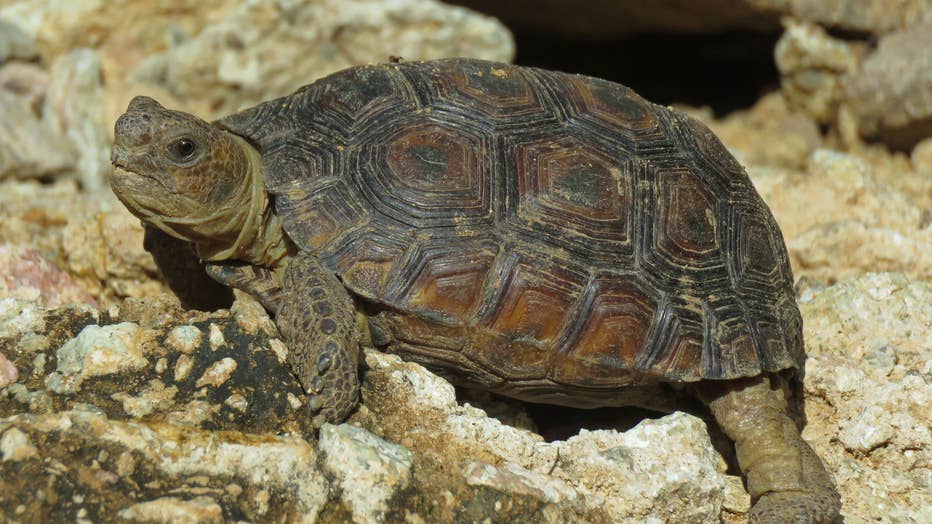 A juvenile Sonoran desert tortoise takes in the sun in the Tucson Mountains. It takes roughly five years for hatchling Sonoran Desert tortoises shells to harden, and they become juveniles, but due to their size they are still quite susceptible to pre