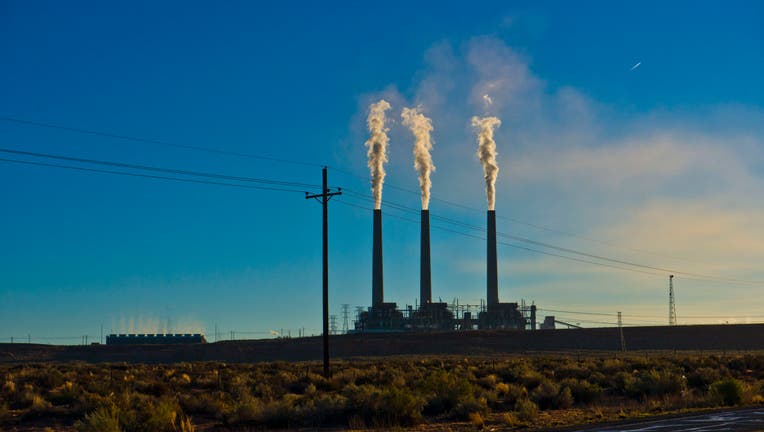 FLAGSTAFF, Ariz. - A massive coal-fired power plant that served customers in the West for nearly 50 years shut down Monday, the latest closure in a shift away from coal and toward renewable energy and cheaper power.

The Navajo Generating Station near the Arizona-Utah line was expected to shutter by the end of the year, but the exact day hadn’t been certain as the plant worked to deplete a stockpile of coal.

PREVIOUS: Coal plant on tribal land to close after powering US West

“It will be hard for people because for employees, there’s a lot of pride, a lot of passion for their work, and they have put their heart and soul in this plant,” operations manager Jeff Rhees said.

The 2,250-megawatt, three-unit plant was one of the largest in the U.S. West and had long been a target of environmentalists, who argued it polluted the air and contributed to health problems. Cheaper prices for power produced by natural gas, rather than environmental regulations, led the owners to decide in 2017 to close it.

Coal was delivered to the power plant by a dedicated, electric railway that snakes 78 miles (126 kilometers) through the high desert in the Navajo Nation. By next fall, the poles and overhead electrical lines that served the railway will be gone. The Navajo Nation has not decided whether to keep the railway and use it for tourism or sell it.

A trio of towering concrete stacks with flashing lights that served as a beacon in the community will be demolished by next fall.

Decommissioning will take up to three years, after which the land is supposed to be returned to the condition it was before the plant was built.

Steve Yazzie, a former power plant employee who now works for a tribal energy company, said biologists from the Navajo Nation and the Salt River Project, which operates the plant, recently met to talk about reseeding the land with plants used for dying wool, making tea and traditional medicines.

Reclamation work also is being done at Peabody Energy’s Kayenta Mine, which pulled coal from land owned by the Navajo and Hopi tribes. It closed months ahead of the power plant because it had no other customers.

Environmentalists will be watching the reclamation efforts closely and pushing the Navajo Nation to develop more renewable energy sources.

“We need to heal from the wrongs of the past by returning to Diné traditional law, and prioritizing energy and water management policies that are in line with our values and virtues as stewards of the natural world,” said Marie Gladue of the Black Mesa Water Coalition.

Offers to work at other Salt River Project sites were given to the more than 430 employees, and about 280 accepted. Others retired or left the company.

The workforce was majority Native American, and the plant provided significant revenue for the Navajo and Hopi tribes.

The power plant’s closure happened without much fanfare. Employees who were given medallions urging them to “finish strong” gathered in August for a farewell party. Each redeployment came with recognition. Some workers bid farewell to each other at smaller gatherings. Nearly everyone took pictures of the power plant and with colleagues.

Rhees said it was important to him to be at the power plant until the end before transferring to the Coronado Power Plant near St. Johns, Arizona.

“I want to be able to shake people’s hands and say thank you for what they’ve done,” he said. “And, tell everybody goodbye.”

Paul Ostapuk, who oversees safety and environment, joked that his goal before leaving the plant for retirement was not to trip on the three flights of stairs that lead to the employee parking lot. He never has in his nearly 35 years at the plant.

“I want to leave safe. It’s OSHA-reportable if you get hurt on that last day,” he said.

Unit 2 of the three generating units was the last to stop operating. Smoke-like plumes that rise from the top of the concrete stacks disappeared. Workers turned their attention to shutting down the boiler, draining water and oil from the lines, shutting off fans and other duties.

The remaining employees’ last day will be Thursday. A small crew will stay on as support for contractors who will work on demolition.

Kerrie Lane, who is Navajo, left earlier this year for another job with the Salt River Project in Phoenix. She resurrected a group for Native American employees who meet for dinner or other social events and help each other navigate a much-bigger city, traffic, school systems and life away from the reservation.

On her last day at the Navajo Generating Station in January, she turned back to look at what she considered her second home and second family and wished it well, a lump forming in her throat.

“When I moved back to Page years ago, I thought I was home. I thought I was done,” Lane said. “My family was here, my parents were here. And to get up and have to come back down (to Phoenix), I wasn’t exactly thrilled, but at the same time, we go where our company takes us. We’ll figure it out as we restart our lives.”