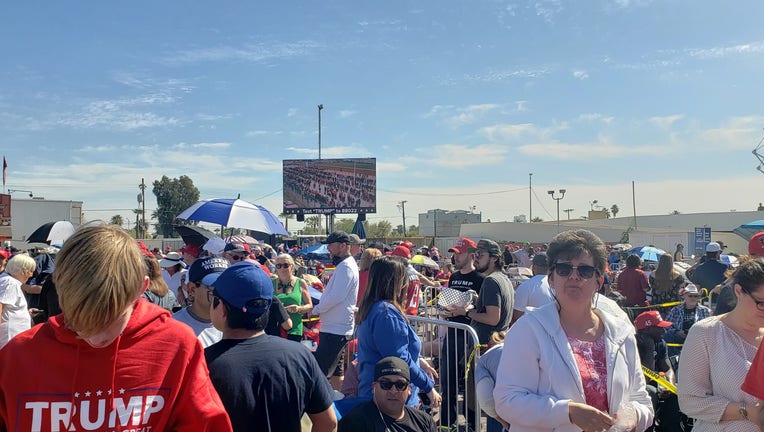 People lined up outside of Veterans Memorial Coliseum ahead of President Trump's rally. (Photo by Sydney)

PHOENIX (AP) — Supporters of President Trump were lining up Wednesday outside the Veterans Memorial Coliseum in Phoenix hours before his scheduled evening rally.

Some people arrived as early as Tuesday for the gathering in the capital of Arizona, which is expected to be a swing state during the 2020 presidential contest. The supporters included people who drove in from neighboring California.

Authorities have said they expect some 20,000 people at the event inside the coliseum, which is located on the Arizona State Fairgrounds near 19th Ave. and Encanto Blvd.

Groups like the local migrant rights group Puente and Arizona Jews for Justice have announced they will be outside protesting policies of the Republican president, who is seeking a second term.

The Phoenix Police Department was criticized for the way it handled protests that erupted as a downtown Trump rally was breaking up in August 2017. Police defended the response, saying some protesters threw tear gas and other objects at officers on the street.

Letters to the president: Prescott man passes around notebook at Trump rally