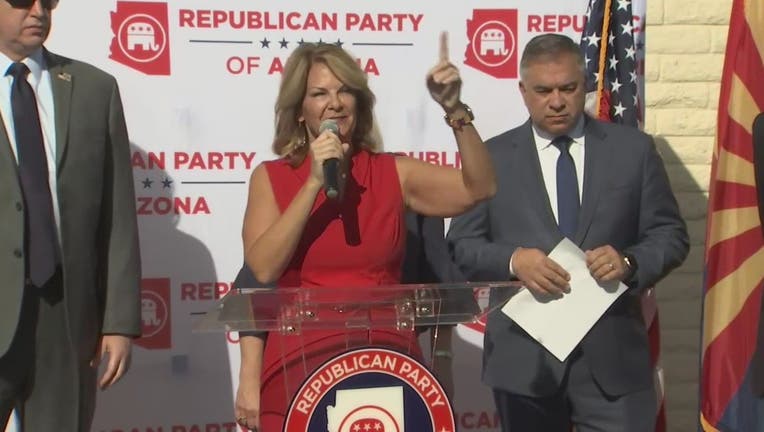 PHOENIX - Arizona GOP chief Kelli Ward has asked the U.S. Supreme Court to hear an appeal in her bid to overturn Democratic President-elect Joe Biden’s victory in the state, challenging the “safe harbor” deadline for completing election litigation six days before the Electoral College vote and asking for more ballots in metro Phoenix to be inspected.

Ward petitioned the nation’s highest court on Dec. 11 after the Arizona Supreme Court had rejected her appeal and concluded Ward hadn’t presented any evidence of misconduct in her challenge of ballots in Maricopa County.

She argued that the Dec. 8 safe harbor deadline is unconstitutional and that her due process rights were violated when the Maricopa County judge who decided her lawsuit allowed two days of information-sharing over ballots due to the deadline. It’s unclear how many ballots Ward wants to be inspected.

Ward is challenging ballots that had been duplicated because voters’ earlier ballots were damaged or couldn’t be tabulated.

Her lawsuit says some suburbs on the southeastern edge of metro Phoenix had an unusually high number of duplicated ballots — and that election results in that area were “strongly inconsistent” with voter registration and historical voting data.

The lawsuit also alleged the software used in processing such ballots would “prefill” Biden’s name on ballots more often than it did Trump.

Her lawsuit led to a court-ordered inspection of 1,626 duplicated ballots that found Trump lost seven votes due to errors in ballot processing in Maricopa County, which has 61 percent of Arizona’s voters.

Trump could have lost 103 to 153 votes if the error rate were extrapolated across all 27,800 duplicated ballots in the county. Biden won Arizona by more than 10,000 votes.

The Arizona Supreme Court ruled on Tuesday that the margin between Biden and Trump wasn’t small enough to trigger a recount — even with the votes could have lost due to problems in ballot processing. The justices cited case law that concludes the validity of an election isn’t voided by honest mistakes.

Attorneys defending election officials said it would be an extraordinary move for a court to reverse an election in which more than 3 million Arizonans voted.

No evidence of voter fraud or election fraud has emerged during this election season in Arizona.

The state’s election results were certified on Nov. 30, showing Biden won Arizona. The Electoral College is scheduled to meet Monday.

In all, seven lawsuits challenging the results of the presidential vote in Arizona have been dismissed, including an earlier GOP suit that sought to determine whether voting machines were hacked.

On Wednesday, a federal judge dismissed a lawsuit by conservative lawyer Sidney Powell that sought to decertify election results that gave Biden a victory in Arizona alleged voting equipment in Arizona switched votes from Trump to Biden.

The judge concluded no evidence of fraud had been presented and that those who filed the lawsuit lacked legal standing and waited too long to bring their case.

Those who believe Trump’s unproven claims of fraud and support his effort to undermine the will of voters say Ducey betrayed his party. His defenders have dismissed the critics as “nuts.”

A reply to an AZ GOP tweet says "I am willing to give my life for this fight" and some fear it could incite violence. FOX 10's Linda Williams reports.