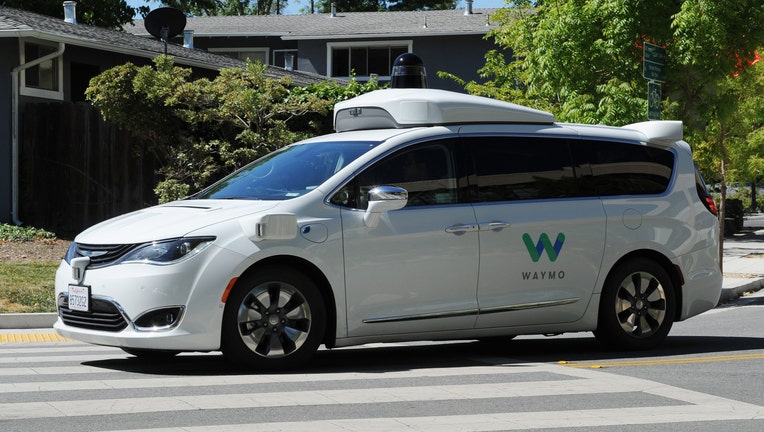 A self-driving car made by Google's sister company Waymo is on the road for a test drive. The car is a rebuilt minivan of the model Chrysler Pacifica by Fiat Chrysler. (File photo by Andrej Sokolow/picture alliance via Getty Images)

PHOENIX - Waymo is allowing the general public to hitch a ride in its driverless autonomous vehicles in Phoenix, expanding a service it had been quietly offering to a select group of riders for the past year.

The service launches to the general public on Oct. 8. The vehicles, which will have no back-up drivers behind the wheel to take over in sticky situations, will serve an area of 50 square miles. There won't be anyone watching remotely who can take over in an emergency and drive the car.

Before the coronavirus struck, which reduced demand for rides, Waymo was providing 1,000 to 2,000 rides in autonomous vehicles per week. Most of the rides had a backup driver behind the wheel, but 5% to 10% of the rides were without a human backup driver and were available only to a smaller group of riders who signed non-disclosure agreements. Waymo did not disclose how many fully autonomous vehicles will be available to the public in the Phoenix area.

“We are worried about our ability to meet demand with the capabilities of the vehicle we have right now,” CEO John Krafcik said in a conference call with reporters.

Waymo, a unit of Google parent Alphabet Inc., is hoping to eventually expand the service into California, but does not yet have concrete expansion plans to announce, Krafcik said.

To help encourage safety during the pandemic, Waymo provides wipes and sanitizing gel in the car and asks riders to confirm in a checklist that they haven’t been exposed to the coronavirus. Waymo requires riders to wear masks and checks that masks are being worn using cameras inside the car. The vehicles also have an air circulation feature that helps remove germs that other riders may have introduced.

For the next several weeks, every Waymo ride in the Phoenix area will be without a backup driver. After that, Waymo will re-introduce human backup drivers behind the wheel in some of the vehicles so the company can work on expanding its service area.

Google spinoff Waymo is trying to educate emergency responders on how to deal with its autonomous vehicles.

A self-driving car service that Google spinoff Waymo plans to launch later this year will include up to 62,000 Chrysler Pacifica Hybrid minivans.

Fully self-driving tractor-trailers will start driving on freeways and will expand to more routes over time.