UPDATE: Katie Hobbs has been projected by the AP to have won this race. Follow our coverage here.

PHOENIX - Democrat Katie Hobbs' lead has shrunk over Republican Kari Lake in the race for Arizona governor, but the battle for control of the crucial battleground state is too early to call.

Lake, a former television news anchor, says she would not have certified the state’s 2020 election results. Her television-ready demeanor, confrontations with journalists and combative message for Democrats made the first-time candidate a rising star on the right whose future in national politics is already being debated.

Hobbs, Arizona’s secretary of state, rose to prominence defending the integrity of President Joe Biden’s victory in Arizona, where he eked out the smallest margin of any state he won two years ago.

The results will be a window into the pulse of the electorate in Arizona, a longtime Republican stronghold that turned toward Democrats during the Trump era. They’ll provide insight into whether Biden’s success here in 2020 was a onetime event or the onset of a long-term shift away from the GOP.

Republicans nominated for statewide offices a slate of Trump-endorsed candidates who have promoted falsehoods about the 2020 election as a centerpiece of their campaigns. All trailed their Democratic rivals in initial election returns, which reflected mail ballots received ahead of the election. Those margins were expected to diminish as more ballots were counted.

Arizona Republican gubernatorial candidate Kari Lake addressed her supporters on the night of Nov. 8, hours after polls close in Arizona for the 2022 elections.

"God did not put us in this fight because it was going to be easy," Lake told supporters at a GOP celebration in Scottsdale. "Not one thing that we've had to go through has been easy."

During her speech, Lake thanked her supporters, and said she will wait before declaring victory.

"We're gonna be patient. We're gonna wait," Lake said. "We will take the victory when it comes, and we will turn this around."

Lake predicted she will make up the gap and overtake Hobbs, reminding her supporters that she was down in early returns from the GOP primary before overtaking her establishment-backed rival as more ballots were counted.

"God did not put us in this fight because it was going to be easy," Lake told supporters at a GOP celebration in Scottsdale. "Not one thing that we’ve had to go through has been easy."

She condemned the printer mishap in Maricopa County, calling it "another stark reminder that we have incompetent people running the show in Arizona" and pledging that her "first line of action is to restore honesty to Arizona elections."

Hobbs has cast the race for governor as a contest between sanity and chaos, branding Lake as "seriously dangerous" and drawing attention to the Republican’s opposition to abortion rights.

Lake's speech came over an hour after her Democratic opponent, Secretary of State Katie Hobbs, addressed her supporters at a post-election event held by the Arizona Democratic Party.

"We've seen the first results come in, and we are feeling good about what we're seeing," said Hobbs, during her speech.

Hobbs also thanked her supporters during her speech and cautioned that results could take some time.

"I have every confidence that the counties administering this election conducted a free and fair election, and their results will be accurate," Hobbs told supporters. "But they will take time, so prepare for a long evening and a few more days of counting."

Mail ballots returned Tuesday or shortly before were not yet reported and will be counted in the coming days.

With razor-thin margins between the parties, it often takes days to know the results of key races in Arizona, and it’s not uncommon for the candidate leading on election night to end up losing when all votes are counted.

Hobbs took a lead over Lake in initial results, which reflected mail ballots returned ahead of election day. Her lead was expected to narrow considerably as ballots cast in person on election day were reported.

Major media organizations have not made projections for Arizona's gubernatorial election.

Both Hobbs and Lake are running to succeed Doug Ducey, who is barred by term limits from seeking another term.

If Lake wins, it will mark her first victory since her foray into electoral politics.

Should Hobbs win the election, she will become the first Democrat to become governor since 2009. That year, Janet Napolitano resigned to become Homeland Security Secretary, and was succeeded as governor by Republican Jan Brewer. Brewer was Secretary of State at the time of Napolitano’s resignation.

Prior to Napolitano’s time as governor, the state had GOP governors from 1991 to 2003. 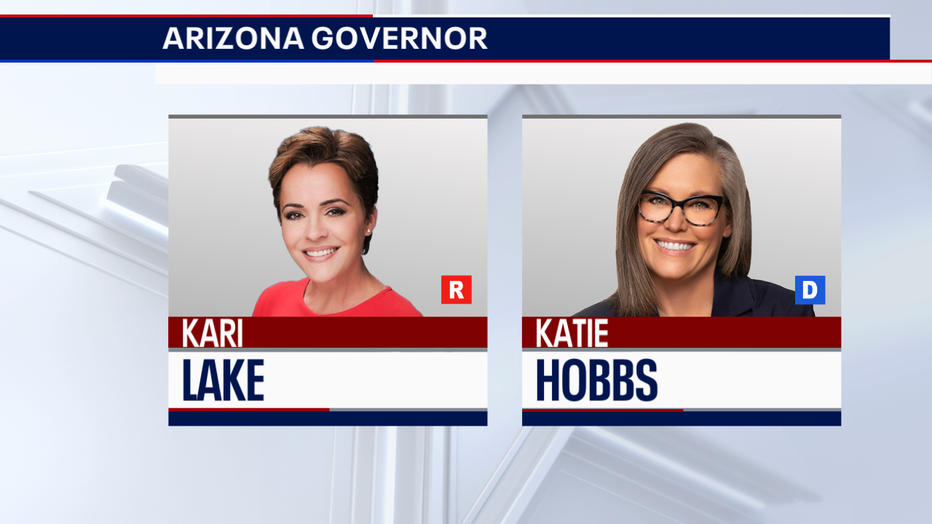 In the run-up to Election Day, the governor’s race was marked by a debacle over a potential gubernatorial debate, with Hobbs saying she will not take part in a debate against Lake.

Hobbs said Lake would turn the forum into a spectacle and embarrass the state.

"What I’m focused on is talking to the voters of Arizona," Hobbs said in October. "I’m not interested in being a part of Kari Lake’s spectacle or shouting match, and I’m going to talk directly to the voters."

Lake, in turn, criticized Hobbs’ refusal to take part in a debate.

The refusal to debate Lake became a liability for Hobbs, producing weeks of negative headlines and alarming some of her supporters.