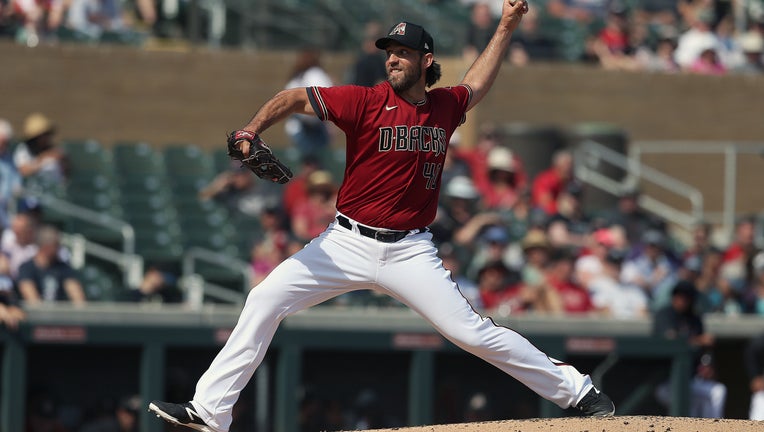 SCOTTSDALE, AZ - FEBRUARY 27: Madison Bumgarner delivers a pitch as he prepares for his spring training debut for the Arizona Diamondbacks on February 27, 2020, at Salt River Fields in Scottsdale, AZ. (Photo by Daniel Gluskoter/Icon Sportswire via Ge

PHOENIX - Arizona’s new pitching addition Madison Bumgarner was having a little fun on the mound during his first summer workout on Saturday, dropping down sidearm and firing a fastball that buzzed catcher Stephen Vogt, who quickly spun out of harm’s way.

Both players were laughing. For a few moments, the carefree vibe of baseball was apparent.

But just like everyone in baseball’s delicate restart, the Diamondbacks are ramping up for a strange season while trying their best to stay healthy. The team previously revealed that three players on the 40-man roster had tested positive for COVID-19. Manager Torey Lovullo said Saturday another player on the 60-man roster tested positive. The team hasn’t released any names of the affected players.

“If you’re not worried about your health, you’re not taking care of yourself like you should and taking precautions like you should,” Bumgarner said. “It’s going to be interesting. I’m just going to worry about what I can control right now.”

Bumgarner — who signed an $85 million, five-deal during the offseason — pitched two innings of live batting practice on Saturday and threw about 40 pitches. He wasn’t particularly sharp, giving up three homers and a few other hard-hit balls.

His first appearance came during the second day of the club’s summer camp at steamy Chase Field, which had the roof closed but the back window panels open despite 108-degree weather in the desert. Lovullo said the big left-hander was still in the process of being cleared on Friday, which is why he didn’t attend the opening workout.

Bumgarner and Lovullo weren’t particularly concerned about the hard-hit balls during the batting practice session, saying it was a normal part of ramping up to prepare for the season.

“I felt pretty good given the circumstances,” Bumgarner said. “I was pretty happy with the takeaways. Obviously, it wasn’t perfect, but it’s not expected to be.”

Said Lovullo: “Admittedly, his stuff was perfect. Wasn’t sharp. But today’s Day One, when you’re just trying to get that dirt on your spikes.”

Lovullo said Friday that he was pleased many of the team’s pitchers were obviously in good shape and had been throwing during the nearly four-month coronavirus hiatus.

Adding the 30-year-old Bumgarner was the biggest of several moves the D-backs made in an effort to close the NL West gap with the Los Angeles Dodgers, who have won seven straight division titles.

The four-time All-Star spent his first 11 seasons with the San Francisco Giants and helped the franchise win three World Series titles in 2010, ’12 and ’14. He was the World Series MVP in 2014. He wasn’t quite as dominant during his last three seasons in San Francisco and struggled with injuries in 2017 and ’18.

Bumgarner caused a bit of a stir during spring training in February when The Athletic reported he had been competing in rodeo events under the alias of Mason Saunders and won $26,560 in a team-roping competition December.

Diamondbacks’ Leake becomes first player to opt out in 2020

Arizona Diamondbacks right-hander Mike Leake has become the first known player to opt out of the 2020 season due to concerns about the coronavirus.