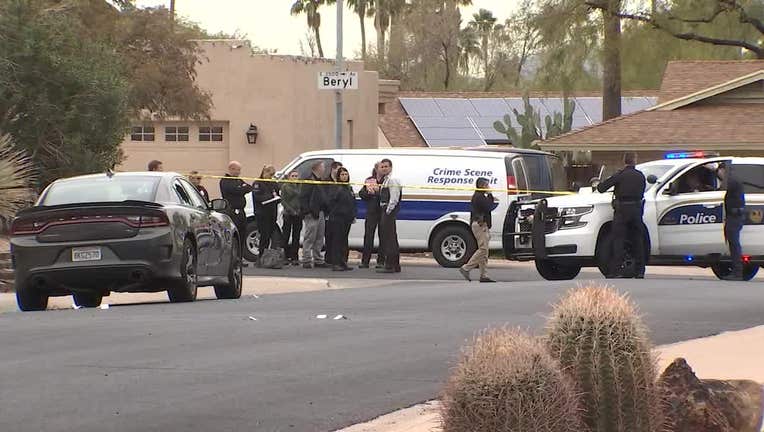 PHOENIX - Phoenix Police officials have identified a man who was found dead inside a car riddled with bullets near 26th Street and Shea in North Phoenix on Thursday.

Police are still looking for a suspect in connection with the shooting death of 21-year-old Luc Treadwell, a local rap artist. Police have yet to reveal why someone fired between 20 and 30 rounds, an excessive amount of bullets aimed at one person.

A surveillance camera captured the sounds of bullets being sprayed around the car Treadwell was in.

"At about 5:00 a.m., I was having coffee. I heard what I thought was a string of firecrackers. The last four were real consecutive, like boom boom boom boom," said Bob Knowles, who lives in the area. "I thought to myself they'd go off that consecutively if that were fireworks."

According to police, an SUV was seen chasing Treadwell's Dodge Charger before the deadly shooting. Treadwell's family lives down the street from where he was killed. His father was too distraught to talk.

"I'm not even ready for a memorial. I'm not ready to make any kind of statement. I'm sorry," said Treadwell's father.

One neighbor, who didn't want to show her face, says she often saw treadwell's car parked in this spot for the past few months.

"I just remember he seemed that he was out of place," said the woman. "He was always shifting and trying to figure out what was happening around him."

On Friday, the quiet and calm has returned to the neighborhood, but shards of glass and bullet holes remained. Police say Treadwell was targeted, but residents are still uneasy, knowing Treadwell's killer is still out there.

"Yeah it's scary you know," said Knowles. "I think a lot more people are running around with guns."