PHOENIX - Arizona Gov. Katie Hobbs pledged in her inaugural address on Jan. 5 to work with her political rivals as she ushers in a period of divided government and Democratic ascendance in a state long dominated by Republicans.

She also called on elected officials to reject conspiracy theories that were promoted by GOP candidates who lost their elections in November.

"Let me say unequivocally to every elected official here today, that if you’re ready to make real progress on the issues that matter most to the people of this state, then my door will always be open," Hobbs said. "Let me also say just as clearly, that chasing conspiracy theories, pushing agendas for special interests, attacking the rights of your fellow Arizonans, or seeking to further undermine our democracy will lead nowhere."

Gov. Hobbs also said she plans to tackle right away the issues of public education, the state's water crisis, and helping Arizonans with rising inflation cost.

"I'm an optimist," said Gov. Hobbs. "I believe now is the perfect time to move pass division and partisanship, and return to the path of cooperation and progress."

Hobbs has been governor since Monday, when power transferred under the state constitution. She repeated the oath of office in public Thursday at the traditional every-four-years inaugural at the state Capitol, where most of the state’s top officials — current and former — gathered.

Former Republican Govs. Doug Ducey, Jan Brewer and Fife Symington sat in the front row, along with U.S. Sen. Kyrsten Sinema, a former Democrat who changed to an independent last month. Cindy McCain, the widow of the late Republican Sen. John McCain, and two of her children, Jack and Jimmy McCain, also had prominent front-row seats, a symbol of their growing estrangement from the modern GOP.

Governor Katie Hobbs and other Arizona leaders were publicly sworn in on Jan. 5 at the state Capitol.

Arizona Gov. Katie Hobbs speaking at her inauguration at the state Capitol on Jan. 5.

Metal detectors are installed at entrances to the area. There was also a heavy law enforcement presence in, out, and on top of the capitol.

"There’s always been armed public safety personnel on the roofs of the House and Senate that look over the ceremony and pay attention. There’s lots of security around the governor and around the stage to look at the crowd and see what’s happening," says Chuck Coughlin.

Hobbs is no stranger to stepped-up security. As Secretary of State, she was assigned personal protection last year after receiving death threats during the Maricopa County election audit.

The inauguration ceremony is privately funded. The list of sponsors includes Arizona Public Supply (APS), although its parent company donated funds to Hobbs’ Republican opponent during the general election. 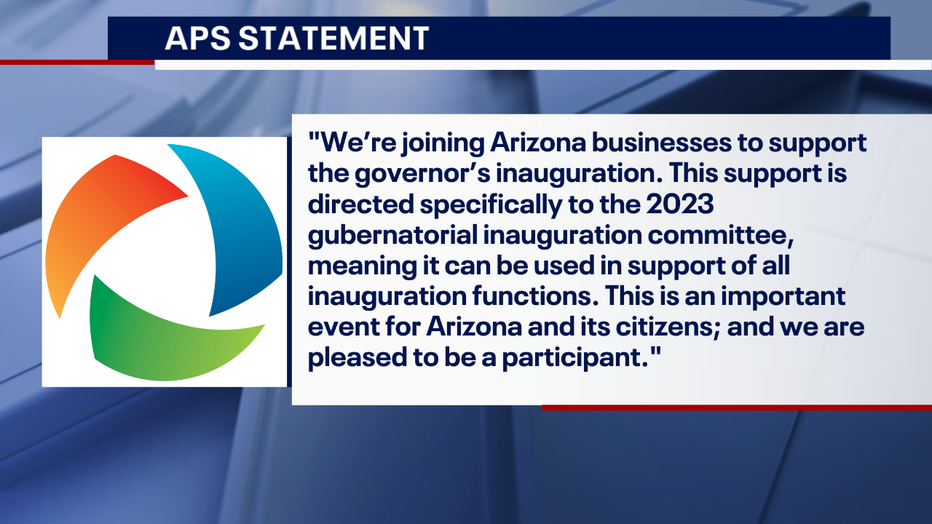 "You’d call that a bad bet. Now they have some fence-mending to do, and they’ll do that by virtue of offering support for this type of event. It’s not an untypical thing that happens in politics when somebody is on the wrong side of the election," Coughlin said.

Hobbs rose to prominence as the secretary of state, staunchly defending the integrity of the 2020 election as former President Donald Trump and his allies tried to overturn the results.

Hobbs assumes control of a state with a strong economy and a solid financial position, with a large budget surplus forecast for the next fiscal year.

But headwinds are on the horizon. Phoenix has some of the nation’s highest inflation levels and housing costs have soared as rapid population growth has outpaced home construction, belying the state’s reputation for affordability. Furthermore, the water supply is constrained by drought.

"We must find common ground and do what’s right," she said. It’s time to invest in public schools, defend abortion rights, safeguard elections and "hold Washington accountable for our broken immigration system and its devastating impact on families and communities."

Hobbs was previously a state legislator who rose through the ranks to become the top Democrat in the Senate. As governor, she’ll have to work with a House and Senate narrowly controlled by Republicans. The GOP caucuses will move to the right after several moderate Republicans in both the House and Senate were defeated in primaries or chose not to run for reelection, getting replaced by a new generation of lawmakers spoiling for a fight not just with Democrats but more moderate members of the GOP.

The new Legislature convenes for the first time next Monday.

In a letter left for Hobbs, Ducey said being governor "is the greatest job in politics and an immense responsibility. I know you will serve the people of Arizona well."

Hobbs’s election is the latest victory for Democrats who steadily expanded their influence in Arizona since 2018, when Kyrsten Sinema was elected to the U.S. Senate. Sinema was then a Democrat but has since become independent after infuriating much of her party’s base.

Democrats now control the top three state offices — governor, secretary of state and attorney general — for the first time in decades, along with both U.S. Senate seats.

Lake has refused to concede and is continuing her legal fight challenging the election results and claiming on social media that elections are rigged. A Maricopa County judge rejected Lake’s claim that the election results were marred by intentional misconduct by election officials in the state’s most populous county.

"You embraced the challenge before us and rejected those who seek to divide," Hobbs said to voters. "Instead, you sent a message that it’s time your elected officials worked together to find real solutions and to build an Arizona for everyone."

The first two weeks in office are frenetic for a new governor just learning the job. Hobbs will give a second major speech just days after her inaugural address when she delivers the state of the state address on Monday, followed by her first budget proposal next Friday. Meanwhile, she has focused on staffing up her government, appointing several new state agency chiefs in recent weeks and announcing she will retain several officials originally hired by Ducey.

"This domestic terrorism is anathema to the constitutional border and must be prosecuted to the fullest extent of the law," Fontes said.

Kris Mayes, a Democrat elected attorney general by just 280 votes, said she "will go to work every single day with the intention of making Arizona a better and safer place to live for all of us."

Hobbs was sworn in during a private ceremony at the state Capitol as she formally took over from Republican Doug Ducey. A public inauguration for the governor and others taking statewide offices is scheduled for Jan. 5.

Katie Hobbs spoke at a victory rally on Nov. 15 a day after the Associated Press projected she will win the governor's race over Republican Kari Lake.