Police say they found one of the suspects because he left his glove behind at one of the incident scenes. The suspect was matched via a DNA analysis of the gloves. FOX 10's Stephanie Bennett reports.

Mesa Police say they have been investigating a series of burglaries dating back to last November where the suspects would use stolen construction equipment to forcibly remove ATMs or safes from Valley businesses.

"[They] used a large tractor, front loader, whatever you want to call them, and basically knocked down a whole side of the building and then removed a safe from there, and then left the stolen front loader there at the scene, and that’s what kind of kicked off the whole case," said Det. Richard Encinas with Mesa Police.

Detectives have been investigating at least three incidents that had similar circumstances, and in one of the robberies, video surveillance from the scene showed a suspect wearing black and white gloves. DNA analyzed from gloves found at one scene matched 41-year-old Patrick Intintoli.

"Detectives were able to get a warrant that showed Intintoli's phone at three crime scenes, two in Mesa and one in Tempe," police said in a news release.

Detectives learned Intintoli had a prior conviction for stealing an ATM with a forklift in 2006.

On May 5, officers were watching Intintoli when they saw him, 57-year-old Mark Bryant and 53-year-old Brian Groce leave a home in Mesa in two separate cars. 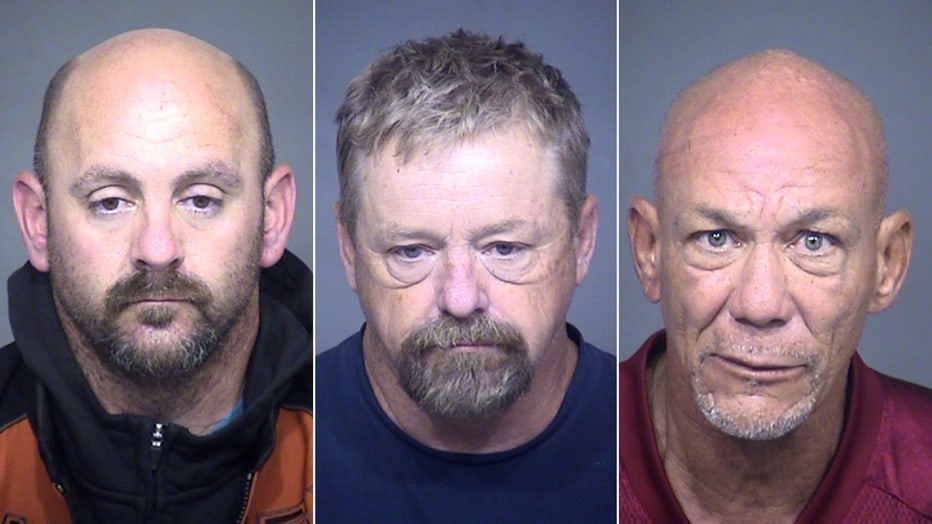 From left: Patrick Intintoli, 41, Brian Groce, 53, and Mark Bryant, 57, were arrested in connection to a series of ATM thefts in the Valley.

"Officers followed where they witnessed the three of them steal a trailer from a parking lot and hook it up to their vehicle," police said.

The men then drove to a construction site where they allegedly stole a Caterpillar tractor.

"All three then drove to a credit union in Pinal County where they used the tractor to remove an ATM from the ground and place it into the stolen trailer," police said.

The stolen tractor was left at the scene and the suspect returned to the same home in Mesa with the stolen trailer and ATM.

Officers say they next saw Groce going to a Home Depot where he bought a saw and high-end cutting blades. When Groce returned to the Mesa home, he was taken into custody, along with Intintoli.

Bryant was located at another home nearby and taken into custody.

Both the stolen trailer and ATM were recovered by police.

The three men were arrested and booked into jail. Police say they are working with other Valley law enforcement agencies to determine if the suspects are tied to similar crimes.