PHOENIX - Phoenix police say two suspects have been arrested after two officers were injured in a shooting after a traffic stop near 27th Avenue and Maryland early Sunday morning.

One officer was shot but is in stable condition and has been released from the hospital as of March 14., and the other suffered minor injuries. "The officer and family thanks everyone for their support," the department tweeted.

The situation began after the pair of officers had tried to pull over a car for several traffic violations at around 1:30 a.m. on March 13. The car fled and escaped from police, but the two officers spotted the same vehicle a short time later and tried to pull it over again.

During the attempted traffic stop on Maryland Avenue, police say a man standing along the road opened fire at police, sending a "barrage of bullets" at the patrol car. One officer was shot in the wrist, and the other officer was hurt by flying glass, officials said.

The driver of the car involved in the original traffic stop reportedly got out of his car to try and run away, but he was eventually taken into custody and was identified as 18-year-old Javon Beasley.

The alleged shooter was identified Monday as 28-year-old Devonte Thornton. With him, they discovered the disassembled gun believe to have been used in the shooting.

Investigators say phone records show Beasley was on a call with Thornton as he drove up to Maryland Avenue and when the attack began. Detectives say the two men live together in an apartment on Maryland Avenue. 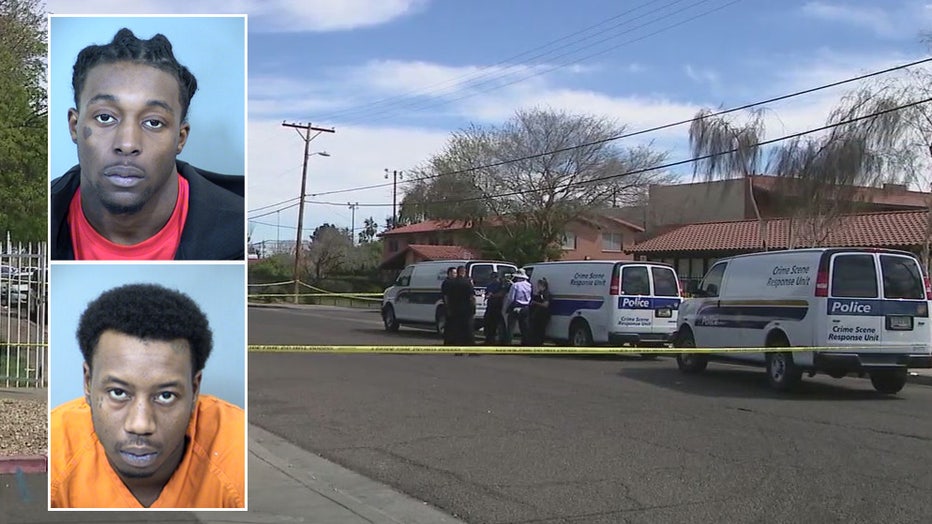 The suspects were identified as (top) Javon Beasley, 18, and Devonte Thornton, 28.

"This is the 7th Phoenix officer shot and 12th injured in the line of duty in the past three months," said Phoenix Police Chief Jeri Williams in a statement. "This kind of violence within our community and toward police officers cannot become the new normal."

Law enforcement veteran says incidents like this are 'tragic'

Andy Anderson is someone who spent 37 years with the Phoenix Police Department. He's a retired assistant chief, and knows how difficult an incident like this is for the entire department.

"This is unprecedented, and it's tragic," he remarked. "I'm sure that it's the negativity toward law enforcement recently that is affecting that."

Police are asking the public to avoid the area between I-17 and 27th Avenue to Glendale Avenue and Bethany Home while the manhunt continues.

'Barrage of bullets': 2 Phoenix officers hurt after being ambushed in shooting, suspects arrested