SCOTTSDALE, Ariz. - In December 2021, the Scottsdale Police Department got a big thank you from a famous comedian and actor who also calls Arizona his home. Now, body cam footage of the encounter has been released.

Scottsdale Police officers say they go on calls every day helping people in these situations, but this one was a surprise because they didn't expect to help someone they had seen on the big screen.

Officers came to Rob Schneider's rescue after his car broke down on Dec. 22.

"It was a nice interaction," said Officer Paul Lee. "These days there is a lot of negativity."

Lee got a call to help with a disabled vehicle in north Scottsdale near Pima Road and Thompson Peak Parkway. Little did he know, he would be helping Rob Schneider – the actor best known for his starring roles in Deuce Bigalow and many other films starring alongside Adam Sandler.

"Officer Lee was hanging there and knew some of my movies, so we were going over some of them, and he said, ‘You will be fine.’" Schneider explained.

The comedian's Tesla broke down and after help from officers, he posted a photo on his Twitter, giving a huge thank you to "Scottsdale's finest" for their help.

"They couldn't have been nicer. Like I said, I love Scottsdale. It is our home," the comedian said.

Lee reflects on the encounter, saying, "He was very appreciative. I would have treated any other disabled car the same way. It just happens to be that was Mr. Schneider." 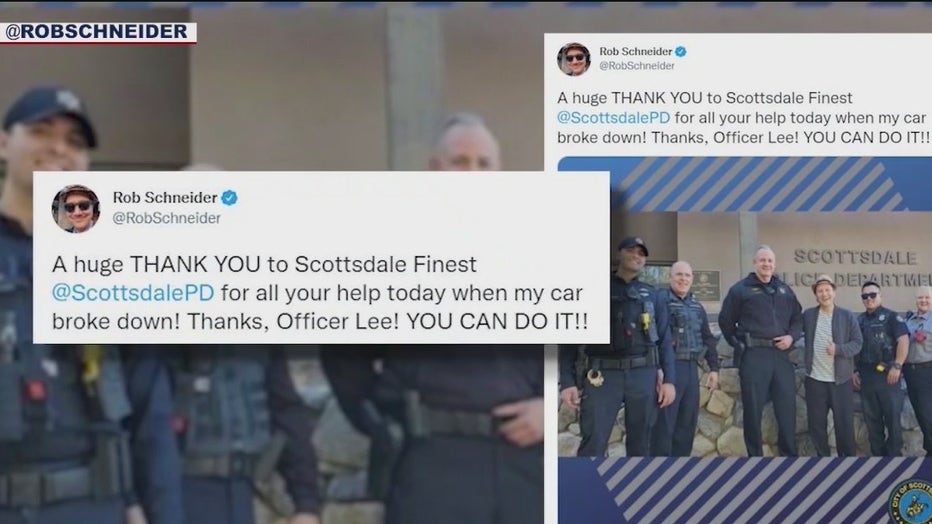 The Scottsdale Police Department is getting a big thank you from comedian and actor, who also calls Arizona his home, Rob Schneider, after his car broke down on the side of the road.