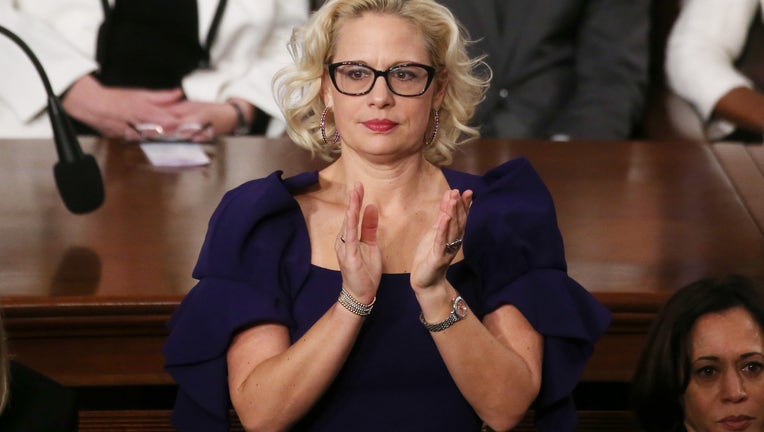 WASHINGTON, DC - FEBRUARY 04: Sen. Krysten Sinema (D-AZ) applauds during the State of the Union address in the chamber of the U.S. House of Representatives on February 04, 2020 in Washington, DC. President Trump delivers his third State of the Union

Sen. Kyrsten Sinema, D-Ariz., earned praise from some right-leaning figures on Tuesday as she stood to applaud the opportunity zones President Trump created under his tax reform bill.

Sinema's ovation stood in stark contrast to the rest of her party who remained seated for much of Trump's State of the Union speech. The speech ended with Democrats' leader – House Speaker Nancy Pelosi, D-Calif. – tearing up a copy of the speech in protest.

Next to her were two former 2020 presidential candidates -- Sens. Kamala Harris, D-Calif., and Kirsten Gillibrand, D-N.Y. -- both of whom have vehemently condemned the president's conduct and agenda.

Sinema has been perceived as a moderate Democrat and hails from a state that will likely be a key battleground for candidates in the 2020 presidential election.

After the president's address, Sinema tweeted a statement urging unity between the two parties.

"There is much more that binds Americans, and Arizonans together, than what pulls us apart. Focusing on our common values instead of our differences is how Senator Cassidy and I introduced the first-of-its-kind bipartisan parental leave bill, and I welcome the president's support for this critical legislation."

During his speech on Tuesday, Trump endorsed that parental leave legislation, which builds off his tax reform package.

Sinema added: "We must continue coming together and work to expand job opportunities, keep our communities safe, ensure veterans get the care they've earned, and make health care more affordable for everyone. As always I'll work with anyone to get things done and deliver for everyday Arizona families."

Sinema's apparent break with her party came as Senate Democrats prepared to vote against acquitting President Trump in the chamber's ongoing impeachment trial. She is one of just a handful of senators who are considered swing votes.