PHOENIX - An Arizona Dept. of Public Safety trooper was injured in a deadly crash north of Wickenburg on April 30, shutting down the US 93 highway in both directions, officials said.

The crash occurred in the northbound lanes of the US 93 near milepost 174, according to DPS. Two people died and five others were injured in the collision.

The US 93 northbound was closed at State Route 71, while the southbound lanes were closed at Interstate 40, transportation officials say. The highway has since reopened.

The situation began when an Arizona trooper was responding to a call about an SUV that was low on fuel, and the people inside believed that they did not have enough gas to make it into Wickenburg.

Officials say he reassured them that they would have enough fuel to get into town and offered to follow them to Wickenburg to make sure they arrived safely.

Once the DPS trooper started following them on the southbound US 93, another car driving northbound was seen allegedly speeding and passing vehicles in a no passing zone. 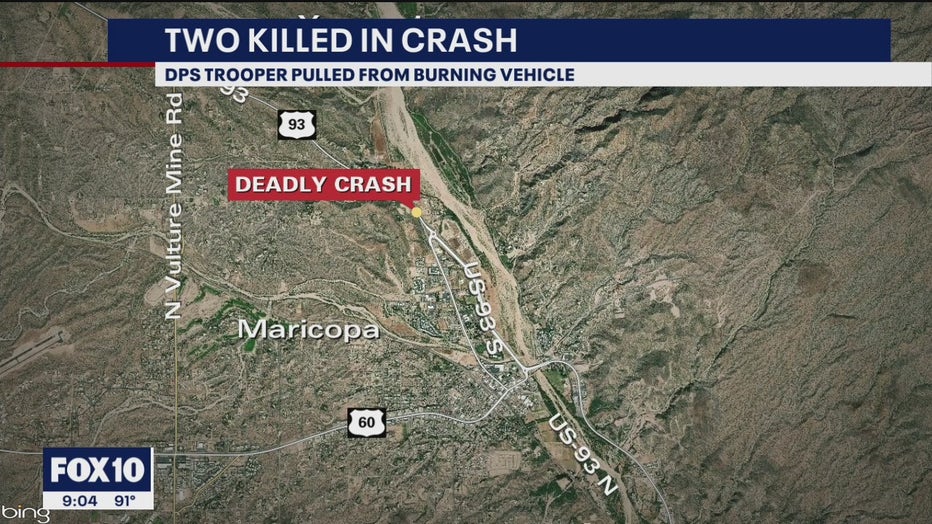 The reportedly speeding car crashed into both the SUV and the trooper's vehicle. The SUV rolled over, killing one person and injuring the other two occupants inside.

DPS officials said the patrol car burst into flames, trapping the trooper inside. He was rescued by people from a fourth car involved in the crash before his vehicle was fully engulfed in fire.

The trooper was flown to a Phoenix-area hospital with serious injuries, but is expected to survive.

One person in the speeding car died at the scene, and two other passengers inside were taken to Valley hospitals with non-life threatening injuries.

On May 3, authorities identified the victims as 23-year-old Alexis Wilson of Chandler and 43-year-old Catherine Winegar of Tucson.

Wilson was the driver who was speeding, authorities say, and Winegar was the victim in the SUV who requested the help of the trooper.

Officer Matt Litman began his cancer battle in March 2021. He was diagnosed with an extremely rare tumor that is normally not found in people his age. On April 30, members of the community gathered to welcome the officer home.

As authorities continue to investigate an incident that led to the death of Chandler Police officer Chris Farrar, members of the community are remembering the officer's life, as well as the legacy he left behind.

Now that a pause on the one-shot COVID-19 vaccine has been lifted, some Arizona counties are waiting for the vaccine to return, so that they can vaccinate more people against a disease that has disrupted the world for over a year.