FOX 10's Anita Roman has the latest on a major crash on I-10 in Gila River involving several semis.

GILA RIVER, Ariz. - The eastbound lanes of Interstate 10 have reopened in Gila River following a crash, according to the Arizona Dept. of Public Safety.

Traffic was detoured at Wild Horse Pass, and officials said the freeway would be closed for five hours to clean up the mess.

The roadway had been backed up from an earlier semi truck fire when the collision happened.

ADOT cameras captured the moments a semi drove into the traffic backup without slowing down in time. The truck swerved and hit two other semis in the left and right lanes.

No one was seriously hurt, but some drivers said they've been stuck on I-10 for hours.

Meanwhile, just north of this incident, a second crash at Chandler Boulevard has shut down the freeway for even longer - at least three people were confirmed dead.

Series of crashes shut down I-10 in Chandler area

A series of crashes shut down Interstate 10 in the Chandler area this morning - including a fiery crash involving semi trucks that left at least one person dead. FOX 10's Anita Roman reports.

Watch: I-10 semi crash in Gila River caught on camera

Traffic cameras show the moments a semi plowed into a traffic backup on I-10, causing the freeway to shut down for hours. 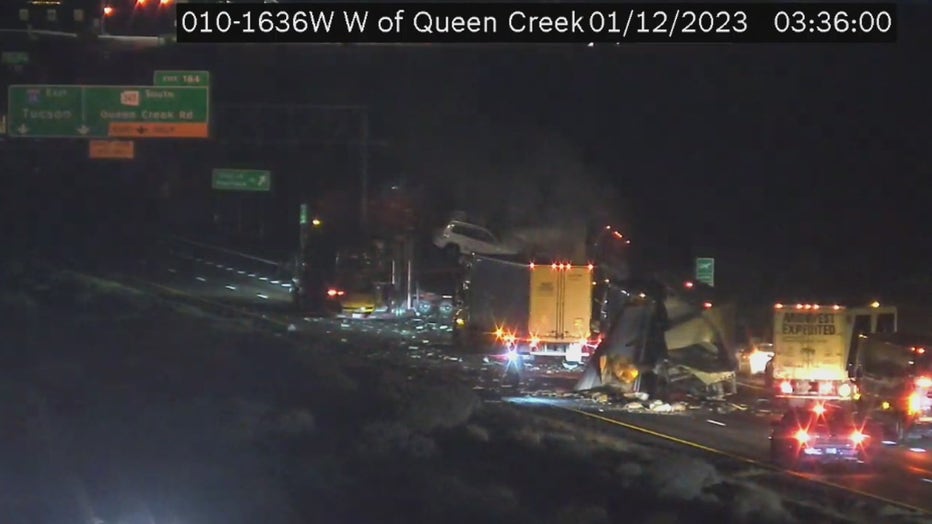