A judge is letting a school district in metro Phoenix keep its requirement that students and teachers wear masks, at least in the coming weeks, even though a new state law bars such mandates.

PHOENIX - A judge is letting a school district in metro Phoenix keep its requirement that students and teachers wear masks, at least in the coming weeks, even though a new state law bars such mandates.

Warner said the new law doesn’t take effect until Sept. 29, rejecting Hester’s claim that the statute took after the Legislature approved it in late June. The law didn’t get the two-thirds approval needed to take effect immediately.

While noting Arizona law gives school boards the authority to protect students, the judge also said the district didn’t cite a legal authority to say that the new law is beyond the Legislature’s power.

Warner noted the law’s effective date is weeks away, saying "many things could change in that time."

It’s unclear whether the ruling will be appealed.

Hester’s attorney, Alexander Kolodin, said his client is evaluating his next steps.

"It’s good to see the court is taking it seriously," Kolodin said. "The court is recognizing the Legislature’s power." 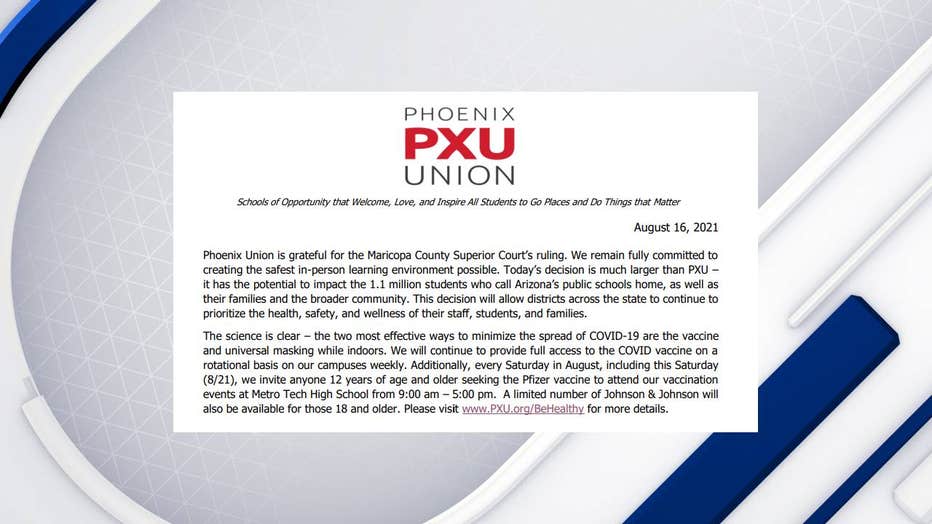 The Phoenix Union High School District released a statement on August 16 after a judge ruled the district can keep its mask mandate in place.

Last week, a coalition of educators, parents and advocates for children filed a broader challenge to several Arizona laws that restrict the power of local governments and school districts to impose COVID-19 requirements.

The coalition also is seeking to overturn a law prohibiting colleges and universities from requiring vaccinations for students and requiring proof of their vaccination status. And it’s challenging a statute that forbids communities from establishing vaccine passports for people to show they were vaccinated.

Hours after Warner ruled, Gov. Doug Ducey warned local governments not to impose vaccine mandates, which are also banned under a not-yet-in-effect law that legislators attempted to apply retroactively. He signed an executive order saying existing state laws ban mandatory vaccination, though the laws he cites apply only to people who comply with "sanitary and quarantine laws, rules and regulations."

Ducey’s executive order also requires local governments to let employees use paid sick time of they’re told to stay home because of an exposure to COVID-19.

Arizona’s COVID-19 case levels are beginning to approach the 2020 summer surge’s daily highs while remaining far below those of the winter.

The state Department of Health Services on Monday reported 2,400 new confirmed cases and no new deaths. That follows three straight days of more than 3,000 new cases.

The new numbers bring the totals in Arizona since the pandemic started to 967,862 cases and 18,464 deaths. Before Friday, Arizona last reported more than 3,000 additional infections in early February.

Hospitalizations in the state related to COVID-19 have nearly tripled since the end of May.

The debate over whether or not to require masks for school students continues, as more school districts implement such a requirement, and a lawsuit has been filed over it. FOX 10's Matt Galka reports.

The issue appears to be whether the state law banning mask mandates in schools is currently in effect. The school district maintained that the law does not apply until the end of September.

"The effective date is Sept. 29th," said Mary O'Grady, attorney for Phoenix Union. "I know you’re not asking for argument, but beyond they are all-in, because they think they’re right on the law, they presented no evidence of harm. No evidence for preliminary injunction."

The state’s prohibition against mask mandates by school districts was included in budget legislation enacted in late June. The legislation doesn’t take effect until Sept. 29, though it included a provision saying the prohibition is retroactive.

"I don’t know what the factual situation will be Sept. 29 when the law takes effect. This is based on what’s going on with the pandemic and, as we all know, those things change quickly," O’Grady said.

It’s not clear whether the state’s prohibition is now in force. A legislator who supports the prohibition has asked government lawyers to say when it takes effect.

Hester’s attorney, Alexander Kolodin, says the date the ban goes into effect doesn’t matter. Kolodin said the real issue is whether the district can defy state statute, especially if the district intends to keep doing it down the road.

"I’m not here to argue about whether masks in schools are good or bad. The Legislature has made that decision. I’m here to enforce the law," said Kolodin.

Phoenix Union, which resumed classes earlier this month, has about 28,000 students and 4,000 employees. Its governing board made the decision to enforce indoor mask-wearing.

Phoenix Elementary approved a mandatory mask rule Monday regardless of the vaccination status of students, staff and visitors. The only exceptions will be for special medical reasons.

"We know that our children learn best in person and we will implement mitigation strategies that help to minimize the spread of illnesses, reduce the need for quarantining, and avoid classroom and school closures," a district statement said.

Three districts in Phoenix did the same earlier in the week.

During a virtual meeting on Aug. 3, the Osborn School District board also approved a mask requirement.

"Moving forward, we will work on how we’re going to communicate this idea of maintaining our currently active mask mandate on our campuses," said Osborn School District Superintendent Dr. Michael Robert.

The issue of mask requirements also came up at the Creighton School District meeting.

"In-person school is what’s best for my child," said one parent, during the meeting's public comment section. "As a 10 year old, he’s unable to be vaccinated. Please do everything in your power to protect him and other children.

Both Osborn and Creighton school districts are made up mostly of elementary schools, where kids are too young to get vaccinated.

"They’re in an untenable position between what the Legislature is trying to mandate them to do, versus what the CDC and other health experts are saying what’s best for student safer. That’s not a position they’re used to being in, where the law runs contrary to student safety," said Kotterman.

In a tweet made on Aug. 2, Arizona Superintendent of Public Instruction Kathy Hoffman said it is "way past time the Governor and Republicans in the Legislature repeal their short-sighted & reckless law that endangers Arizona’s students."