Police officers charged over alleged misconducts while on duty

The decision was announced Wednesday afternoon by the Maricopa County Attorney's Office.

PHOENIX - Officials with the Maricopa County Attorney's Office say they will file criminal charges against a Phoenix Police officer and a Mesa Police officer over misconduct the officers allegedly committed while on-duty.

In a statement released on June 25, the officers were identified as Phoenix Police officer Sean Pena and Mesa Police officer Nathan Chisler. None of the officers are under custody as of Wednesday afternoon, according to officials with the County Attorney's Office.

According to court documents released by officials with the County Attorney's Office, Officer Pena is accused of sexual assault and sexual misconduct.

In the first incident, Officer Pena is accused of sexually assaulting a woman while handcuffed in the back of his patrol vehicle on August 26, 2018, according to court documents. They were stopped at the railroad tracks near 3rd Avenue and Buchanan Street.

The woman told police she was arrested by Officer Pena for an outstanding warrant out of Yavapai County, after she was stopped at a city park after hours.

Officer Pena, according to the documents, denied the allegations and stated that the woman offered to him oral sex if he would release her.

In the second incident on or around June 1, 2019, police say Pena was responding to a welfare check near 27th and Southern Avenues where a woman was wandering around in the area.

She was taken into custody and taken to another location near 11th Avenue and West Lynne Lane.

After she was released from custody, documents show she told police she was sexually abused by Pena.

Court documents say his patrol vehicle was at the dropoff location for about 10 minutes.

Pena also denied these allegations, according to police.

Phoenix Police officials speak out on decision to file charges

On Wednesday evening, Sgt. Tommy Thompson with Phoenix Police released a statement on the decision, which reads:

Pena was placed on administrative leave in November 2019. In February 2020, the investigation conducted by the Phoenix Police Department was submitted to the Maricopa County Attorney’s Office for charging. Today, the Maricopa County Attorney’s Office announced that Pena was indicted based upon the Phoenix Police Department investigation.

A termination or Loudermill hearing has already been scheduled for Pena. Pena has been with the Phoenix Police Department for approximately three years."

According to the documents, the alleged incident involving Officer Chisler took place on December 6, 2019, when he, while working as a uniformed officer, responded to an incident at a sports bar near US-60 and Alma School Road.

Officer Chisler, according to investigators, was one of a number of officers at the scene who dealt with the numerous individuals related to the call. During the investigation, officers tried to detain or arrest a person. The victim, who was not identified, was not compliant.

"The defendant approached the victim and fired one round from his handgun, striking the victim in the lower left leg and buttocks area," read a portion of the documents. 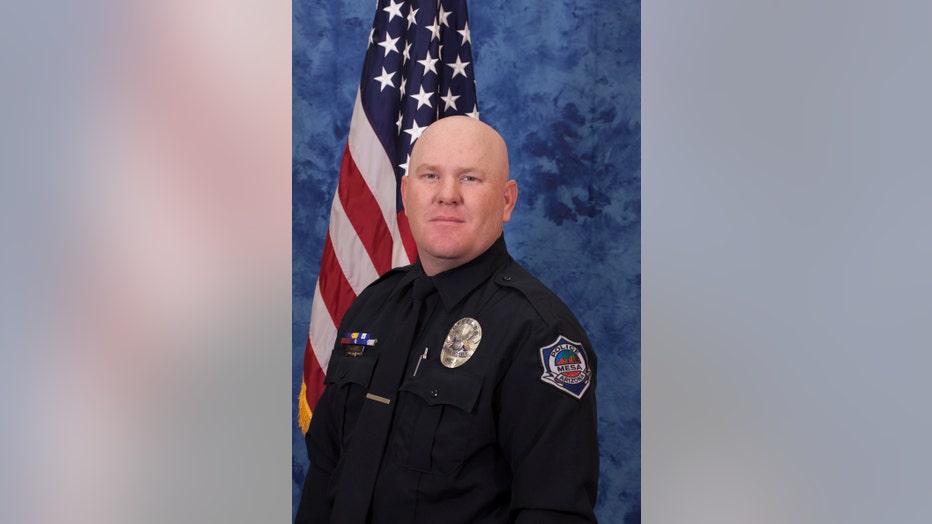 The victim, according to investigators, was not found to be in possession of any weapons, and was later taken to the hospital.

Officer Chisler, according to the documents, is accused of Aggravated Assault.

FOX 10 has obtained a statement from the Mesa Police Association on the incident involving Officer Chisler, which reads:

"Today, Maricopa County Attorney Allister Adel filed criminal charges against a member of the Mesa Police Association. Typically, these cases are first reviewed by a grand jury before charges are filed. We are disappointed Ms. Adel chose to circumvent that process and we vehemently disagree with her decision. We respect due process – one that’s free from political influence – for all people,"