Maricopa County Sheriff's Lt. Chad Brackman was laid to rest on Nov. 20 in Gilbert. He was killed on Nov. 10 after he was hit by a driver while working off-duty traffic control in Scottsdale.

SCOTTSDALE, Ariz. - A lieutenant with the Maricopa County Sheriff's Office died after he was hit by a car on Nov. 10 near a Scottsdale intersection.

According to police, the collision happened just before 11 a.m. at Pima and McDowell roads.

Lieutenant Chad Brackman, 47, had been working traffic control while off-duty at a construction site when he was hit and he died at the hospital from his injuries.

Brackman was a 22-year veteran with MCSO and was serving at the department's lake division.

He leaves behind a wife, two children and two stepchildren.

The driver who hit Brackman was identified as a 69-year-old woman. She was medically evaluated and released from the hospital on the same day.

Police would not confirm if she would be facing any charges for her role in the crash.

"This will take some time to bring to a conclusion," said Scottsdale Police Chief Jeff Walther about the investigation.

Investigators are working to determine if speed and/or impairment were factors in the crash.

Memorial services will be held Saturday, Nov. 20 at 10 a.m. at Red Mountain LDS Institute in Mesa. Following his funeral, a service will be held at Gilbert Memorial Park Cemetery.

Law enforcement officers across the state said a final goodbye to Lt. Brackman on Nov. 20.

Sometimes a salute is more than a gesture. It can be a goodbye.

"That’s the final salute for that officer, knowing that family is not going to be able to see them. Talk to them. Touch them. Sit down and eat with them," Said Enrique Jimenez. "That’s the final moment for the officer to finally go home."

During the livestreamed funeral in Mesa, his wife Melissa said she understands now how committed this community is to each other.

"If I didn’t understand it before, I totally get it," she said. "The spirit I have felt being around other officers and what they’ve felt and given, I get it."

A line of motorcycles arrived at the church before the funeral Saturday, flashing that red and blue. After, his procession brought him to Gilbert Memorial Park to lay him to rest.

"Communities don’t realize what those officers sacrifice everyday they go out that door," said Gilbert resident Denise Bobbitt. "They don’t know what they’re going to encounter each work day."

Melissa said goodbye with a purpose.

"He was the best example of service everything he did was service oriented," she said. "In order to honor my husband for the remainder of my life, I will dedicate it to serving other people."

Penzone says although any loss of life is tragic, it's especially tragic when someone who dedicates their life to public service is killed. He says times like this incident makes it tough to be the head of a law enforcement organization.

Chief Walther remarked on the loss of Brackman, saying, "Today, we stand with Maricopa County Sheriff's Office and Sheriff Pezone."

Penzone goes on to say Brackman was a good, kind and quality man.

"His wife kissed her husband goodbye this morning and expected to see him at the end of his shift," Penzone said. "Although in this line of duty, this profession, we realize risks are consistent with that …"

While recognizing the immense loss of Brackman, Penzone remembered the life of MCSO Deputy Juan Ruiz who died from his injuries on Oct. 11 after being attacked by a suspect he was taking into custody days before.

Funeral services to be held for killed MCSO lieutenant

Funeral services will be held on Nov. 20 for lieutenant Chad Brackman, who was killed last week while directing traffic in Scottsdale.

Bill Phares was visiting his father-in-law at the hospital before the procession took off when he saw dozens of law enforcement vehicles outside the hospital in Scottsdale.

"I decided to walk around and I saw all the police cars and motorcycles lined up and that's why I'm here now, I'm gonna want to pay my respects if I can," Phares said.

He was shocked to hear the news of yet another law enforcement death in his community.

"It's like a brotherhood. They really come together. One of their own gets hurt and I just wanted them to know too that the rest of the community mourns with them," he said. "They put their life on the line for us, and I think once in a while we need to just step back and thank them for that."

A day later, the sheriff's office is focusing on being there for his family.

Sadly, this is the second time Brackman's wife has become widowed.

Melissa Ponder Brackman posted on her personal blog, in part, "My heart is broken in a million pieces. To do this once is tragic, but to do this again is unimaginable."

She lost her previous husband 18 years ago when he was gunned down by a convicted serial killer in South Carolina.

She’s now grieving the sudden and tragic death of her husband, again.

"I think about her previous loss, it was incredibly violent and tragic and criminal and different, in the sense that today’s loss is just as horrific, but her husband absolutely is a hero. He was working to provide safety and security to the community," said Angela Harolle, CEO of the 100 Club of Arizona. "I hope that her children also find comfort in the fact they know there is an entire community that is ready to bear hug them and support them as they go through some of the most challenging times of their lives."

This year hasn't been the easiest for first responders, Harolle said.

"2021 for Arizona has been one of the deadliest years for our first responders, from January 1 to today, we’ve lost a total of 53," Harolle said. "Yes there were a lot of COVID-related deaths, but we also lost four public safety members to suicide."

She adds that each loss is unique for families and they'll be treated as such.

"We want everyone to understand that their loss is unique and appreciated and that we will support them regardless of when it happens or how it happens," Harolle said.

You can donate to the below links in support of Brackman's family.

His MCSO family is devastated at his sudden loss, and at a BBQ fundraiser on Nov. 17, members of the lake patrol shared their memories of their boss.

"I could say I'm honored to say he was my friend and my boss," a co-worker said. He added, "Generous, selfless, extremely hard-working …"

A co-worker said Brackman could have retired after his 22-year long career, but he loved it too much to give it up.

Those he worked closely with are still trying to process the sudden, and tragic loss. 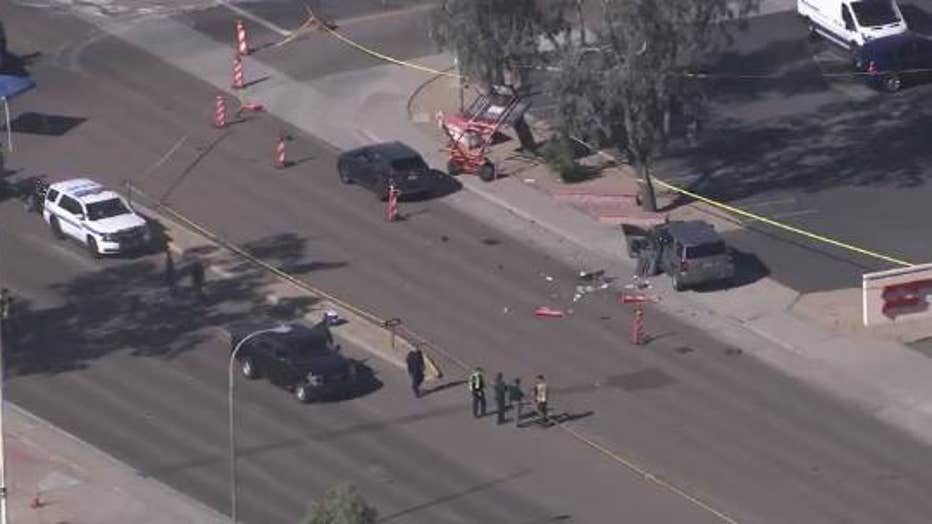 Lieutenant Chad Brackman with the Maricopa County Sheriff's Office was killed on Nov. 10 when he was working traffic control off-duty and a driver hit him. Sheriff Paul Penzone says he was a good, kind and quality man.

Pedestrian hit by car in Scottsdale

Video from SkyFOX revealed that an unmarked police SUV appeared to have been involved in the collision.