The governor and mayor are at odds over what should re-open and tempers are flaring. FOX 10's Jennifer Martinez reports.

PHOENIX - Phoenix city parks are packed for the Easter holiday weekend, but the parking lots and barbecue grills are off limits.

It's part of a political battle between the mayor and the governor over COVID-19 restrictions -- and it's leading to a lot of confusion and frustration.

"We didn't realize it was closed."

Barricades blocked the entrance at parks across the city to limit large gatherings.

"It's not fair for some kids because it's Easter and they should be out here. This is the only place that we can hide eggs. When you live in an apartment, it's hard, you know. You can't just hide eggs inside the house."

Governor Doug Ducey is slamming Phoenix Mayor Kate Gallego, saying it violates his executive order and is demanding the city to open up the lots. This is after he made admission to state parks free for the weekend. 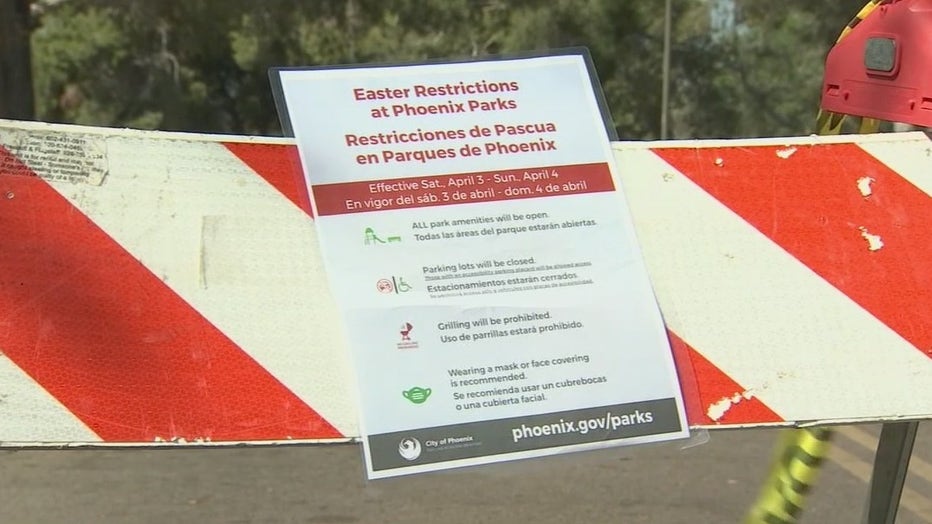 Parking restriction sign on a barricade at Roadrunner Park in Phoenix on April 3, 2021.

"They told us you can't park here unless your handicapped."

But that's not stopping people from enjoying Roadrunner Park. They're finding another way as cars lined up the streets near Cactus Road and State Route 51.

"We have to walk all the way back and it's hot. It would be unsafe for the people on the sidewalks, it can cause an accident."

Celeste says knew there would be restrictions, but she came with her family anyway.

"It's the public who's just been cooped up and we want to be released.. I think parks are a great way to do that.. congregating with your family is not, to me, putting anyone at risk. You're going to the restaurants, you're shopping.. you're still doing things.. I mean these are closed spaces, so to me, the parks should be accessible. We're tax payers," she said.

Families and people at the park on April 3 were social distancing and wearing masks when they were around others.

Arizona Gov. Doug Ducey escalated a long-simmering fight with Phoenix Mayor Kate Gallego on Friday by demanding the city drop its plans to close parking lots and grills at city parks to limit the spread of COVID-19 on Easter weekend.

The Republican governor said making it harder for people to use public parks would drive family gatherings indoors, where the risk of coronavirus transmission is higher. He announced that all state parks would be open and free on Easter.

"For some unknown reason, our state’s largest city doesn’t want you in your own public parks ... These parks belong to the taxpayers, not to politicians," Ducey said in a video on Twitter.

The governor’s letter comes as Arizona reported its largest daily increase in confirmed COVID-19 infections in three weeks with 940 additional cases, along with 12 more deaths.

Gallego, a Democrat, has been one of Ducey’s most pointed critics during the pandemic, saying he’s done far too little to slow the spread of the virus while tying the hands of mayors who tried to do more. She was among the first to criticize his decision last week to end mask mandates imposed by cities and lift restrictions on bars, restaurants, gyms and other businesses.

On Friday, Ducey turned the tables, saying he’ll blame Gallego if there’s a rise in COVID-19 cases in the coming weeks. Data show cases are already on the rise, and Ducey’s own public health director, Dr. Cara Christ, has said there could be an increase after the governor eased restrictions that have tamped down the spread.

Ducey has defended his actions as a measured approach that balances public health and the economy. He said his recent actions ending mask mandates and business restrictions are justified because cases and hospitalizations were declining and vaccinations are increasing.

Gallego fired back at Ducey, saying the governor was claiming authority he doesn’t have and selectively reading health recommendations. The Phoenix City Council approved the plan to limit park access in a unanimous, bipartisan vote more than two weeks ago, she added.

"Your letter this morning is not only surprising, but also legally wrong and scientifically unfounded," Gallego wrote.

City officials say parks will remain open but the parking lots will be closed except to people with accessible permits, and grilling will be prohibited on Saturday and Sunday. Those are typically the two busiest days at city parks, officials say, and the limits are meant to reduce the number of large group gatherings.

The move is illegal under an executive order issued by Ducey that blocks cities and counties from imposing public health restrictions more stringent than those imposed at the state level, Ducey said.

Meanwhile, state health officials are preparing to move the state’s largest COVID-19 vaccination site indoors as temperatures rise and plan to cut the operation from 24 hours a day to 12, Ducey announced Friday.

Ducey said the site will move April 23 from the parking lot of the Arizona Cardinals stadium in Glendale to the air-conditioned interior of the nearby Coyotes arena. It will run from 7 a.m. to 7 p.m., and will be capable of giving 1,000 shots per hour, according to the governor’s office.

State officials have said for weeks they were looking to bring the operation indoors. Plans were announced last week to move a smaller site in the East Valley indoors.

In a news release, the governor offered effusive praise to the Cardinals and owner Michael Bidwell, who let the public use the publicly funded stadium.

Arizona has now seen a total of 843,132 confirmed cases and 16,989 deaths since the start of the pandemic, according to the state’s coronavirus dashboard.

The Department of Health Services said Friday’s case tally included 120 newly reported from records that New Mexico provided on Arizona residents who were tested or treated in facilities in the neighboring state.

Even without those cases, Arizona’s daily increase was the largest since March 12, when 1,367 new cases were reported.

The state’s seven-day rolling average of new cases increased from 565 on March 17 to 601 on Wednesday, while the rolling average of daily deaths continued to drop, from 26 to 15 during the same period, according to Johns Hopkins University data.

Ducey on Thursday cited vaccination efforts and recent smaller daily increases of COVID-19 cases as he eased restrictions on elective surgeries and long-term care facilities. Those restrictions were put into place to free up hospital capacity for treatment of COVID-19 patients and halt the spread of the coronavirus among residents and workers at care facilities.

For weeks, Ducey has been withdrawing the restrictions he imposed to contain the spread of the virus. He drew scorn from local officials and hospital executives for his decision last week to end capacity limits at restaurants, open bars and nightclubs.

In another development, Pima County announced Friday it will expand COVID-19 vaccine eligibility to anybody 16 and older starting Monday. The change from 55 or older matches age-based eligibility at the county’s sites to that of state-run sites, including one on the University of Arizona campus in Tucson.