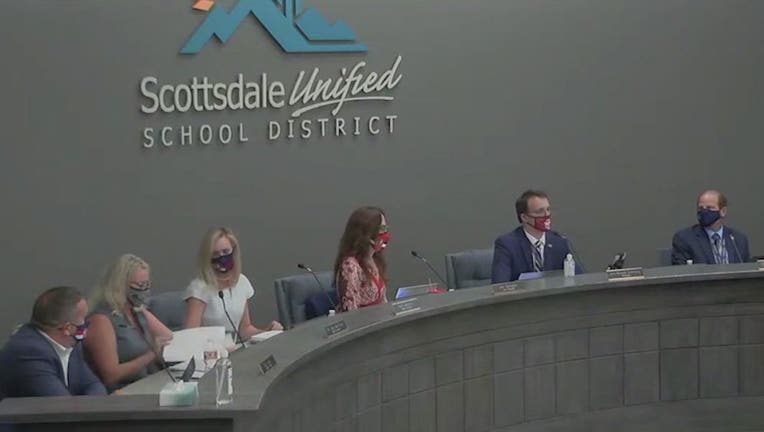 Members of the Scottsdale Unified School District Governing Board

SCOTTSDALE, Ariz. - Recall petitions for four members of the Scottsdale Unified School District Governing Board have failed, according to the Maricopa County School Superintendent's office.

On the website of the County School Superintendent's office, recall petitions for Patty Beckman, Jann-Michael Greenburg, Julie Cieniawski, and Libby Hart-Wells were listed under "failed applications for recall petition." All four petitions had a signature filing deadline of 5 p.m. on Dec. 18.

We first reported on the efforts to recall the four Scottsdale Unified School District board members in August. The four members targeted all voted in favor of reinstating a mask mandate for the district.

All but one of the recalls were filed by Patricia Lee Pellett of Scottsdale, according to publicly-accessible records on the County School Superintendent's website, with the recall for Beckman filed by Nicole Curtis, also of Scottsdale.

The recall petition for Beckman accuses the member of putting "the physical and mental health of students at risk" by voting for the mask mandate, as well as "violating parents' rights." Meanwhile, the recall petitions for Greenburg, Cieniawski, and Hart-Wells all accuse the respective board members of "disregard for the SUSD parents, teachers, staff, and especially the students."

"The mental and emotional health of many SUSD students [have] declined to an alarming level. The education of all SUSD students [have] suffered and continues to suffer. Parents are not allowed to have a voice in the upbringing, education, health care, or mental health of their children," read a portion of the recall petitions, which feature largely identical wordings.

The four recall petitions needed at least 20,935 valid signatures, under a formula prescribed by state law.

School board meeting rocked by disruptions in 2021

2021 has been seen some tumultuous times for the Scottsdale Unified School District's governing board.

In May, a school board meeting descended into chaos when attendees refused to wear masks.

"There were a lot of parents there, and a lot of parents weren’t wanting to wear the masks and put them on. But it was not about the masks, more it was about standing up for parent's rights," said Amy Carney with Arizona Parents Rights and Education, at the time of the incident. "We wouldn't have had this issue if our mask mandate had been lifted in Scottsdale Unified as well, so a lot of parents, I think, were pushing back on that."

"It's really disappointing to me that on a night where we had intended so much student success, we have had people in this room who have refused to comply with the school district's expectations for masks," one board member said at the time.

"We saw some of the same folks on the 18th at the SUSD Board meeting that they saw in Peoria, that they saw elsewhere. Same names, same faces, gathering supports or followers to participate in the meeting that are not connected to Scottsdale," said Chief Walther at the time.

On Aug. 24, concerns over the possibility of a similar protest prompted the board to hold a modified meeting.

"Staff members who are needed to address specific agenda items will be permitted in the Boardroom. However, no members of the public will be permitted in the room other than during the Public Comment section of the agenda. One individual at a time will be invited in to address the Governing Board," read a portion of a statement released to announce the modified meeting format.

During that meeting, Greenburg, who was then the school board's president, was heard uttering a profanity following a public comment by a parent, in which the parent accused school district officials of orchestrating a neo-Nazi incident on school campus.

"I just want to be very clear, for the record, that no employee was involved in the neo-Nazi propaganda incident. That is incorrect," Greenburg said, after an exchange with the parent. "That is a reference to a pre-existing investigation that was not concluded. It has since concluded, and no SUSD employee was involved."

Immediately thereafter, Greenburg quietly uttered the profane word, which was captured by microphones in the meeting room.

Greenburg apologized during a latter part of the meeting. 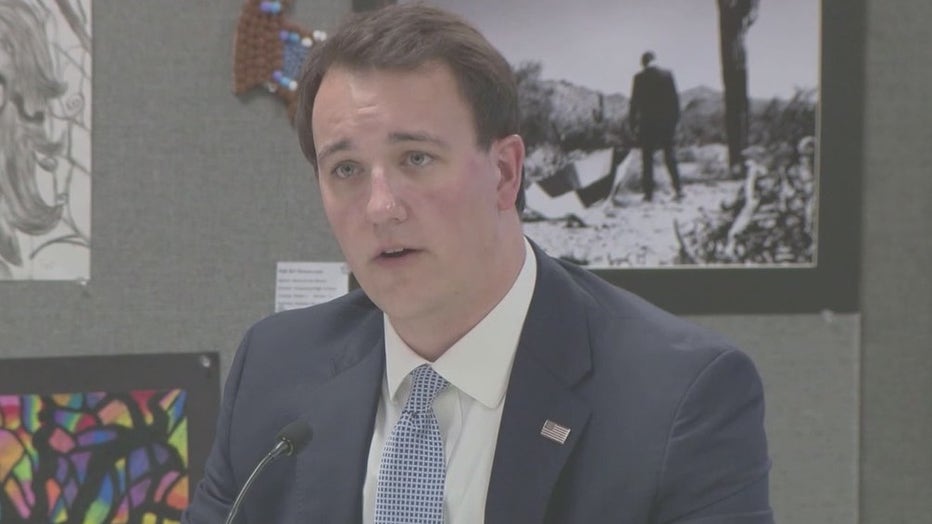 In November, Greenburg was replaced as board president following a dossier scandal, in which a Google Drive claimed by parents to be linked to Greenburg contains hundreds of personal documents and files on dozens of parents who were considered enemies of the board.

"Photos of people's children in there," said Amy Carney, who is a candidate for a seat on the school board. "Divorce documents, bankruptcies, mortgage statements. Really personal information that they were compiling on parents."

On Dec. 2, officials with the Scottsdale Police Department released a statement, stating that they have concluded their investigation into the incident.

Many school board recall petitions filed in 2021

Various reasons were listed for the recall of the 17 members, with mask mandates and Critical Race Theory being listed in a number of the petitions.

Related: What is critical race theory? Many struggle to define topic

Other reasons include the creation of a hostile work environment, alleged personal ethics issues, alleged malfeasance, failure to represent constituents, and alleged violation of legal obligations.