Things will dry out today in the Valley and we'll see a high near 98°F.

PHOENIX - Flash Flood Watches have been issued for all of Arizona as remnants from Hurricane Nora brought heavy rain to the state.

"Copious moisture from the remains of Nora moving into the region will still produce widespread TS activity across the region Tue/Wed.," NWS Phoenix said in a tweet.

Low-water crossings are particularly vulnerable to flooding while burn scars from past wildfires are a particular concern because they’re prone to flash flooding and debris flow, the weather service said. 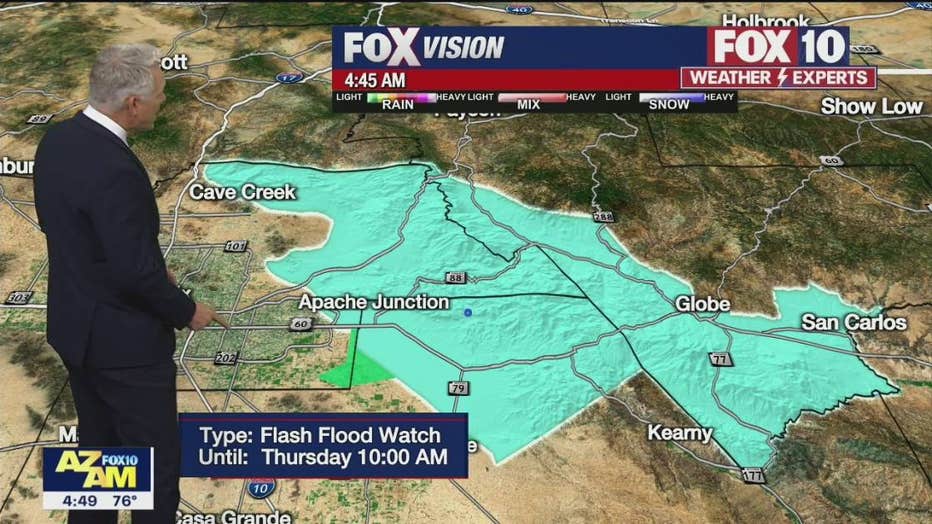 A Flash Flood Watch remains in effect until the morning of Sept. 2.

The Arizona Department of Transportation said particular areas of concern were southern Arizona, the Tonto Basin in hill country east of metro Phoenix and along U.S. 60 near Globe.

The department said its maintenance crews across the state have been preparing for the expected storms by clearing debris from drainage systems and checking the more than 55 pump stations along Phoenix-area freeways.

The Flash Flood Watch is scheduled to last until early Thursday morning for the Phoenix area.

RELATED: Monsoon storm making its way over Arizona once again

Nora had maximum sustained winds of 75 mph (120 kph) late Saturday, with tropical storm force winds extending out 105 miles (165 kilometers). It was centered about 50 miles (85 kilometers) north-northwest of Puerto Vallarta, and heading to the north at 16 mph (26 kph).

Forecasters warned that people along Mexico’s central and northern Pacific Coast should be alert to the dangers of flooding, mudslides and perilous surf. Authorities in Mexico’s Jalisco state, where Nora made a brief landfall crossing the cape south of Puerto Vallarta, said there were no early reports of serious damage.

The weakened remnants might bring rains next week to the U.S. Southwest and central Rockies, forecasters said.

The U.S. National Hurricane Center said Nora was expected to drag along the coast and gradually weaken to a tropical storm by Sunday night before heading into the narrow Gulf of California, passing close to the mainland resort area of Mazatlan. It was predicted to keep moving north, before weakening further and heading inland toward the Arizona border region.