Fire crews in the Phoenix area had to respond to dozens of fires during the overnight hours of July 5. A number of people were displaced from their homes as a result. FOX 10's Danielle Miller reports.

PHOENIX - Fire crews across the Phoenix metro area concluded the July 4th holiday weekend by putting out dozens of fires during the overnight hours.

We have learned that several people were displaced as a result of some of the fires, and one person was even taken to the hospital.

One of the fires, according to officials, broke out in the garage of a home in Glendale.

The home is reportedly located near the Loop 101 (Agua Fria Freeway) and 75th Avenue. The fire eventually spread to the car in the driveway, as well as the rest of the house.

According to fire officials, a man in his 60s had extensive charring to his face, and was taken to the hospital for burns and smoke inhalation. The man was reportedly going in and out of the home.

No other injuries were reported, and the cause of th fire is under investigation.

According to Phoenix Fire officials, a semi truck caught fire in the driveway, in an area near 51st Avenue and Thomas Road.

When crews arrived on scene just before 1:00 a.m., they found the front of a home on fire.

Fire officials said the truck caught fire for reasons unknown, and the fire eventually spread to the house. While no one was hurt, two people have been displaced as a result.

Glendale Fire officials said crews put out a garage fire in the area of Union Hills Drive and 51st Avenue. Four people were displaced as a result, but no injuries were reported.

Raelyn Staub was just getting home from celebrating the Fourth of July when she noticed flames coming from her neighbor's garage. It only took a couple of seconds for her to register that something was really wrong. FOX 10's Marissa Sarbak has the story.

It was a close call in San Tan Valley.

Raelyn Staub was just getting home from celebrating the Fourth of July when she noticed flames coming from her neighbor's garage. It only took a couple of seconds for her to register that something was really wrong.

"When I first came around the corner, I first thought like, ‘Oh why is Steve having a fire pit in his front yard? It's a million degrees out here,'" Staub said.

Then she realized what the fire really was.

She says, "I just busted in his door and I said, 'Steve, your house is on fire, come outside, let's get the hose.'"

Steven Pena says all the other neighbors had been enjoying fireworks together and didn't think too much after they put the remnants in a garbage can.

"After fireworks, we put everything into a plastic trash can, it was sitting out in the yard for a while," he said.

They didn't see any smoke or visible flames but less than an hour later they sparked again.

"We got really lucky," Pena said.

This is what he learned from the incident.

Everyone in the neighborhood is thankful that Staub was in the right place at the right time.

"His garage would have definitely been on fire. If I would have came home like 20 minutes later, it would have been in flames," she said.

Raw footage: Fireworks reignite in trash can after celebration

A man didn't know his fireworks had started a fire in his garage after being put into a trash can until his neighbor got home just in time to alert him before any damage was done.

According to Phoenix Fire officials, it is likely, but not confirmed, that many of the incidents they responded to are results of residents using fireworks during 4th of July. 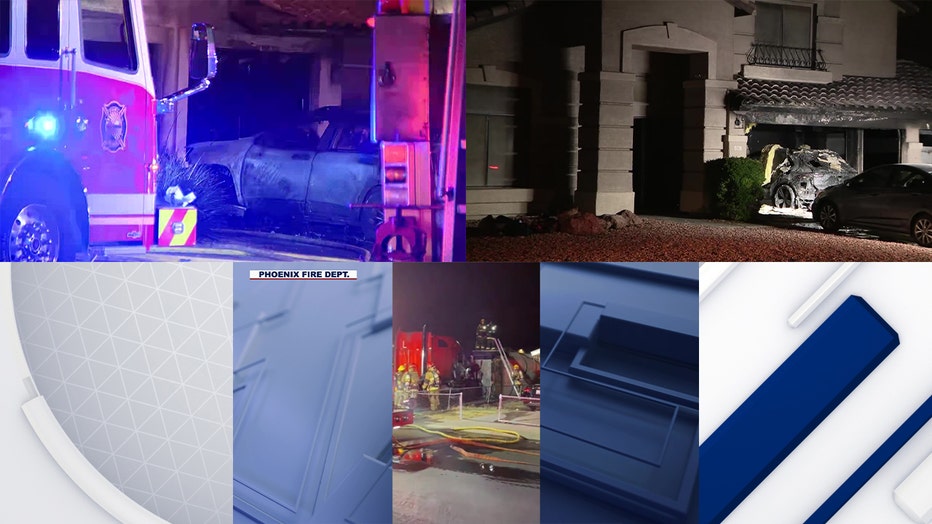