Peoria was one of the areas hit hardest by Aug. 18's storm. Some of those residents didn't have power for days. FOX 10's Marissa Sarbak has the latest.

PEORIA, Ariz. - Most Peoria residents have finally had power restored to their homes two days after the latest monsoon storm took down multiple power lines in the city.

At the height of the storm on Thursday night, around 10,000 homes in Peoria had lost power. Many of them finally got the lights back on Saturday.

APS emailed some Peoria customers affected by the downed power lines, writing that the "power outage may last multiple days."

"Recent violent monsoon activity has caused significant damage to electrical equipment in your area. Our crews are working to clear out the damaged equipment, dig fresh holes, set new poles, and restring wire," APS officials wrote in the email.

Peoria residents say this was one of the most intense storms they have seen this year.

"The lines are still down," said resident Johnny Lash. "They took the telephone poles out between yesterday and last night. Now they've got the new poles over there."

People are still cleaning up the damage and replenishing groceries that went bad over the last wo days.

"I threw most of the stuff away," said resident Josefina DeLeon. "I didn't want to take a chance."

After almost 48 hours without A/C, just about everyone has their power back on.

Schools canceled due to power outage

FOX 10's Danielle Miller has the latest on a storm Thursday night that tore down multiple power poles, wiping out electricity to thousands of homes.

School has been canceled on Aug. 19 for Cheyenne Elementary, Alta Loma, Peoria Elementary, Peoria High School and all the programs held on its campus.

"The campus does not have air conditioning, lighting or safe access to the school parking lot or buildings," officials said. "We ask that parents please not send their children to school, even once power is restored." 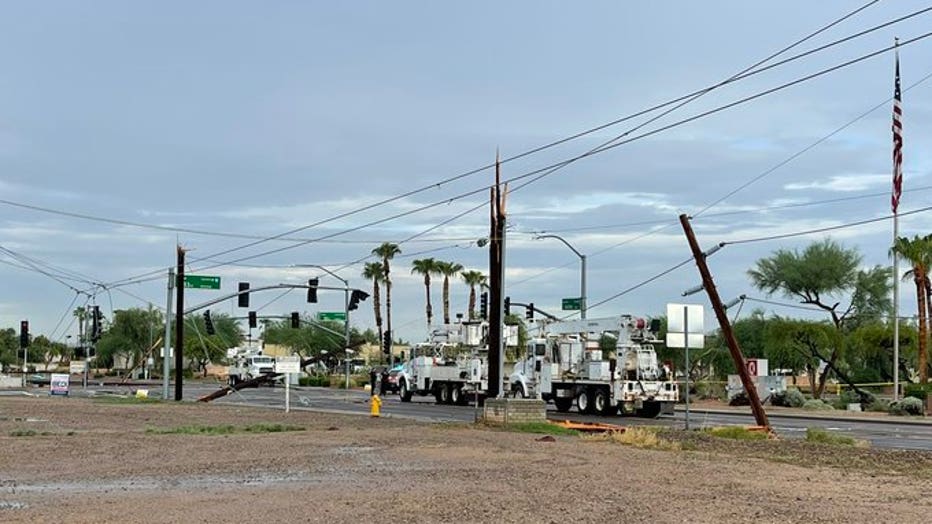 Some residents in Peoria could be without power for "multiple days" after the latest monsoon storm made its way through the area, knocking down power lines on Aug. 19. (Danielle Miller)

A Flood Watch is in effect for the Valley as we'll see more rain and a high near 98°F.