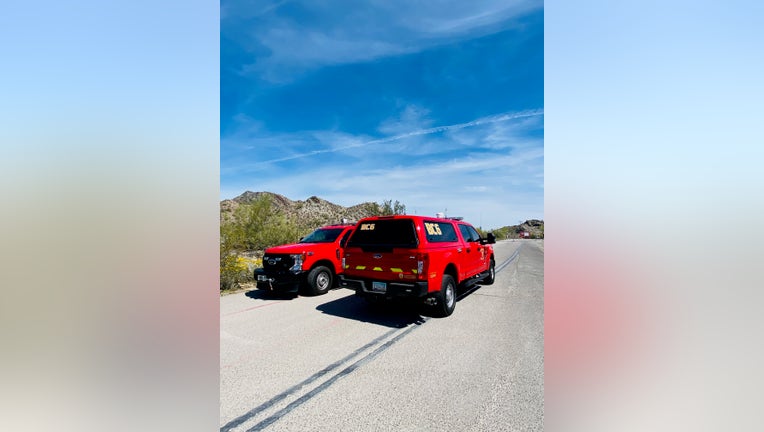 Photo of a rescue at Dreamy Draw Trail.

PHOENIX - It's been a busy Sunday for Phoenix firefighters after first responders conducted three nearly simultaneous hiker rescues in one afternoon.

Fire crews visited South Mountain, Dreamy Draw Trail and Piestewa Peak on March 27 to help three hikers. All of them were between the ages of 20 to 24, officials said.

This comes as Phoenix is experiencing its first 90-degree weekend of the year. The city just broke a heat record on Friday after reaching 94°F, breaking a record set in 1988.

A 23-year-old hiker had to be rescued after falling from his bike two miles from the trailhead, fire officials said.

He sustained a shoulder injury and reportedly had to be treated with an IV due to dehydration.

"He was then assisted down the trail to an awaiting ambulance where he was transported to a local hospital for further treatment and evaluation," officials wrote in a statement.

A 20-year-old woman was loaded onto a big wheel and lowered down the mountain after she injured her ankle while hiking.

Fire crews she was also suffering from dehydration. She reportedly is in stable but weak condition.

Fire crews say a 24-year-old man needed help getting down South Mountain after rolling his ankle while trail running alone.

"Firefighters arrived on the scene and hiked in approximately 1 mile to find the patient in stable condition but needing assistance to walk down the remainder of the trail," officials said.

He was found to be in stable condition and refused to be taken to a hospital.

Tips for hikers to stay safe in Valley heat

As temperatures continue to rise in Arizona, firefighters want to make sure people are staying safe while hiking. FOX 10's Desiree Fluellen has more on their "Hike Right" campaign.

As temperatures rise, so do the number of calls for mountain rescues. So to inform people about the safety measures to take when hiking during hot weather, Valley firefighters started the "Take a hike. Do it right" campaign last year to stress safety.

"It’s real imperative that you hydrate before, during and after your hike and pick that cooler part of the day," said Capt. Todd Keller with Phoenix Fire. "Maybe early in the morning and maybe later at night."

Firefighters say the biggest items to watch for are heat cramps, heat exhaustion, and heat stroke.

Not only should hikers prepare themselves for the heat but also for canine friends that may also be tagging along.

On average, a dog's coat can get up to 30 degrees warmer while hiking in hot temperatures, and the rocks beneath their paws can become nearly unbearable for them.