If realized, the proposal would not only link up two of Arizona's largest metropolitan areas, but it will also link the Valley from end to end. FOX 10's Steve Nielsen reports.

PHOENIX - It's been decades since the Amtrak logo road the rails into Phoenix.

But with a signature in Washington, D.C., that could change.

"I think it could be transformational," said U.S. Secretary of Transportation Pete Buttigieg.

Part of the $1.2 trillion infrastructure deal nearing completion at the capitol would set aside a long of money for Amtrak.

FOX 10 spoke one-on-one with Buttigieg to get an update on the massive proposal.

"It has the biggest investment in passenger rail since Amtrak was created in the first place," he said. "Some of that is about repairing what we got because there's a backlog. Some of it is about expanding service in new areas and high-speed service." 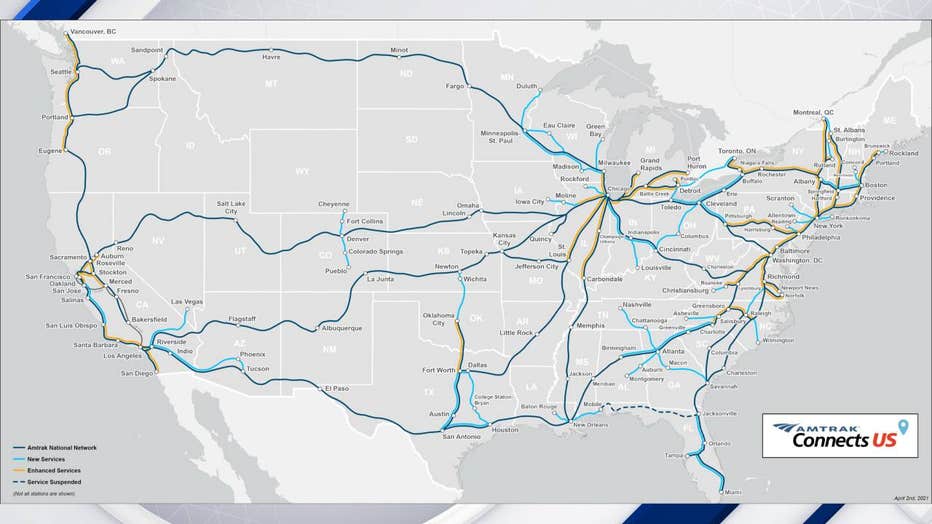 Amtrak’s proposed 2035 map shows expanded rail service by Amtrak, which would include at least 30 new routes and added trips to existing routes.

One of those new areas would be the Valley of the Sun.

With stops from Queen Creek to Buckeye, including Downtown Phoenix and Sky Harbor.

Finally, it would connect Phoenix to Tucson and Los Angeles.

Buttigieg said reliable high speed is the norm in many countries, but not the U.S.

"I don't know why Americans have to settle for less," he said. "We ought to have the best and it can make a big difference in a region like Phoenix or really across the Southwest."