We'll be providing up-to-date information on candidates, their progress in respective races and results as they come in.

This wraps up our live blog coverage of the primary election. Be sure to check https://fox10phoenix.com/elections for all the latest results of the Federal, State, Legislative races, along with Maricopa County Attorney, and Fountain Hills Mayor.

With more votes counted, the general election matchups in Arizona continue to take shape, including who will be running to lead the state.

Two major races were called last night, including the Republican race for governor. The Associated Press called the race for Kari Lake, after the Maricopa County Elections Office added 75,000 votes to their totals.

Lake is ahead by 3 percentage points right now, 47% to 44%, extending her lead over Karrin Taylor Robson to about 20,000 votes. The additional votes pushed Lake ahead in Maricopa County, meaning she won every county in Arizona on her way to the nomination.

Finchem was backed by former President Donald Trump and has pushed claims that the 2020 election in Arizona was stolen. Those claims have been debunked.

Fontes is the former Maricopa County Recorder who lost his re-election bid for that position in 2020. 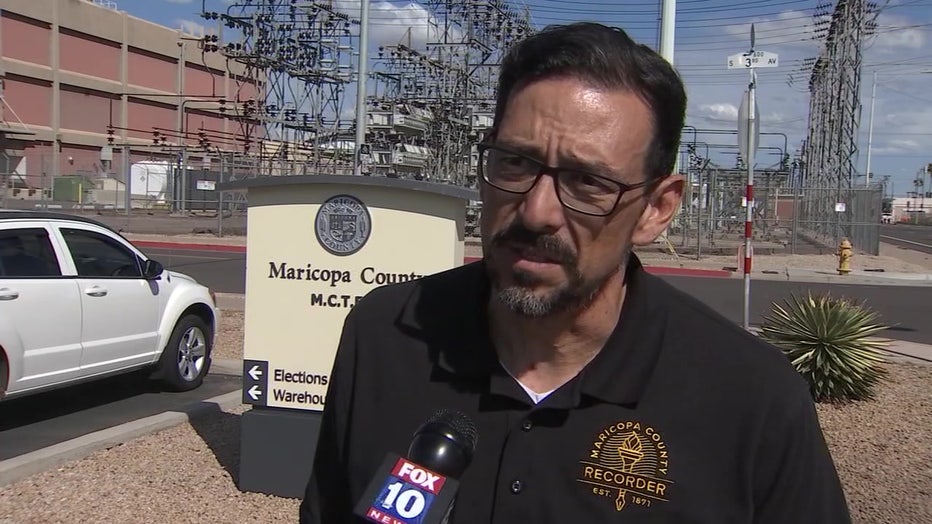 Adrian Fontes, in an interview he gave in 2020. At the time, Fontes was the Maricopa County Recorder.

The Associated Press (AP) is projecting former Maricopa County Recorder Adrian Fontes as the winner of the Democratic nomination for Arizona Secretary of State.

The AP is projecting Kari Lake as the winner of the Arizona GOP gubernatorial primary. This means Lake and incumbent Secretary of State Katie Hobbs (D) will run in November to succeed Doug Ducey as Governor.

Maricopa County is answering questions about the vote count process on Twitter. 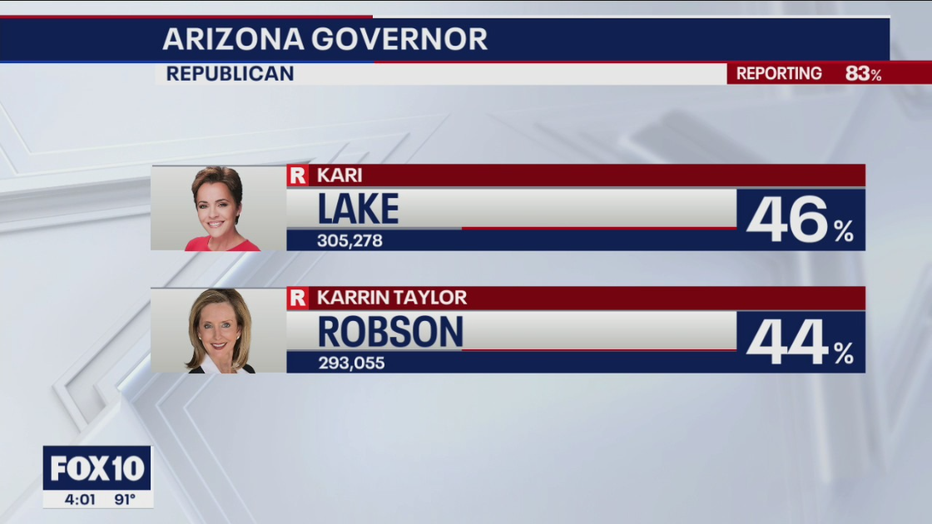 Kari Lake maintains a lead of 2 percentage points in the Republican gubernatorial primary, which is around 12,000 votes. More than 83% of the ballots have been counted already. According to the Maricopa County Recorder's Office, less than 100,000 early ballots remain to be processed. We're expecting another drop of votes to happen around 7 p.m. 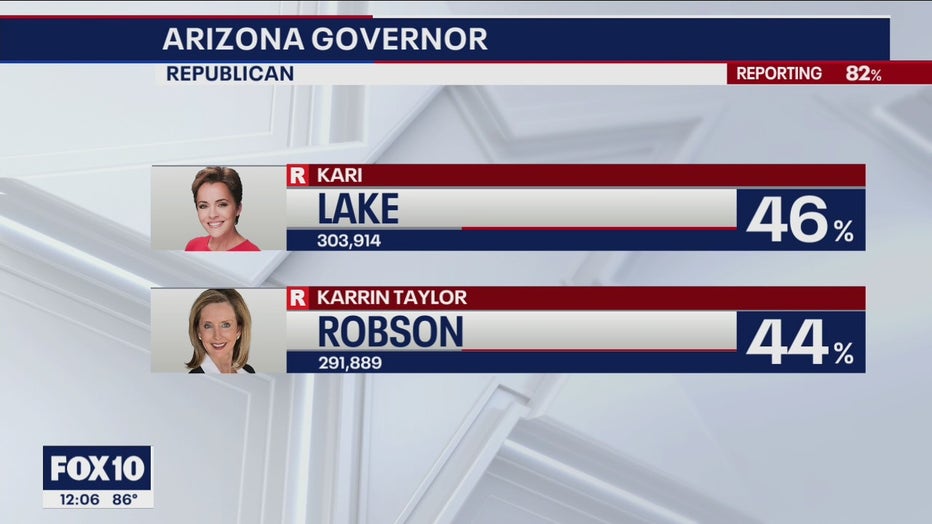 More than 24 hours after the polls closed in the Arizona Primary, votes are still being counted and the Republican governor's race is still too close to call.

Kari Lake continues to lead Karrin Taylor Robson by 2 percentage points. 82% of the ballots are counted. About 12,000 votes separate the two.

Maricopa County says they have about 92,000 early ballots left to process and tabulate and another 50,000 that still need to be verified. We're expecting more results tonight around 7 p.m.

The latest numbers on a few of the races: 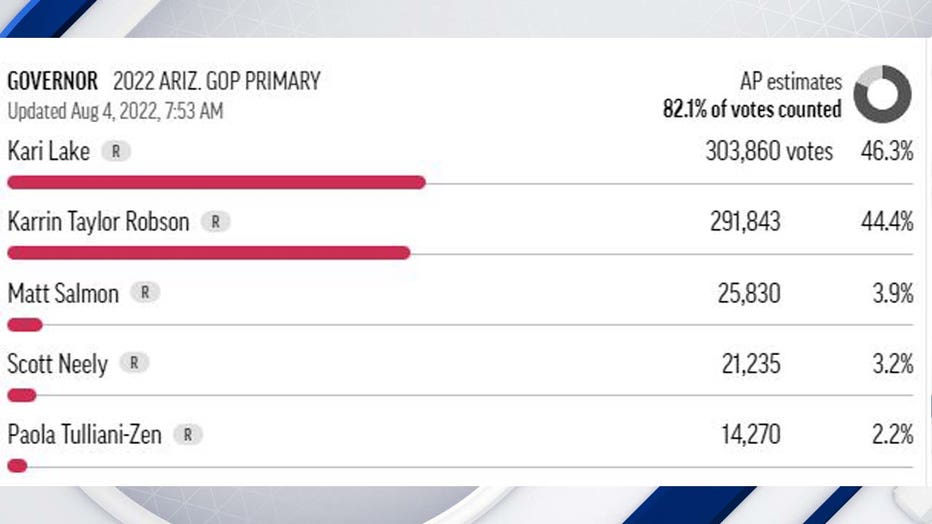 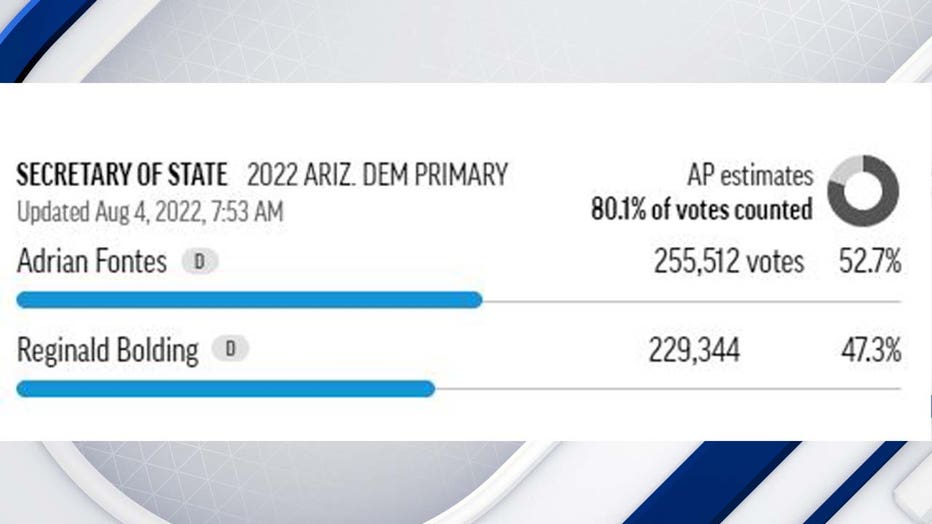 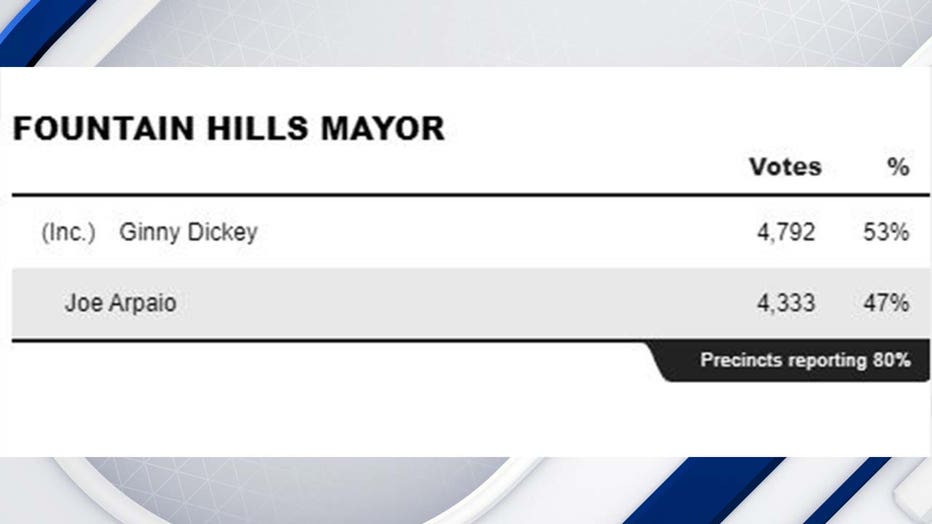 Get the latest results from congressional races here: https://www.fox10phoenix.com/elections

This wraps up our election coverage for tonight (August 3). Check back tomorrow morning for more elections-related news, as well as the latest results.

In Arizona, candidates backed by Trump, by and large, won their respective primaries, but how might they fare in November, when voters of all parties vote on one ballot? FOX 10's Marissa Sarbak spoke with political analyst Chuck Coughlin on what they might do.

2022 Elections: Expert weighs in on what's next for Trump-approved candidates who won their primaries

2022 Primary Elections: Expert weighs in on what the races mean for the state

Kari Lake has declared her victory in the Republican race for Arizona governor. Meanwhile, the Associated Press says the race is still too close to call.

The gubernatorial race is too close to call. More than 100,000 early ballots are still waiting to be counted in Maricopa County. With 80% of precincts reporting, Kari Lake leads Karrin Taylor Robson by 2%. 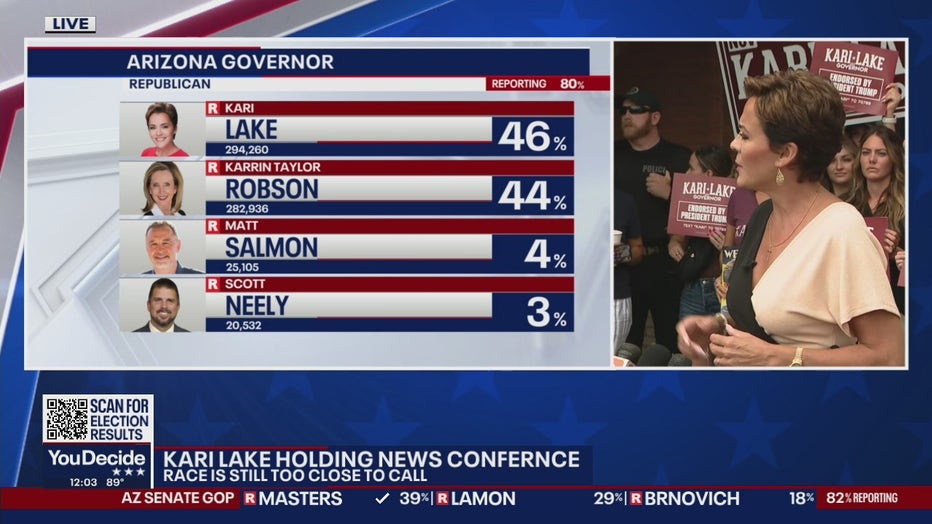 The Pinal County Recorder's Office is expected to provide an update on their primary election issues. We talked to a number of residents who say polling centers didn't open on time and some were running out of ballots. Both the Republican National Committee and AZ Democracy Resource Center are now looking into the election problems voters faces in Pinal County. A briefing will take place at 1 p.m. at the courthouse in Florence.

According to Pinal County, 20 precincts asked for more ballots during yesterday's voting hours. Officials say the shortage was due to an unprecedented demand for in person ballots.

Meanwhile, more than 130,000 ballots in Maricopa County still need to be processed and tabulated. This could take several days.

It's the day after Election Day, and ballots are still being counted. For some races, it's still too close to call. FOX 10's Nicole Garcia reports.

One of the other big races that is sure to be among the most expensive in the nation is the Senate race. Trump-backed candidate Blake Masters will take on Democrat Mark Kelly in November. Kelly currently holds the Senate seat and the race is expected to be highly competitive. 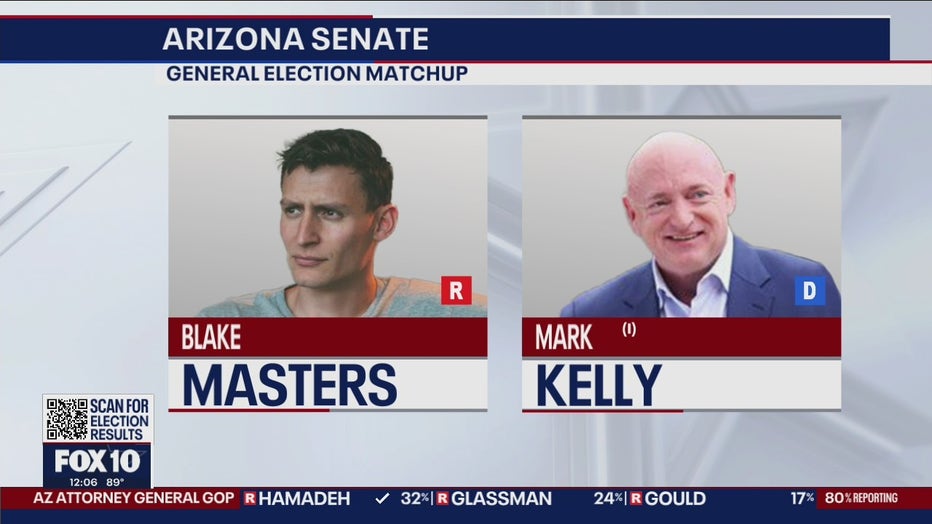 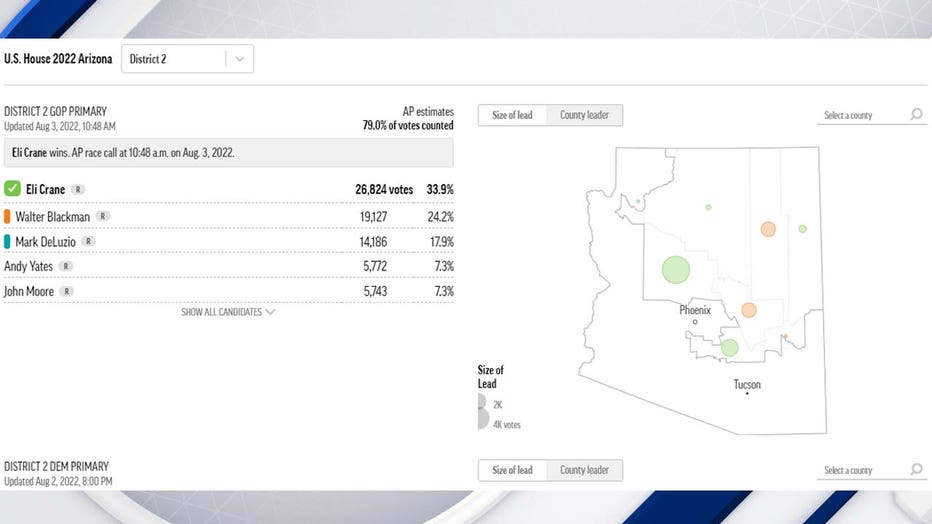 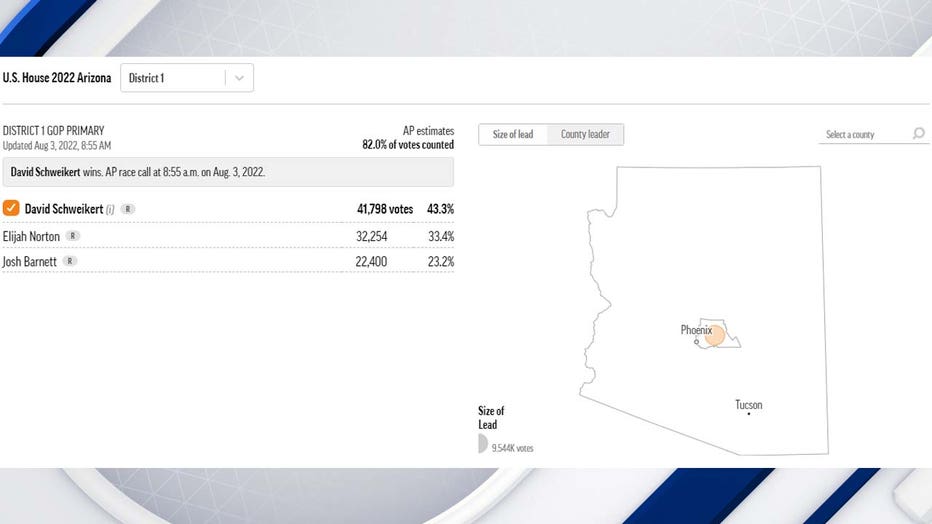 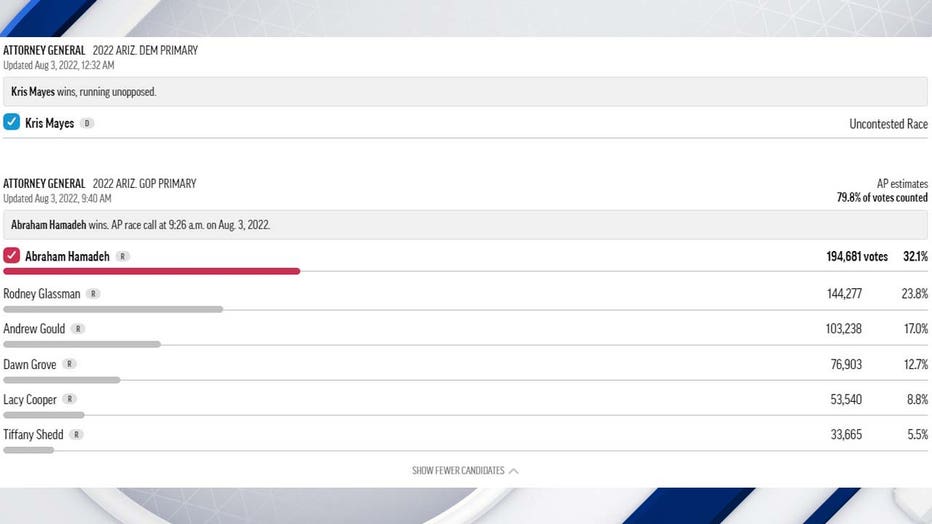 The AP has projected that Mark Finchem has won the Republican nomination for Secretary of State. The Democratic race is still too close to call.

Mark Finchem has beat out three other GOP candidates in the race for secretary of state, according to a projection from the Associated Press. Read the full story here.

An overnight update on Arizona's most closely watched congressional races.

This wraps up our election coverage for tonight (August 2). Check back tomorrow morning for more elections results.

Masters is one of a number of candidates in the GOP primary for this year's U.S. Senate election. No news agencies have made a projection on the Arizona Republican Party Senatorial Primary, as of 11:20 p.m. on Aug. 2. Whoever wins the GOP primary will face incumbent Democratic Senator Mark Kelly in November. Kelly ran unopposed in the Democratic Party Senatorial Primary. 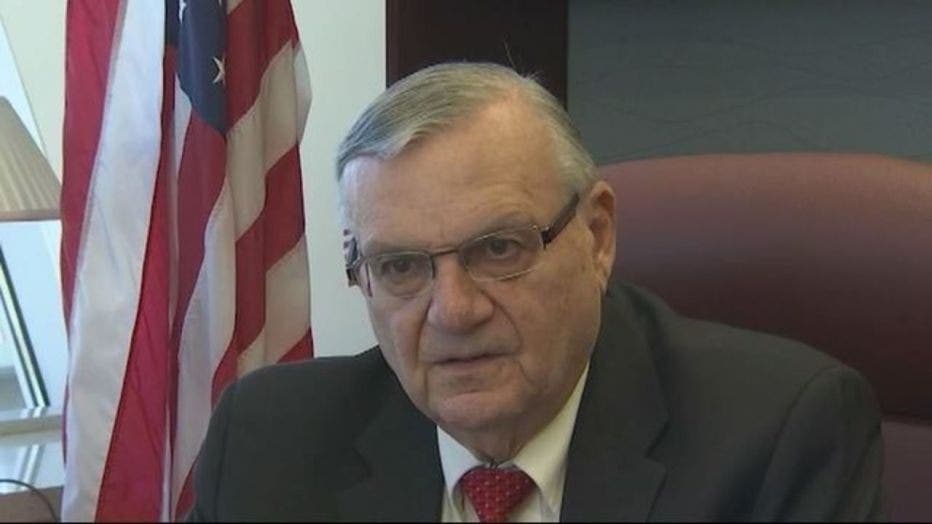 Former Maricopa County Sheriff Joe Arpaio is trailing his opponent in the race to be Fountain Hill's mayor.

The former sheriff said during the late night hours of August 2 that the vote totals so far came from early ballots, and he was awaiting the totals of in-person voting.

If Arpaio loses in the mayoral election, it would mark his fourth electoral defeat in recent years.

Voters narrowed the list of 15 candidates in the primary election Tuesday.

The Navajo Nation is the largest Native American reservation in the U.S., extending into New Mexico, Arizona and Utah. The candidates pushed platforms that included economic development, ensuring that basic needs such as running water and electricity are met and finding ways to preserve the Navajo language.

FOX 10's Marc Martinez and Ellen McNamara spoke with political consultant Charles Coughlin on the ballot count so far in the primary election, as well as the state of both leading campaigns in the GOP primary for governor.

The Associated Press is projecting Kirsten Engel to win the Democratic primary in Arizona's 6th Congressional District. That district covers portions of Cochise, Graham, Pinal and Pima Counties, as well as the whole of Greenlee County.

Lake is running against Karrin Taylor Robson and a number of other candidates for the Republican Party nomination for Arizona Governor. The state's current governor, Doug Ducey, cannot run again due to term limits.

Karrin Taylor Robson is running against Kari Lake and a number of other candidates for the Republican Party nomination for Arizona Governor. The state's current governor, Doug Ducey, cannot run again due to term limits.

FOX 10's John Hook and Christina Carilla spoke with political consultant Charles Coughlin, who breaks down the election results, as it stood at around 9:30 p.m. on August 2, 2022.

Michelle Udall released a statement. She is one of five candidates, including write-in candidates, in the GOP primary for Superintendent of Public Instruction

The question now, in terms of the ballot counting process, is what happens from here on out?

According to a statement released by the Maricopa County Elections Department, they will publish in-person Election Day results as they are returned from each of the 210 Vote Centers throughout the night. They estimate 106,000 ballots were cast in person on Aug. 2.

"Starting Wednesday, August 3, the Elections Department will begin to signature verify and process the early ballots dropped off on Monday and at the polls today. We’ll update unofficial results daily by 7:00 p.m. until all verified ballots are counted. We’ll also provide a daily update of the estimated ballots left to count," read a portion of the statement.

Elections officials say they can't complete counting until after the Aug. 9 statutory deadline for the following:

The last line, written in Spanish, translates to "It always seems impossible until it becomes reality."

Katie Hobbs, who is Arizona's incumbent Secretary of State, is projected by the Associated Press to defeat former Nogales mayor Marco Lopez in the Democratic gubernatorial primary.

The first batch of election results are released. Click here to view them.

Polls have officially closed in Arizona.

FOX 10 has received several calls and emails on Election Day from viewers saying they had issues with the voting in Pinal County, in-person. Some people said they couldn't get a ballot to vote because some locations ran out.

It's Election Day in Arizona and voters from around the state are heading to the polls for the 2022 Primary. Voters will decide on candidates for governor, senate, congressional races, and dozens of state and local contests. Many voters have already cast their ballots, but plenty of people are still showing up tonight at the polls.

The AP is projecting that Katie Hobbs has won the Democratic Party gubernatorial primary.

Not finding information on a race you're looking for? Click here.

What to watch in the Arizona Primary Election

Arizona, which Democrat Joe Biden narrowly won in 2020, is a top target for former President Donald Trump, who tried in vain to get his defeat overturned. He has endorsed a slate of candidates up and down the ballot who have promoted his false claims of a stolen election.